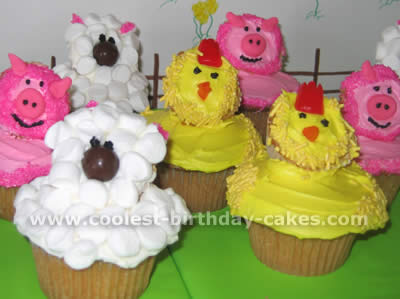 My daughter loves animals, so for her 2nd birthday I decided to go with a Barnyard theme. I made a Cow cake and farm animal cupcakes – chicks, pigs and sheep.

To make these cute cupcakes, make several regular size and several mini cupcakes. Separate the icing and dye some pink and some yellow. Frost all cupcakes before placing mini cake on top.

For the feathers on the chicks, use yellow sprinkles or jimmies. The crowns on chicks were red gumdrops and the beaks were orange gumdrops. The nose and ears on the pig is pink fondant. The sheep were iced white and a Whopper was placed for nose/mouth and mini marshmallows cut in half were placed around the Whopper and on the larger cupcake for the wool.

Black icing was used for eyes and noses on all. I hope you have as much fun with these as I did! I’m making these cute cupcakes again for Easter!