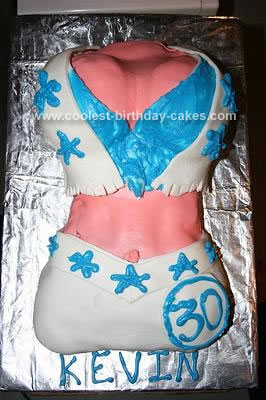 I made this Cowboys Cheerleader Cake for my boyfriend’s 30th birthday because he loves The Dallas Cowboys (and cheerleaders!)

This was my first ever cake, and except for actually making the fondant (which I found instructions online), I made the rest on a whim and it actually turned out pretty good!

I used two 8.5×11 sheet cakes with yellow cake mix. I used 2 tubs of chocolate frosting. I made the fondant with instructions I found on the internet (I’m sure store bought fondant would work just as well), 1 can of blue frosting (very similar to a cheez whiz can!)

I covered a piece of cardboard in tin foil to put the cake on. I stacked both sheet cakes and filled with chocolate frosting in the center. Then I cut the sides in to shape the torso. I was having a hard time with the yellow cake, it wanted to crumble a lot, so I just frosted top with chocolate frosting after I shaped it. I figured this would help the fondant stick (but now after researching more I probably would have done the butter cream if I had known). Then I used 2 chocolate muffins from Costco for her bust (they were the perfect size, and they taste really good too!)

I made white fondant and I bought some peach food coloring for the skin tone, but it ended up being a lot more red than I thought. I cut out a section of the peach fondant for her torso and chest area and laid it down first. Then I cut a V shape in the white fondant and laid it down for her shorts, and I cut the excess off the edges after it was laid on. I cut two triangle shapes for the top, and overlapped them in the middle to make the “tie” to her top, again cutting off any excess over the edges. Then laid over another layer for the jacket. I cut the ends with scissors for a fringed look. I went back and colored in the exposed part of the tie top with the blue spray frosting.

I made a belt out of the white fondant and laid it over her shorts just to give it a little more dimension for the belt, then added all the blue touches with blue frosting that was in a spray can! Added some contours for abs, and a ball of fondant for the belly button.

Finally I had some extra fondant so I made a circle with the number 30 on it, kind of like it would be her “try out number” and attached it to her shorts. Topped it off with 2 strategically placed sparkler candles shaped as stars.

All in all I thought it turned out really well considering I had no experience and just played most of it by ear. Now I want to keep practicing and making even better cakes!

Feel free to let me know if you have any questions!