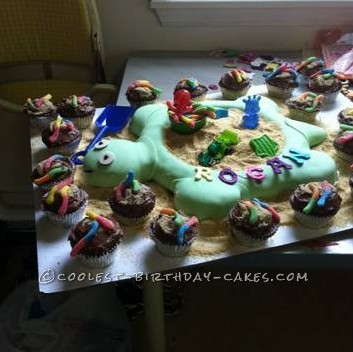 My grandson turned 2 and his favorite thing to do was play in the sand box, so I decided to make a turtle sandbox cake, just like the one he played in. It was not as hard to do as I thought it would be. It was a big hit with all the kids but one.  He wouldn’t eat it because he thought it was real sand. We gave the kids small dollar store shovels and they were allowed to did in the cake and eat it at the same time.  They had a blast. One little girl told her parents that she wanted a “dig in the dirt cake to”.  Now we all call it the dig in the dirt cake.

I did learn another lesson with this cake. I made cupcakes with gummy worms. Gummy worms melt in the sun. What a mess!  So if you use gummy candy make sure it’s inside.