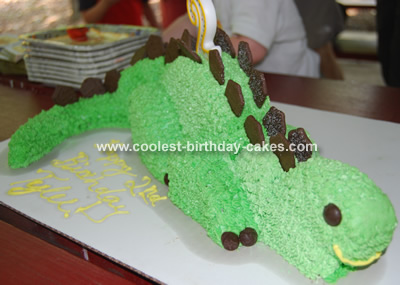 Given my son’s love of dinosaurs I decided to attempt to create a stegosaurs birthday cake. I searched a lot of sites and found great ideas – especially from this site. For future moms, I thought I would share my creation.

I made three homemade 9″ round pans of chocolate cake. I made one full recipe and divided it into two pans. For the second I made twelve cupcakes and used the remaining batter in a 9″ round. This gave me plenty of cake to work with, just in case the cutting wasn’t perfect. I had the most trouble with the head which kept falling down.

I baked the cake a day before decorating to allow it to cool and set. Someone recommended that I freeze them slightly to help with cutting too. Although, I didn’t do this – I will try it next time. I cut one round in half to make the back. Then I cut a sliver moon shape from another round to make the tail. the legs and head I free cut.

I coated the cake with a crumb layer of icing that was dyed green. I also used the icing to join the parts together. I made my piping icing. After the crumb coat I refrigerated the cake to let the icing firm up. Then I piped the cake with a star tip. This was time consuming but it covers up any crumbs! I used oreo thin crips for the spikes and was going to put on candy corn for the end of the tail but had forgotten to buy them! I used chocolate chips for the toes and eyes and I piped on a mouth.

One thing I would add is toasted coconut grass or something like that because the chocolate cake oil started to saturate the cardboard cake board I used. I know a lot people also put down a layer of aluminum foil over cardboard which is another idea.

It was a lot of fun to see my son’s excitement over the cake and know that I made it! I also used a larger tip to make cupcakes (chocolate and butter) – I did multi colors for the icing, used dinosaur cupcake liners and topped each one with a dinosaur figurine.

We had dinosaur stickers for the kids, as well as dino plates and napkins. It was tons of dino fun!

For food we had lots of herbivore and carnivore options for our picnic. Have fun!