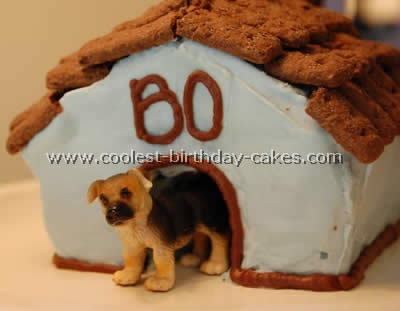 For my son’s first birthday I did a dog house cake. I wanted him to have his own cake for him to dig into so I created a dog house for him and then a large oval sheet cake for the others.

Dog House: I baked the cake in a small loaf pan. Place in freezer for cake to harden to make it easier to cut. After cake is firm cut to desired length. I cut the dog house to about half the size of the loaf pan. Next I trimmed the roof into a point. Then scoop out some of the cake to create the door for the dog house. Next you are ready to ice the cake.

I used a sour cream icing from Southern Living cookbook, very yummie and not too sweet! Tint icing to desired color. Next begin layering chocolate graham cracker sticks for the roof, starting at the bottom and working your way to the top of the roof. I found the dog figure at Target. I wrote my son’s name on the front of the dog house and then it was finished.

Large Oval Sheet Cake: for the big people’s cake I used a large roast pan and then trimmed the cake into an oval to match the oval decal I made for my son’s shirt, image included. I iced the cake in the same blue color and then trimmed the sides with Scooby Doo graham crackers that are shaped like doggie bones. These were both very easy to make and a big hit with all especially the sour cream icing!