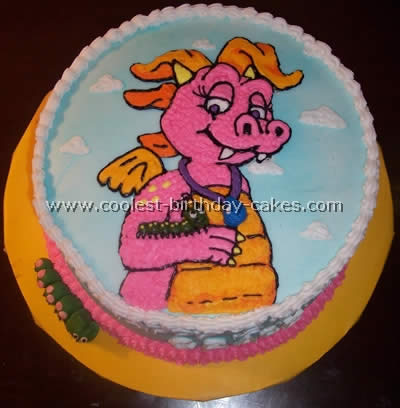 This is a 9 inch two layer Orange Crème cake. All iced in homemade buttercream icing. Cassie is drawn using #3 and #4 tips. There is a fondant caterpillar placed on cake board.

The idea came from a Dragon Tale cake that I saw and also from a previous cake that I’ve made, changing the picture slightly and adding the adorable caterpillars.

This is for my daughter’s 3rd birthday. It’s a 12″ yellow cake with sprinkles baked in (like fun-fête). I hand drew “Cassi” on the cake and used a basic star tip-16 to fill in the design and finished with a tip 3 to pipe details. I found some of the ideas for Dragon Tale cakes on your website!

This was a really fun cupcake cake, my husband’s idea mixed with my creativity. My daughter wanted a Cassie (from Dragon Tale) cake. I had a picture from the internet and enlarged it to the size of about 24-26 cupcakes to get the general idea of the shape I needed to place the cupcakes in.

I used the largest tip I had to frost all of the cupcakes with a general circle, then on the cakes that made the face and neck I smoothed the frosting together. Then I piped the tops of the eyes and nose with just the frosting bag and air brushed the color, I have done this with colored frosting as well. Then pipe the hair, the wing and the badge with a large tip. Finish with the eyes and teeth with white and outline with black to make them stand out!!

This one was my attempt at Cassie, from the PBS Kids show, Dragon Tale. I used the Wilton dinosaur cake pan and used two boxed yellow cake mixes. While cooking, I enlarged a coloring book photo of Cassie and drew a sketch of her that fit the pan size. I took some web images to make the icing colors. I used cream cheese icing out of a store-bought tub and tinted it with food coloring in pink, 2 shades of yellow, and a dark grey.

After it cooled, I leveled off the bottom of the cake and saved the extra cake for the wings. I just cut them to shape and attached with a bit of icing.

I used a large spreader to give the edges a thick layer of white icing and didn’t worry about overlapping onto the center. Then I used the small star tip for most of the body and the straight piping tip for outlines, eyes and eyelashes, etc.