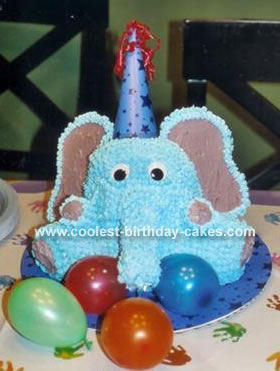 To make this 3D elephant cake, I used the Wilton 3D bear cake pan. After the cake was cooled, I cut off the bear ears. Then I iced the cake smooth with a blueish grey icing.

With some fancy paper, I fashioned a party hat and taped it together. I attached some ribbon to the top. I also covered a cake circle in the same paper. I also took some medium weight cardboard and drew one elephant ear by freehand. I cut it out, and cut out a second ear using the first one as a stencil.

I used a rose colored icing to cover the front of both elephant ears. Once that dried completely, I inserted the ears into the cake using toothpicks which were taped to the cardboard.

I then piped stars over the entire cake (except for the palms of his feet) using the same blueish grey frosting. I also piped stars on the back and borders of his ears. I filled in his palms with the rose colored frosting and smoothed it with a finger dipped in cornstarch.

For the trunk, I took a bamboo skewer and threaded several large marshmallows onto it, and shaped them into a trunk. I inserted this into the cake and covered it with frosting. In order to support the weight, I put a balloon under the elephant’s trunk and also decorated the area around the cake with balloons.

Finally, I placed two googly eyes that I purchased in the craft section of a craft store onto the elephant’s head.