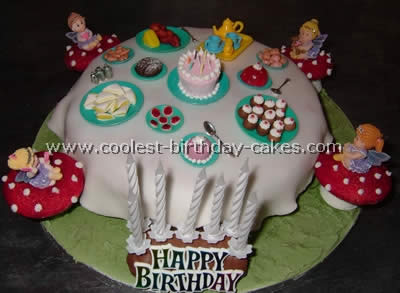 Fairy cakes are simple if you like fiddly jobs like making tiny sandwiches and cakes out of icing and flower paste. I used my daughter’s Barbie plates and admit the teapot etc. on the tray is Barbie’s too. The fairy birthday cake is made from a pink marshmallow with icing strand (we call them sprinkles in the U.K but they are in a shaker pot that you can pour over ice-cream etc!). You can make all these in advance and just buy white and use food coloring as you only need tiny amounts.

Ice the little cakes and ice a blob on top of half a cherry to make a jelly. The cake is a basic round sponge filled with buttercream and jam. Then the cloth is just sugar paste and cut the edge wavy – more authentic. The fairies are resin ballerina and I just stuck wings on to transform them into fairies. These are just peel off stickers (used in card making (and stuck onto pretty paper – to make wings). The toadstool stalks are made from a white marshmallow and the tops are Jaffa cakes turned upside down and painted with red food coloring. Then just pipe white dots over – perfect!

It was such fun making these fairy cakes, no parts were stressful at all and it looked really effective.

Jessica, my daughter has recently become obsessed with pretty princesses and fairies so this was the inspiration behind the design. It went into nursery to help her celebrate her second birthday with her friends.

I have never made fairy cakes before so firstly I sketched out the design on paper – making it as simple as I could but without losing it’s appeal. When satisfied with the image I then placed a sheet of baking paper over the top. Carefully I traced the outline using black icing. Once this was then semi dry I added the colour and detail (edible jewels glitter icing and stars).

Top Tip 1: ensure that the icing is not too thin as it makes it harder to control when piping out and makes peeling it from the baking paper impossible. Top tip 2: Make sure all the icing is completely dry before attempting to remove from paper. Top tip 3: attach to cake using butter icing, this helps to support image and give it a relief appearance.

I got the cake idea from a picture I saw on the internet of fairy cakes. I used their idea for a lot of the cake but instead of frosting I used fondant from Wilton’s. It was ready made; I just colored it purple and green with food coloring.

I made the butter cream from scratch, which was a Wilton’s recipe. I bought the stars. They were pre made. I did the swirls with butter cream frosting that I colored purple and pink. The way I put the cake together I got from a Web site where they show you step by step instructions. On the cake I made I put a layer of chocolate cake and then yellow cake and the filling was a strawberry one. This was my first doll cake and I think it turned out well.

Cake by Eliza T., Portland, OR

I prepared this cake using the Pampered Chef large batter bowl. I used a Pillsbury Funfetti cake and Pillsbury vanilla frosting. The idea came because I had just moved and couldn’t find my 9 x 13 baking pan and I needed to bake a cake for my niece’s birthday party.

So I went and bought an Elina Fairytopia Barbie (her favorite) and some pink decorating flowers and frosting. I made a very small hole (about 1″ wide and 5″ deep) in the top of the cake then I wrapped the Barbie’s legs in plastic wrap and put her down in the cake. I then covered her skirt in frosting and used the pink frosting as decoration and put sprinkles all around the base to look like a sparkly ruffle.

This was my very first attempt at making a fairy cake. The idea for her decoration was straight out of my head and I think she turned out beautifully. My tip would be to let the cakes completely cool before decorating and refrigerate afterwards for about an hour to set the frosting.

Good luck with your own fairy cakes!

For this cake you will need a doll cake pan that you can get at party craft or cake store. A box of cake mix any brand and two things of frosting any brand. I dye all my frosting because its cheaper than buying a bunch of different colors but if you want to save time you can use colored frosting.

You will also need a fairy Barbie. Most people buy a cheap doll because they remove the legs; I do not because it’s disappointing to the child. You will need to remove any clothing the doll is wearing on her bottom half and her wings. Once you bake the cake you wait for it to cool all the way through then you stick the Barbie through the middle. Do not do this while the cake is hot or it will warp the dolls legs. Once the Barbie is in you decorate the way you like it in the colors you like.

I bought a Barbie with the clothes painted on so I do not have to frost the top half. I’m not good at flowers so I bought some silk ones from the craft store and ribbon but you can make some with frosting if you know how.

For this doll fairy cake I made a basic round for the base and for the skirt baked two smaller cakes in metal bowls. I carved the skirt into the exact shape that I wanted and removed the doll’s legs before placing her at the top.

The base cake was decorated with butter cream. The doll’s outfit was made of fondant (including the bodice).

I made her wings out of royal icing by piping them onto baking paper leaving them overnight to harden and then joining the wings together before attaching to the body.

Such fairy cakes are time consuming to make but definitely loads of fun!

I copied this cake from the fairy cakes on this website but the bowl I had to make the skirt with was not quite deep enough so I made a heart shaped base to put it on. I made it ahead of time and put it in the freezer. I find it is actually easier to ice the cake when it has been in the fridge or freezer first.

I then put a crumb layer of icing first and put it back in the fridge for few minutes before icing with the colors I wanted. I haven’t learned how to make flowers yet so I bought them at the local bulk food store.

The cake is composed of two stacked layers. A cake topper was made with a paper fairy as the focal point. A pre-made butterfly was added for drama. Surrounding the fairy cakes are berries and buds made from gum paste and gold berries from the craft store. They are all anchored in a fondant and pearl covered Styrofoam base. At the base of the top layer is a border of colored fondant cut using a gum paste cutter.

I bought this little ceramic fairy and wanted to put it on fairy cakes. This cake is a rainbow butter cake (separated into small bowls and colored, then poured it into the cake tin a bit at a time). I filled the cake with butter cream filling then covered the cake with butter cream and fondant. Royal icing piped border. Flowers on top were made from fondant also. The cake was dusted with silver luster dust.

For our little girl’s first birthday I wanted to do something very girly and sweet. I decided to have a fairy party for our little baby princess. I started by finding a precious little figurine from a line called “Kitchen Fairies”. This particular one was perfect for a first birthday!

I then designed the fairy cakes to match the fairy topper. I baked the cake in a small batter bowl and trimmed it down to a smaller size while cutting it horizontally to make two layers. I then used royal icing to make the roses – my first attempt! I gave the cake a rough icing with pink swirls around the top and sides for the elegant look.

For the guests I wanted the perfect fairy cakes or cupcakes. I ended up icing chocolate cupcakes with pink icing and topping with swirled white butter cream icing. I topped it all off with a red hot candy. The taste was perfect and it was by far the best cupcakes we had ever tasted!! As you can see from her pictures our little fairy was more than enchanted with her first fairy birthday cake.

Fairy cake by Nanthini A., Auckland

This is one of those unique fairy cakes; all the Pixies are sitting on a teapot. Teapot: 3 layers of cake on top of each other and cut the shape of slightly more than half round/ball. Pixies: in the order of legs, body, head then hat. Make them sit directly on cakes. Don’t do it separately and then try to make them sit.

Floors: Just painted. It looks like there are so many details in it, but when you start making you won’t realize how difficult it is. I enjoyed making this. This was a special 1st birthday cake for my lovely nephew Dhilan.