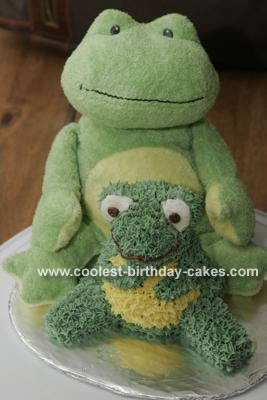 For our baby girl’s first birthday we wanted to make a cake that she would be excited to see. She is in love with her stuffed froggy so on a whim we did a Google search for a frog cake and found this site! We were inspired by the frog on the lily pad cake that is featured here.

The cake was made using the Wilton mini bear stand up cake pan. We made sure to grease the pan really well with shortening and then flour just like the directions that come with the pan instruct. We used vanilla cake mix and added about a tablespoon of vanilla pudding mix. The cake popped right out. After the cake cooled, we put it in the freezer to help ensure it’s firmness when we started the icing application.

We used the combo kit that you can get for the #16 star tip and generic vanilla icing. We put the icing in the fridge for a few a bit once it was in the piping bag so it would come out nice and crisp looking. We used food coloring to get our green and yellow and chocolate icing to get the brown for the eyes and mouth.

First, we used the plain tip and to outline the areas of the bear that would not be green. The eyes were made using what would have been the bear’s ears. The belly was outlined and the arms to ensure a clean line around them.

Then as an after thought we cut the legs out of leftover cake and placed them up against the bear. We filled in the gaps with icing and covered them with green stars.

The frog was a huge hit!