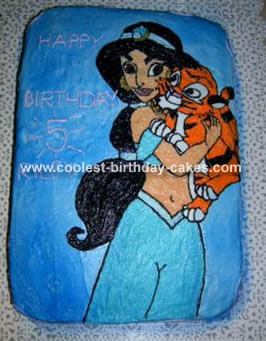 I am proud of this Jasmine cake because I can not draw on paper. Give me a piping bag and apparently I can draw.

Anyhow I made two 9×13 inch cakes because my daughter wanted chocolate cake and vanilla but not mixed together. I tried a new icing recipe which was extremely difficult to use it’s called the Wilton’s extra special, icing it tastes amazing though.

I put the base icing on the cake and then piped the outlines then tried to match the colors of Jasmine’s skin and clothing as perfect as possible. Her skin tone was made by mixing the Dora skin tone and some brown. Her outfit was made with teal and the light blue I made by mixing a really tiny bit of the teal with my white icing.

I chose not to have a border despite my imperfect edges because I thought it would take away from the art work. I did some monogramming on the side instead.

Keep in mind I made this cake with two three year old boys and my five year old daughter running around me all day. Half way through my air condition blew a fuse and went out. It took 12 hours to make and by the end I wanted to cry. It turned out beautifully and everyone gasped when I brought it to the table.