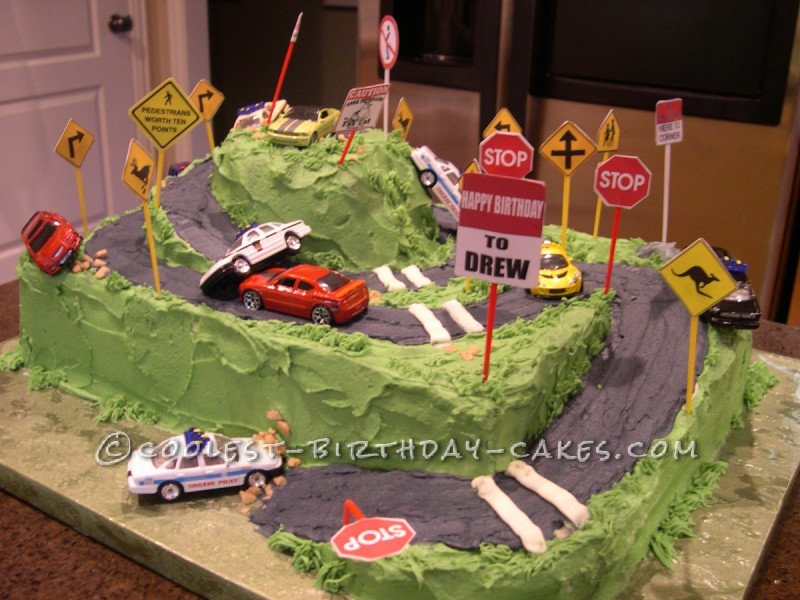 I made this learner’s permit birthday cake for my grandson who was all too quickly approaching the age of getting his driver’s learner’s permit. He wanted his birthday cake to reflect the milestone and to have something to do with cars. So I decided to make a cake that condensed plenty of country road in a spiral up and around a mountain. I purchased a bunch of toy cars and let him have some fun by placing them on the mountain.

He got a little crazy with it which worried his mother immensely about his upcoming milestone. Since he was having so much fun pushing the ridiculous limits, I took his cue and got ridiculous with the road signage. I downloaded random road-sign images and printed them out, then glued them both front and back using stir-straws as signposts. How can you have anything but road-rage and chaos with such a collection of arbitrary and conflicting signs?

The actual cake was easy, I just used his favorite flavor of box mix, Funfetti, and added instant vanilla pudding to give it a dense texture and make it easier to stack. The frosting is simple buttercream with various cake decorating food colorings using a spatula to smooth it on. I wasn’t aiming to get it real smooth because, after all, this is a mountain. I followed up with a couple different decorating bags with various tips to simulate grass in some areas along the base of the cake, along the road, and at the base of the sign-posts, as well as to make the straight lines crossing the road for cross-walks. God help the poor soul brave enough to attempt the crossing.

Heath candy chunks were used for rocks that were coaxed out of the mountain by the front grill of a vehicle at the crash-sites. The whole scene was built on a cake-board made from MDF and covered with foil.

I’m happy to say that he has since become a driver and that this cake in no way foretold his level of skill as a driver or his ability to decipher the meaning of a given sign while behind the wheel.