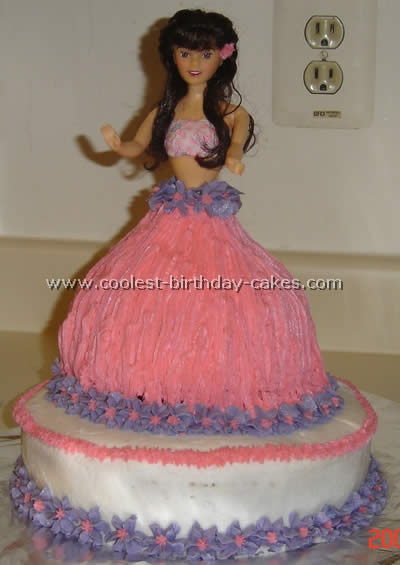 It’s my daughter second birthday. Since it’s not summer I got this idea of bringing summer into fall. I looked at a luau party idea on this website and got the idea for this cake. It’s just a circle cake, at the bottom its one box cake mix. I put almonds and chocolate chunks in it. I used the Pyrex bowl to make the skirt part and its also one box of cake mix.

I bought the Wiltons doll. Just iced the cake the way you want to. The tips I used is #2D for the flowers then #16 for the grass skirts. I found some fabric then I just cut it about 1″ to use for the bra. I think that’s it.

This birthday cake was made for my granddaughter’s third birthday. She had a Luau party idea so I thought of this cake. I used a boxed white cake mix and a regular 10″ cake pan for the bottom layer and the Betty Crocker Bake n Shape pan for the hula skirt shape. Barbie was wrapped in plastic wrap and inserted into the cake.

The icing is a Wilton snow-white icing. The “Happy Birthday Lauren” was written with royal icing and allowed to harden on waxed paper. Once it dried it can be placed standing up on the icing. It breaks easily so be careful.

(Tip: I used a Hawaiian font from the computer, placed wax paper over it and traced it out. You can also pipe little tabs beneath each letter to help hold the letter above the icing when placed on the cake.)

The flowers on the cake were made from rolled fondant tinted in the colors of choice. They were either hand shaped or shaped by using a miniature cutter in the shape of a flower. The edges of the petals were ‘rolled’ using the sculpting tool (tiny ball tip) on a thin foam pad (both are Wilton products from Michael’s) and allowed to dry overnight. I then painted in some details using lemon extract and a tiny paintbrush.

The leaves were made with a leaf mold. This looks like it was hard but it was just as easy as playing with Play-doh and to me much easier than making flowers with icing! It’s a lot quicker too.

The skirt was iced using the Wilton grass tip. Icing was used to hold the flowers onto the skirt and around the bottom of the cake.

This cake was a great success and definitely suited the Luau party idea!

For this cake I used the Wilton wonder mold for the hula skirt. Frosted it green then piped green “grass” with the round flat tip with multiple holes. (I borrowed the tip so I don’t know the number). It was one she had used to create monster hair for another cake if that helps! The top is a Wiltons Barbie that I piped a little bikini top on. I finished it off with little pink flowers around her waist and on the skirt. It was a huge hit!

I found this cake thanks to another Luau party idea I saw right here on this site.

We were moving to Hawaii and my daughter’s 7th birthday was just before the move so we had a Luau party idea for her birthday. My daughter loves Brats dolls so I purchased a Brats doll for the cake and she was able to have it as a toy afterwards!

What you will need: A glass batter bowl that can be used to bake (used for the dress), your favorite cake and frosting recipes. Bake your cake in the batter bowl (I used the P. Chef Batter bowl for this one). Let cake cool then place on the surface you intend to use to display the cake with the wider side down. Dig a small hole in the top of the cake to insert Barbie/Brats legs.

With green frosting frost the entire cake. Next, using a tip that creates a separated effect like grass, run it from the waist of the Barbie down to the bottom. Next, using a star tip, create a belt around the waist of the Barbie and place random flowers around the hula skirt. Don’t forget to add the finishing touch by using the same star tip to make a lei around her neck!

I used store bought cake mix for my luau party idea and followed the directions on the kit for baking. I used tubes of icing to make the bikini top. I used flower sprinkles to make the lei attaching them with the icing.

For the grass skirt I simply put an excessive amount of butter cream frosting on the cake and wisped a fork throughout it to make it look grassy. I didn’t have to be neat because the frosting that drips to the base just looks like it is part of the hula skirt after I ran the fork through it. I wrote “Aloha” in the tubed icing and added more sprinkles at the base of the cake plate.

My five year old daughter and her friends loved it! It was really fun to make.

My cousin Mary wanted a luau party for her 6th birthday. She had a kids’ party early in the day and a family party later. I made the hula girls using the Wilton mini-wonder pan and used a star tip to look like a grass skirt. She used them for the kids and displayed the sheet cake, then ate that later with the family.

I prepared this Hula girl cake in a batter bowl with 1 1/2 cake mixes according to package directions. I had a 1st birthday luau for my little girl and I got the idea to have a “hula Barbie cake”. I think it was really easy to use the Barbie doll that had a bikini on already but you could even do this with icing. My daughter loved the Barbie cake and even hugged and kissed it instead of the traditional cake smashing. I guess the hula girl was just too cute to smash!

For my daughter’s 4th birthday, which is in July, we decided to have a Hawaiian Luau party idea. She wanted a Barbie cake though, so I got the idea to make a hula girl cake from this website.

To make this Hawaiian Luau cake, we started by baking a 18″ round chocolate fudge cake using the Wilton Decorator Preferred 18″ half round pan. We then baked a Wilton Barbie Mold butter recipe vanilla cake for the hula skirt and placed it on top of the 18″. I purchased the Barbie Mold pan on EBay for $12.00 shipping included.

I allowed the Luau cake to cool overnight and the next day I began decorating. I used homemade butter cream icing and frosted the entire Hawaiian Luau cake white only going half way up the hula skirt. At that point I decided to go ahead and insert the Barbie into the Hula Girl cake. I purchased a brand new Barbie, choosing a darker complexion one that had an “island”-look to her.

I removed all her clothing except for the necklace she was wearing and put the hair up out of the way (once you are finished decorating the cake and the butter cream icing sets up, usually after a few hours, you can let the hair back down.) I washed her from the waist down in warm soapy water and dried her well. I just put her legs together and pushed her down into the Hula Girl cake stopping below her navel, because I wanted her skirt to be low on the hips like the way a real hula skirt is worn.

I used Wilton icing food color gel paste to color the icing and used a Wilton decorator bag and different types of tips to decorate the Hula Girl cake. I mixed up 3 different shades of green for dimension in the grass skirt and also for the leaves around the bottom and borders. I mixed hot pink and yellow food colors together to get the bright coral-like color for the flowers; it looked very tropical. I used a bright blue for the other flowers. I put a yellow dot in the centers of all the flowers. I also used the coral color to make a bikini top on the Barbie.

I put the #4 candle in to the Hula Girl cake and put leaves and flowers around it to “set it in place”. I used the bright blue to write “happy birthday Serenity” and finished by putting little tiny tropical-colored round candy sprinkles, which I bought at Walmart, all over the top.

The morning of the party I let the Barbie’s hair down and arranged it to look pretty. Everyone loved the Hawaiian Luau cake and my daughter was totally amazed. I was so proud of myself. I started out nervous and had no idea how to do this, but once I began the ideas just started flowing and this is my end result. It was very easy, however time consuming.

All together, the icing decorating took about 11 hours to complete. I just did it a little at a time and took breaks, as I needed them. When the icing in the decorating bag would get warm and get runny from being held in my hands too long I would just sit it in the fridge to firm up and go take a break.

One important tip – you have to make your own icing and make it a little stiff to get the bag tips to work properly – canned icing is the wrong consistency and will never work. Also keep your icings you are not currently using covered with a damp cloth or it will dry out and if it’s going to be a couple hours before you need a certain color icing, leave it covered in the fridge so it doesn’t get too soft. Then you can pull it out and re-whip it when you are ready for it.

This is a very cute and fun cake to make; great for a Hula Girl party or Luau party idea.

You can make the skirt of the Hawaiian Hula Girl by baking the cake in a Pyrex or oven-safe bowl that is small and deep. You can make this like a Barbie cake or with a bigger bowl and doll. Bake cake and let cool.

I found the flower candy confetti at Wal-Mart and it worked great to make a lei and to accent the Hawaiian Luau skirt. Use icing (you can tint white with food coloring) and ice bowl cake. Use fork in a bottom to top manner pressing lightly trying not to actually touch the cake and make the line marks for the grass skirt.

Insert doll without clothing into middle of top of the Hula Girl cake. Use whatever color icing you’d like and spoon it into a Ziploc bag, snipping off one corner slightly. Pipe on bikini top on doll.

Use flower candy confetti and place around the bottom of the Luau skirt and around the waist of the doll on the skirt. Use the left over icing in Ziploc bag to “glue” the flowers as a lei around the dolls neck. Add one flower to her hair too!

A luau party idea was the theme and here is the Hula Girl cake. The top tier was chocolate with a Hawaiian girl purchased at a local party store. The bottom layer was almond flavored with lemon filling. Candy flowers decorate the cake and cupcakes. Flowers were made with wilton candy melts.