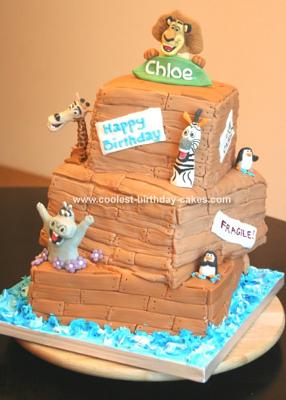 My four year old girl had been watching repeatedly the Madagascar DVD a few weeks before her birthday and so no doubt she said she wanted a Madagascar cake! I had the thought of the character animals popping up from the cargo boxes from seeing the movie posters on the web.

The square cakes were covered with “timber” fondant strips – one by one. I had used a piece of plastic which had lined grooves in it and pressed it against the timber strips to give it that texture. Then I place four dots at both ends to make it look like nail indents. As for the characters themselves (apart from the penguins) I had printed out pictures of the characters and built up the face starting from the base of the face and adding on the features layer by layer. My guests couldn’t believe I made them and many of them probably didn’t think they were edible and thought were toys until the kids were eating the characters!

I was impressed myself with how well the characters’ faces turned out! This hobby I picked up two years ago keeps me busy, now as I have many interested mummies calling me up!