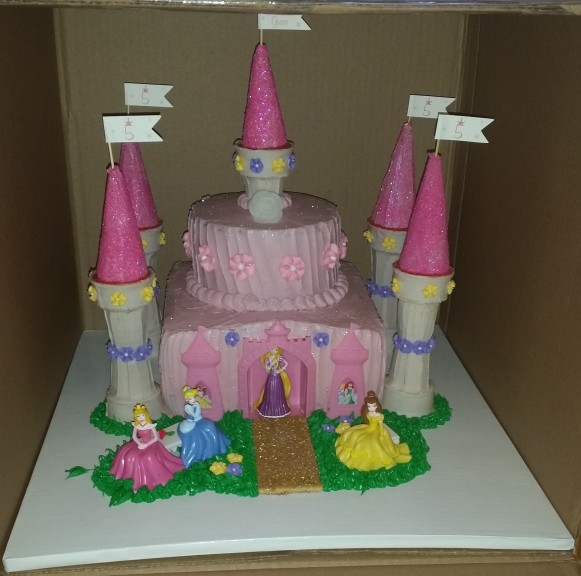 My daughter’s 5th birthday was coming up and she wanted a princess theme party with the works! I searched around endlessly for a Princess castle cake and the prices were ridiculous, so I took on the challenge to make my first castle cake.

I proceeded to start my online search for DYI princess castle cakes and came across so many great ideas. Even with the party being about 5 months away, I began to buy things here and there that I felt would accent this cake to my little princess’s liking.

The day before the “Coronation”, I start building the pillars, which were two types of ice cream cones stacked together and iced with frosting. The top cones were iced, then rolled in hot pink edible glitter,and set to dry. Later on I added royal icing flowers to decorate and to also hide the unsightly areas on the cones.

The cake from start to finish took nearly 11 hours to make, but turned out to be so worth it. I also needed an 18x18x16 box that I got from Home Depot to put this cake in because it seemed no cake box existed for a cake this size, LOL!

I had a blast making it.  It was so beautiful that I literally had to beg someone to cut into it because even I didn’t want to!