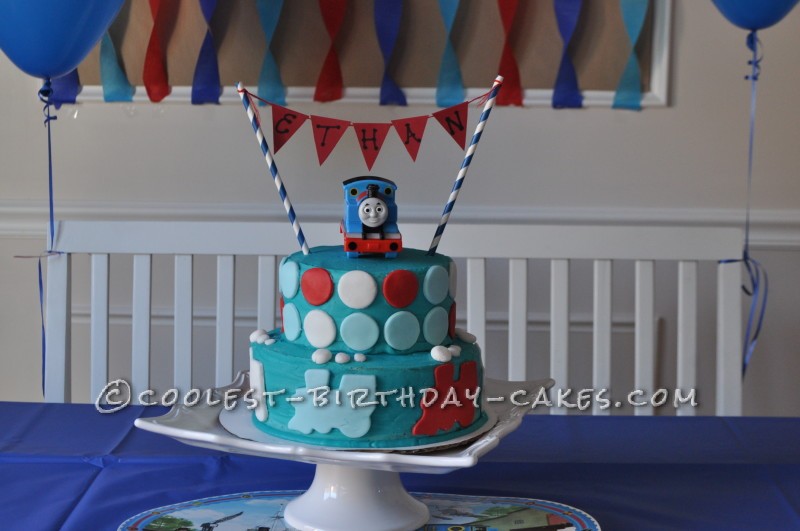 For my son’s 4th birthday last year, he decided he wanted to invite friends… for the first time! So I knew I couldn’t make any cake, it had to be KID-worthy! He loved Thomas and Friends, so that was the theme of his party. His only request was, “PLEASE, don’t but any nasty blueberries in my cake.” Easy enough. So we decided on a homemade funfetti  cake.

From there, I decided that the colors where going to be bright blue, sky blue, red and white… very clean and modern, yet still fun for a 4 year old. There was going to be 24 people at this party, including adults. So I knew a bigger cake was necessary… because what kid, or adult for that matter, is going to turn down cake?? A two tier cake was the solution to feed all the guests (because sheet cakes are B.O.R.I.N.G).

To ease my fear of fondant, I started looking online for inspiration (PINspiration). People are always claiming that covering a cake in fondant is super easy… I’ve never had such luck. I wanted to look of fondant, without the trouble.  So after much research, I found the PERFECT way to make the frosting appear very smooth.

Feeling determined, I whipped up some buttercream frosting and tinted it a bright blue. I frosted on a crumb coat, and froze the cake for 15 minutes. Once it had hardened, I but to final coat of buttercream on the cake, using an offset spatula. Then the most important part… I smoothed the frosting out with a damp paper towel! It was so incredibly easy and efficient.

After the cake was frosted, it was decoration time! I placed it in the refrigerator to set the frosting for easy decorating. For the train shapes and circles, I used colored fondant. I had white, and dyed it myself with basic food coloring… my hands were purple by the end of my endeavor. Using the rim of a shot glass, I created the circles and the train shapes were made with a cookie cutter. To adhere the shapes, I used a little water on that back to stick it on the frosting.

That was pretty much it! I also made the banner for the top. Just some cardstock cut into triangles, two paper straws and some string gave the cake a nice finishing touch. 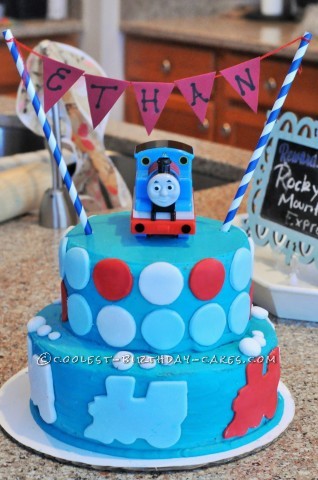