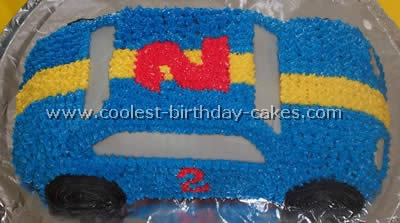 I decided to do a car theme for my son Nathan’s second birthday since he just “loves” anything to do with cars. I searched this site for Nascar cakes and this is what I made. I used the Wilton 3-D Cruiser pan and I didn’t get quite enough batter in the pan so I didn’t get the bumpers, but after decorating it the car looked pretty cool. Since it was for his birthday I decided to decorate it like a racing car with a yellow racing stripe and the car number as “2” since that’s how old he was turning.

Along with the cake I decided to make some street sign cupcakes so I made the stop yield and also speed limit signs with those sporting the Speed Limit of “2” also. They were a big hit and easy to make.

I took grey icing and filled in the areas for the windows and used a little for the headlights. Then I outlined where the racing strips and numbers were to be placed and filled everything in using a star tip. I thought it would be hours to complete but only took about an hour and a half once I got started.