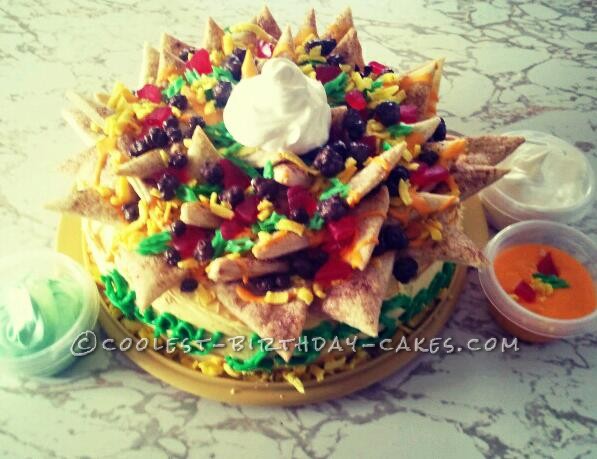 Nacho Cake (like saying “Not your cake”), It’s Sean’s!

We like to have fun and birthdays give us more of an opportunity.  Sean LOVES nachos, so I decided to make him a Nacho birthday cake, that’s what he loves.

I made the “chips” first, from store bought pie crust, using a pizza cutter to shape the chips. I also used cinnamon and sugar for added effect. They cooled while I made the cake from one cake box.  One tub of vanilla frosting was used.  I added yellow and orange food coloring to it first frost the cake and took the left over and put more orange food coloring to make it darker and microwaved it and used it as the melted nacho cheese poured on the nachos and also in the condiment holder.

I shredded some yellow fondant for the cheddar cheese (we use both cheeses when we eat nachos, so it made sense to do both). Green licorice was used for the peppers.  In searching for tomatoes, I decided on the Swedish Fish candy and cut them up. The meat is made from Buncha Crunch(bunches of Nestle Crunch Bar).  I had to finish it off with some sour cream, of course.  For that, I used whipped cream.  I added some green to the whipped cream to make some guacamole.

I had so much fun putting this cake together!  Sean was so happily surprised, I think he was confused at first if it was dinner or dessert. The cake, even with all it’s toppings, was one of the best tasting cakes I have made, which made it even more enjoyable. 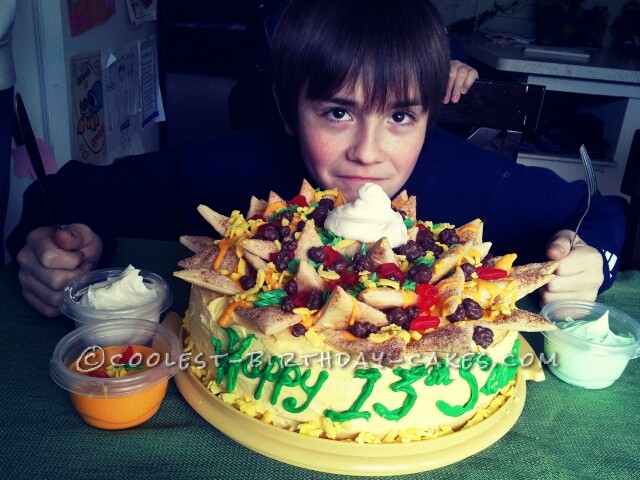 Cool Nacho Cake for an Anniversary

Awesome Homemade Chips and Dip Cake for a Potluck