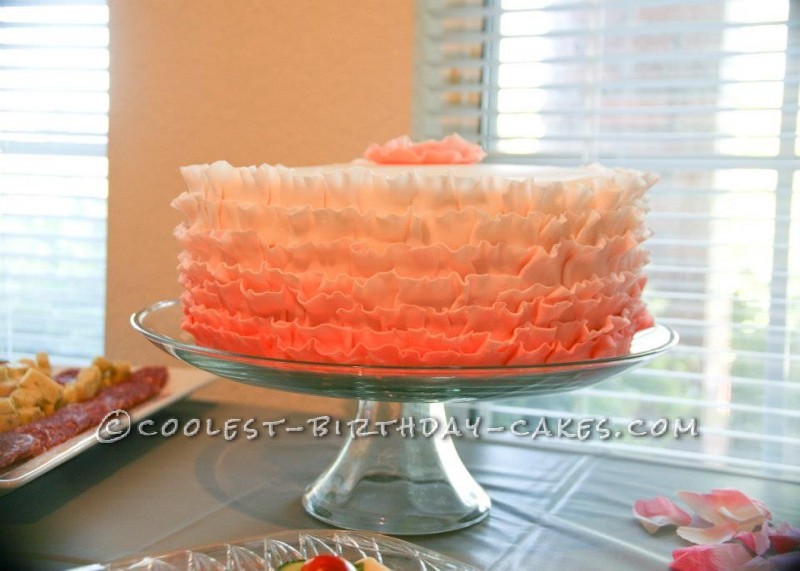 Here is my version of the ombre ruffle cake. I had a blast making this cake and the reaction of the expected mother was even better! For the most part, this cake was pretty straight forward.

I started by making 2 inch white cakes. Once they had cooled, I cut them in half, making four thin cakes. I then made a homemade Mascarpone cream cheese filling (which is 1 part mascarpone cheese, 1 part cream cheese, powdered sugar and milk) and filled each layer with the filling and freshly sliced strawberries. Once the cakes were filled and stacked, I covered the entire cake in butter cream frosting. I then covered the cake in white fondant.

Once the cake was covered and smoothed, I took a large quantity of fondant and colored three shades of pink, starting with hot pink and blending to an almost white-pink color. I cut the fondant into strips of about 1 inch thick and about 6 inch long. Then to create the ruffles, I laid a tooth pick about half way through the strip of fondant and wiggled back and forth, which pulls on the fondant creating the ruffle look. Once all the colors were ruffled, I used vanilla to glue the ruffles to the cake. Starting at the top with the lightest color, I did two layers of each color until I reached the bottom of the cake. The flower was made with the same concept. I used round cutters and ruffled the edges.