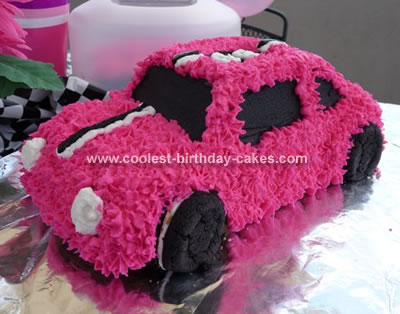 I was helping host a baby shower for a friend at work who loves Nascar and had to come up with a cool idea for a race car theme for a baby GIRL! I came to this website and found lots of great ideas and went to work.

I purchased the Wilton 3D race car cake pan and followed the enclosed directions closely and the cake came out great. It took 2 cake box mixes so I used the extra cake batter and made 12 cupcakes too. After baking and cooling I carved out the tires on the cake and used the new “cake-like” Oreos for more realistic looking tires.

I used the buttercream frosting recipe included with the cake pan and one batch (3 cups divided by colors) was plenty to frost this cake with. It was a lot easier to work with than the frosting you buy at the store.

I also bought the recommended Wilton food coloring which did indeed produce the most bright, vivid colors it promised but did taint the taste of the frosting a little. I frosted the windows first with black and smoothed them with a metal spatula, then put a thin coat of pink frosting over the majority of the car. I used my Pampered Chef icing kit, which to me is easier than using one of those “bag” type kits.

I then filled the frosting tube with pink and used the star tip to decorate the car and give it the “fluffy” look. I piped in the headlights, “88” on the top, and stripes along the front,top, and back of the car in white. I placed a couple of hot pink gerber daisies on the cake board which really gave it that nice girly touch.

This was the first cake I’ve ever done that was this complicated and it really was easier than I expected and turned out absolutely adorable! I got a lot of nice compliments and it worked perfect for the occasion. I plan to use this again for my little boy’s birthday.