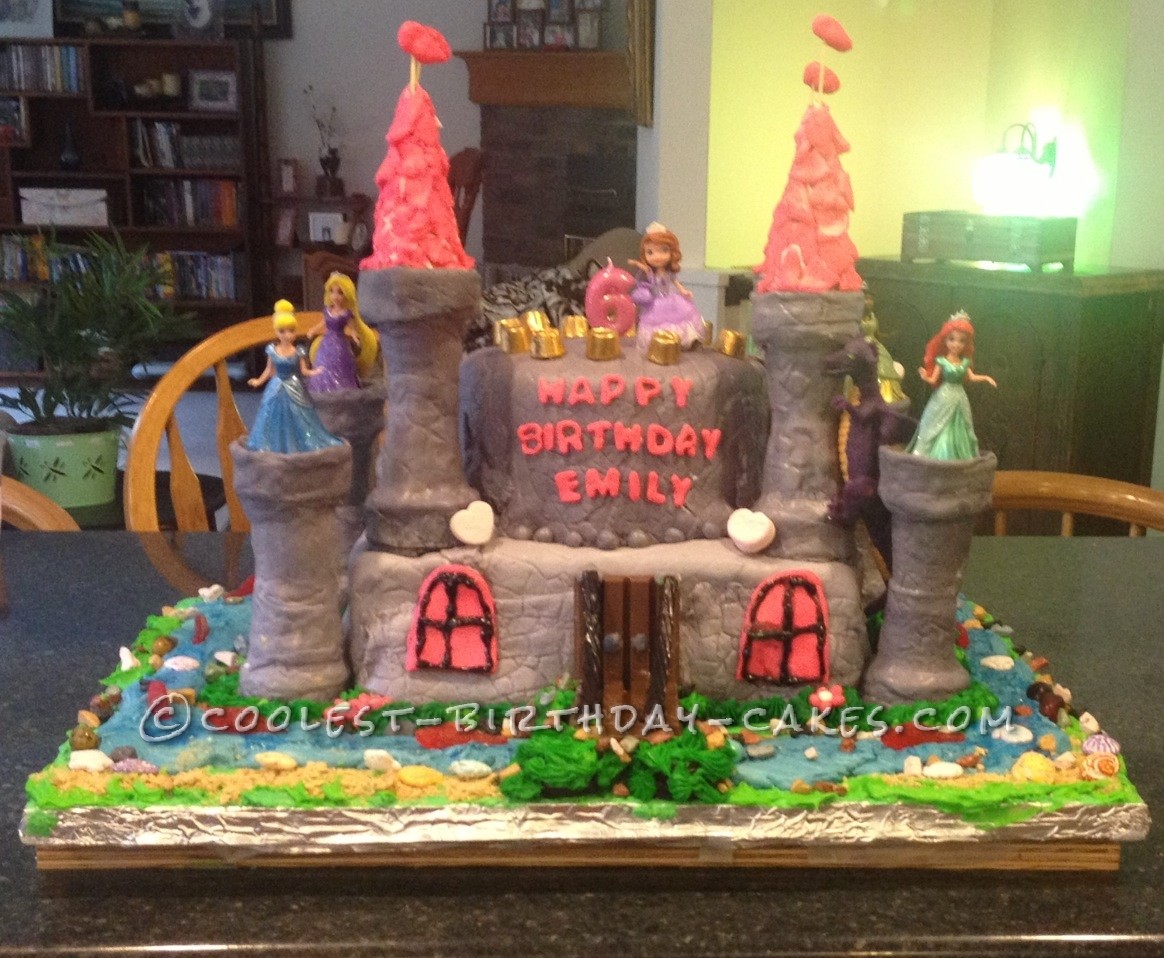 I started out on this castle cake with only having made three previous cakes and only one of them fondant.  So why might you ask did I attempt such an  undertaking?  Several answers come to mind with the first one being, why not? It’s a cake.  Even if the decorating goes horribly wrong it is still tasty!! Another, compelling reason for my undertaking is the person for whom the cake was being created wanted it really badly and had all the confidence in the world that Mommy would come through for her.

My daughter drew a picture of her cake that she wanted Mommy to make and she  was so proud of her design and so excited for Mommy to create it that I just had to.  This is the same  little girl who in her words would rather go visit ” Carlo’s Bakery” than go to Disneyland so I also knew my audience was tough so I better do my best!  Thirdly, my beloved grandma made special cakes for us. I remember them being magical and I particularly remember a castle cake and being amazed.  I wanted nothing more than to pass that magic on to my daughter.

To start off I sketched the cake again and ran ideas by my daughter.  I also Googled images of castle cakes and perused coolestbirthdaycakes.com for ideas. I came up with a plan based on many different ideas.

So I decided:
It would be made with homemade marshmallow fondant, box cake, cereal treats, homemade icing, ice cream cones, cookies and Kit Kat for the moat and lots of candy rocks!
I also decided to include toy princesses and a toy dragon. I think its great fun for the birthday child to be able to play with their cake when its all eaten!

After deciding on the basics I devised a plan:
Then I devised a Three day schedule: Three days before the party I  baked the cake which was two layers done in a half sheet pan it took 5 boxes of cake mix for the first rectangular layer and two boxes for the second made out of 8″ rounds.

Two days before the party I made the fondant by melting and combining bags of marshmallows, confectioners sugar, water and color gel.  I made grey for the castle and pink for the turrets. And left a batch white to be colored later as needed or kneaded. I know bad pun.

One day before the party I started bright and early coffee in hand and set out to finish the cake.  First, I dirty iced stacked and covered the layers in fondant as well as covering the board with piped grass and fondant flowers. FYI I do not own any fondant cutting tools besides letters so the flowers I made up by trial and error but they seem to work nicely my friend thought I bought them!

After covering the main part of the cake it was time to tackle the towers and that was difficult!! First off cereal treats and fondant are trickier to work with than it looks on Cake Boss!  I quickly abandoned that plan and went with two cake cones stuck together and covered in fondant.  I however had not made enough grey fondant and let me tell you it is very difficult at least for me to match the color of already made grey and kneading black gel into the white fondant but it all seemed to work out after lots of working in of the color gel.  After the towers were done I made blue frosting for the most and used Oreos, Kit Kats and licorice to make the drawbridge and castle door.

Then, I added details like the princess toys, A sneaky dragon, gummy fish for the moat and I learned that writing icing does not stick well to fondant so I scraped off the runny icing and tried again to make windows this time using more fondant.  The best part for me was hand making the fondant flowers and adding all of the details to the cake.  Including the candy rocks!
At this point my back was in spasm and I was exhausted.  I was all done,  my little birthday girl came skipping in the room ( a friend watched my kiddos all day for me while I did this… babysitting was a necessary ingredient) and she gasped then she said she never wanted to stop looking at her cake and that she was proud of me.  With a melted heart I went to bed and slept well!

The day of the party everybody thoroughly enjoyed the looking at and eating the cake!   Someone even commented, “Holy Princess Castle Cake Batman!” Now, I have four months until my youngest daughter’s birthday to recover! 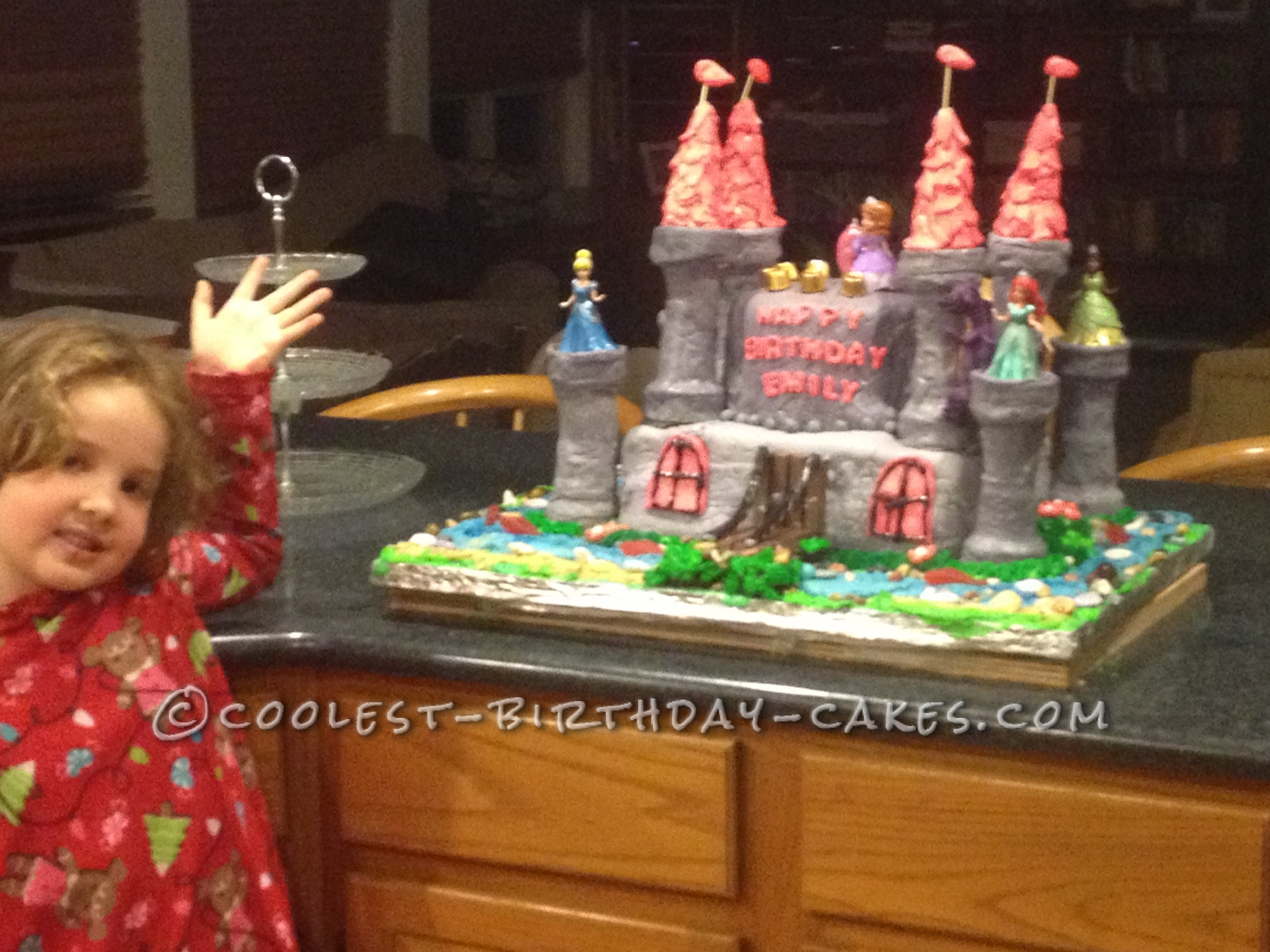