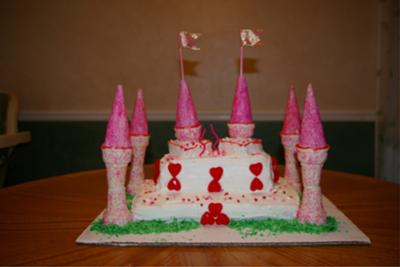 After I decided to have a princess party for my 2 yr old I took several ideas from other castle cakes on this site.

For the basic castle I took a 13″ x 9″ for the bottom layer and a loaf pan cake for the middle and 2 4″ heart cakes for the top. Since my little one’s birthday is just before Valentine’s day we always incorporate hearts into her parties. I decided to keep the decorations simple so I iced the whole thing with a homemade vanilla buttercream icing. I put some heart sprinkles on top of the layers and used gummi heart candies for the doors and windows. I also piped some pink glitter around the top heart layers for some extra color. For grass I just sprinkled some coconut tinted with green food coloring around the bottom.

For the turrets I used two cake ice cream cones topped with one sugar cone. I first “painted” each cone with melted vanilla candy then sprinkeled them with pink sugar. For the turret (sugar cone) I added some clear sugar and then spary painted the cone (after cooling) with a food coloring spray to make it a little brighter. I also used this spray to spray the bamboo skewer banner poles and gold ribbon banners. To assemble the towers I glued the two cake cones together bottom to bottom with the melted candy (after each one had hardened. Then placed the sugar cone on top after piping some icing into each cone top. Then I piped some glittery pink around each tower to help secure. The top two cones with the banners only used one cake cone each with the bottom part of the cup cut off. The sugar cone turrets also has a small portion cut off the top to allow the skewer to fit through.

For a simple version of a castle cake I thought this one turned out very cute and the kids loved it!