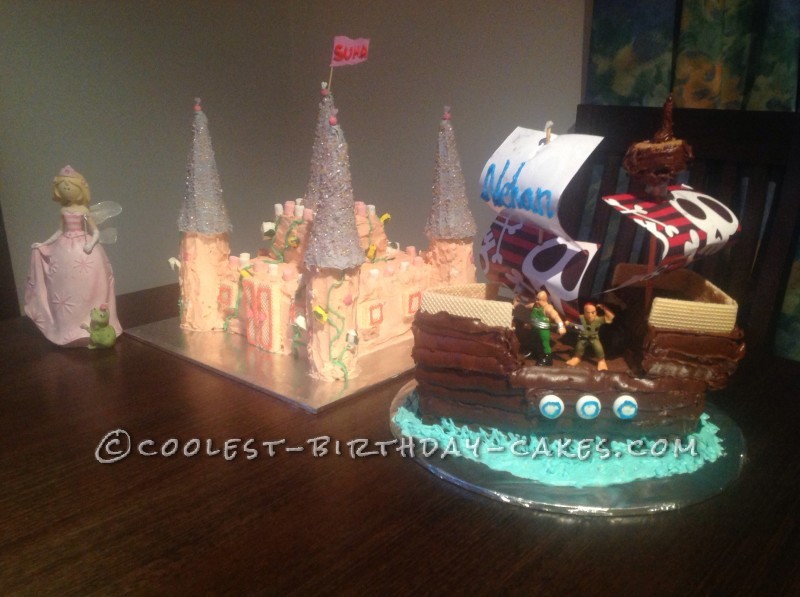 Every year it’s a difficult task to find coordinating themes for my boy girl twins. This year for their 6th birthday they selected the princess and pirates theme. Both of them were very sure what cakes they wanted. My daughter wanted a pretty pink castle and my son wanted a mighty pirate ship. Hmm.. The castle I had done for her 3rd birthday so I had a vision as to how I will go about it but the pirate cake gave me the shivers (shiver me timbers!!). Here’s how I made them

For the turrets I staked the Oreo gold cookies using the cream cheese frosting and placed them one four sides of the castle. I used then covered the whole cake in pale pink butter cream icing. I covered 5 ice cream cones with violet butter cream icing and sprinkled pink and yellow sugar sprinkles. Placed 4 of them on the turrets and one on the center square. I used vanilla wafers to make doors and windows and piping gel to decorate them. I piped butter cream vines and placed fondant flowers bought from the super market. I finished decorating by placing the marshmallows.

I baked a chocolate cake in a loaf pan. I cut the edges in a ‘V’ shape to make it look like a ship. Then I used the extra cake from the castle cake to add the second  layer. The gallery is projecting out so I broke a skewer in two halves and poked in the cake to hold it from toppling. Also I added sails on the chopstick and inserted in middle for further support. I also used some extra cake piece to make the thing where the pirate climb up to view using the telescope.

To prevent it from sliding down the chopstick I put sticky tape underneath the cake on the chopstick. I used mentors candy decorated with blue piping gel to make the life savers and wafers to make the fence. I used blue butter cream icing for the water effect. The cake is iced using chocolate ganache and to get the wood effect I used a similar icing tip to the wilton icing tip 124. Mine is from china. 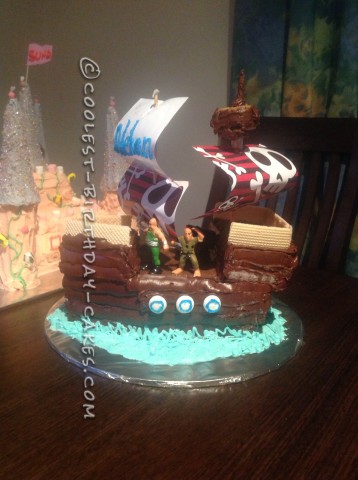