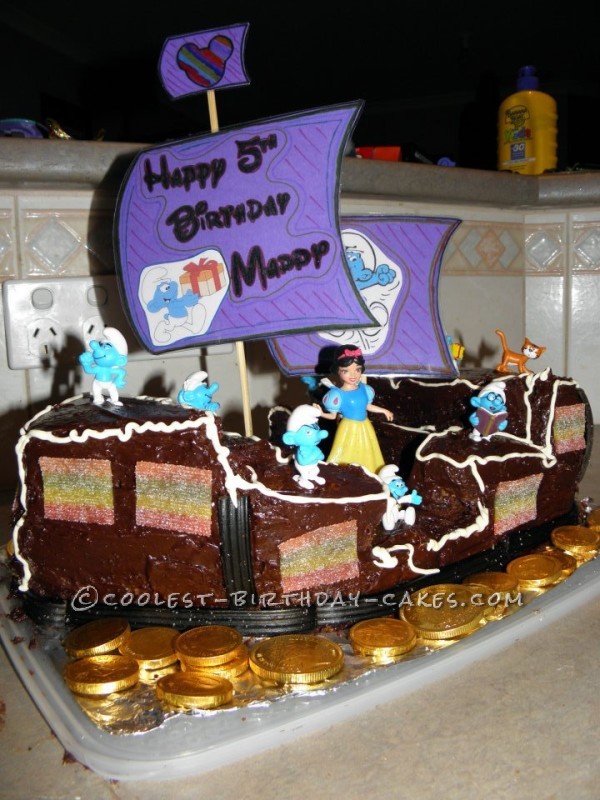 I think my big kid likes to challenge me. She certainly tried hard with this one. She wanted a pirates ship cake, which didn’t seem too difficult. I found a picture in one of my cake books and was all set. Then she decided that a simple pirate ship was not enough. She wanted her princess side shown too.

Snow White is her absolute favourite princess. I am yet to figure out why, maybe because she eats apples. Anyway Snow White needed to be on the pirate ship… Why you may ask. I think it had something to do with a twisted fairy tale I wrote. Snow White ran away from the Evil Queen and hitched a ride with Captain Hook. However Captain Hook was not invited to appear on the cake. In my girl’s over imaginative head Snow White probably overtook Captain Hook and stole the ship To continue the seven dwarves were not getting a look in either. No it simply had to be seven smurfs. Again you’d have to ask her. However I managed to find one Snow White figure and seven smurfs to go on the cake.

I think I started making the cake after work and then spent most of the night trying to make it into the pirate ship. Which is harder than it looks. Of course I managed to somehow make the perfect cake, for once. Well actually it wasn’t a blessing because the cake was soft and fluffy. This of course made it more difficult to keep in the pirate ship shape. Toothpicks were required. Then came the icing. Which was at least chocolate over chocolate. So much easier as it doesn’t matter if the cake crumbles a bit into the icing. The cake was finally done and holding together. So I added Snow White and her funny blue friends. Then I made the sails of the ship. They were added and amazingly it all worked. My big kid was so excited to see her cake. Pretty sure she thought it wouldn’t happen. Of course now she knows I can do that she keeps asking for more and more difficult cakes. I will always try though because I love seeing their smiles and the looks of amazement on their faces. I must admit I was pretty happy with Snow White and the seven smurfs on a pirate ship, What was even better was that it tasted great too!