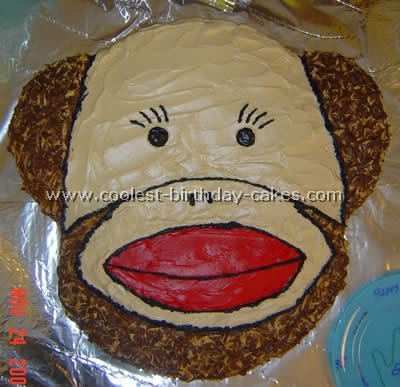 I used store bought cake mixes in white and Devil’s food. Each head was made in a 16″ large round cake pan and used two cake mixes. After the cakes were out of the pan we just cut off some of the cake to make the head not so round. The ears were cut from two 9″ round cake pans. We used store bought white icing and icing gel to get the colors for the icing. A large template was drawn for the face and then cut into pieces and laid above the cake for placement of the lips, eyes etc.

These two cakes used a total of five cake mixes. Each cake head used two cake mixes and the ears used one 9″ round (1/2 cake mix). My sister has made cakes as large as 12 cake mixes, the cakes are as big as the table!