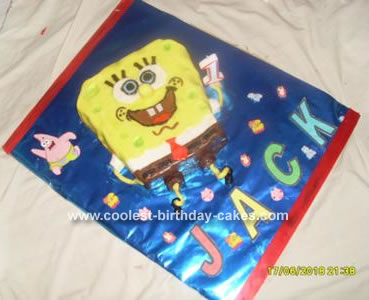 We made this cake for my nephew’s first birthday, we were slightly worried at first but it turned out to be very easy.

What we used – we made a rectangle shaped sponge cake with jam and buttercream, cut the bottom sides off the cake and then stuck the bits we cut off onto the top of the cake to give that SPONGE BOB SHAPE. We went on the internet and got a A4 sized Spongebob picture to use for reference

We then went to out local supermarket and bought some ready to roll icing in the following colors: yellow, brown, white, red and black.

We covered him with his yellow first and used the bottom on the rolling pin to dent in the sponge holes. We then used green food colouring to dab in the holes.

We then made his pants shirt and tie, and then made his arms,legs and shoes also out the icing and just stuck them on with sugar water.

His eyes and nose and also ready to roll icing and the other details were made with icing pipe.

The Spongebob birthday cake turned out very good for our fist attempt. We are attempting to make a Patrick star cake to go along with it.