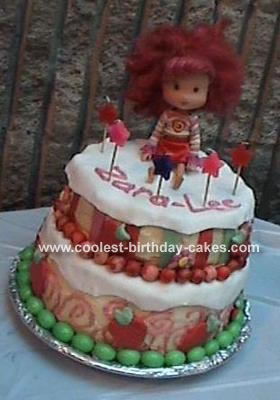 I made this Strawberry Shortcake for my daughter’s 5th birthday – she fell in love with this cake after seeing pictures on this site.

I kept the cake to two layers as her party wasn’t huge. The cake itself is a slightly heavy chocolate cake taken from the Australian Women’s Weekly Kid’s Party Cake book. The bottom layer is constructed from one full cake, plus another half, iced together with chocolate buttercream icing (homemade, because in New Zealand you don’t have much choice!) The top layer is slightly smaller and was made from a single layer.

I froze the cake before decorating and iced it straight out of the freezer, it is much easier to ice a frozen cake! It is iced in buttercream icing, with store-bought fondant icing for the layer on top of each cake. I used one small box of fondant for the whole cake incl. decorations, and had about a 1/4 of the block left over.

The strawberries, flowers and stripes I made from fondant that I tinted to the right colour, using Gel colouring for a true red. I made these the day before and left them to dry overnight so they were easier to stick on.

The swirls on the bottom layer were piped on using a small nozzle, and made from tinted buttercream.

The red balls around the top layer are Jaffas, although I did notice that they started to lose their colour and went a bit blotchy. The green balls are Snifters. (Not sure if Jaffas and Snifters are sold overseas, but there is sure to be a similar lolly/candy)

This cake was surprisingly easy to make, and we had lots of lovely comments.