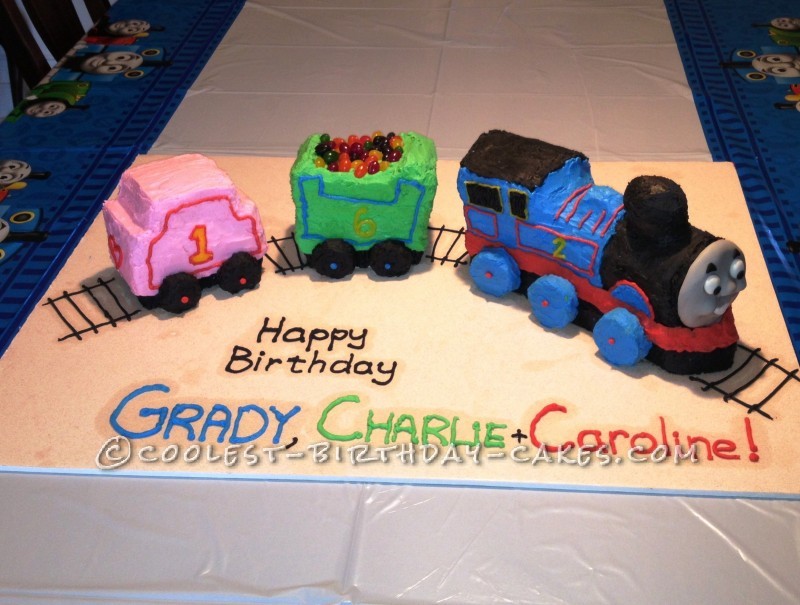 My son loves Thomas the Tank Engine, so I knew I had to make a Thomas cake for his second birthday. The cake turned into a full train when we decided to share the party with his two cousins – ages 1 and 6. As always happens with my cakes, my initial thought was “How … Read more 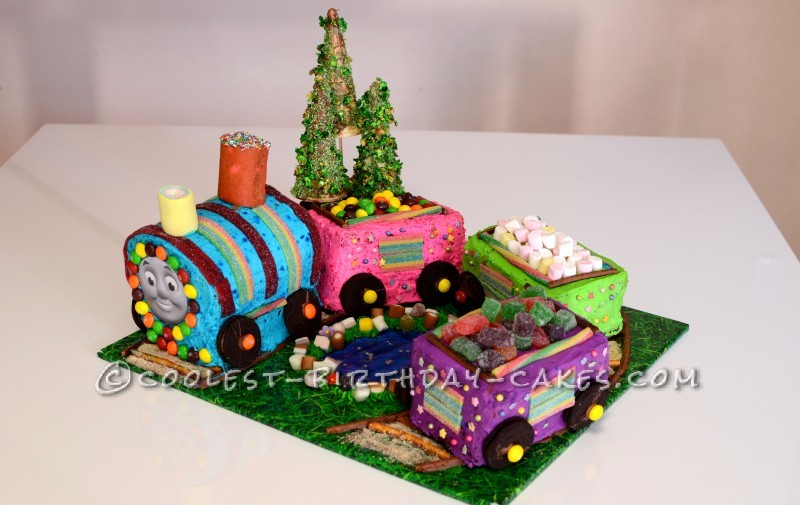 This Thomas train birthday cake was made for my nephew who turns 2 today, 8th July 2013. He is a big fan of Thomas and friends. I  used a Thomas face picture to bring that feeling. It is not edible though. The cake was a half chocolate and half vanilla one. The bottom layer being … Read more 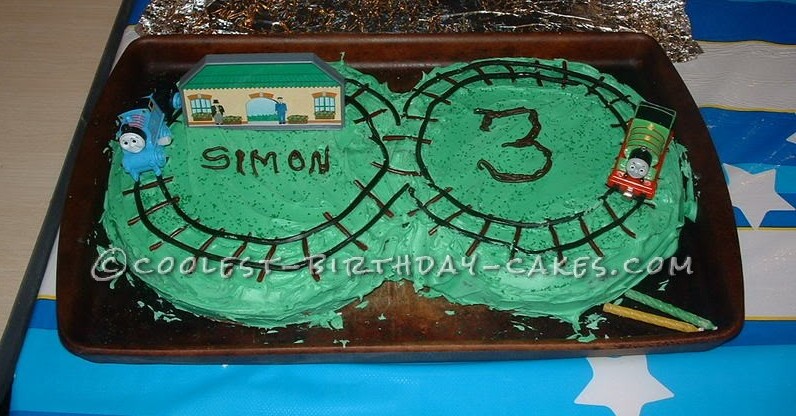 My son LOVES trains, and has since he was about 9 months old. I had made him the train cake from Wilton his 2nd birthday, but he wanted an entire train track this time. I made a simple cake in 2 round cake pans and cut a small piece of each so the would sit … Read more 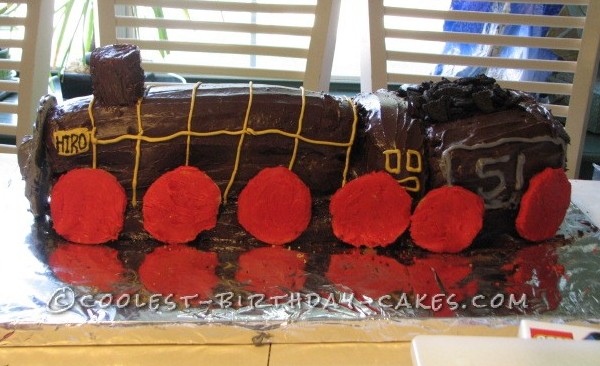 My daughter decided to have a Thomas the Train party for her 3rd birthday.  Her favorite train is the black engine, Hiro, so that’s what she wanted for her cake. I decided to go ahead and make a Thomas train cake, too, since the other kids might be disappointed if there was no Thomas. At … Read more 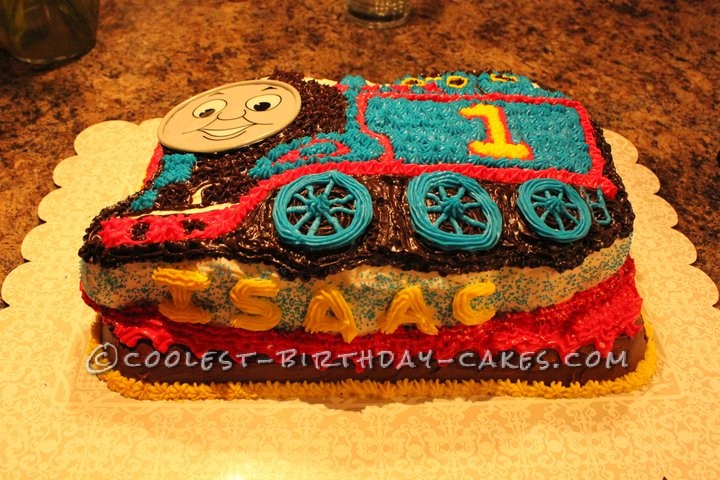 I have made several Thomas cakes in the past for my boys.  The hardest part is always the face!  When my 3 year old asked for ANOTHER Thomas cake, I cringed at the thought of making that face again.  And then it dawned on me that I could use an old toy as a cake … Read more 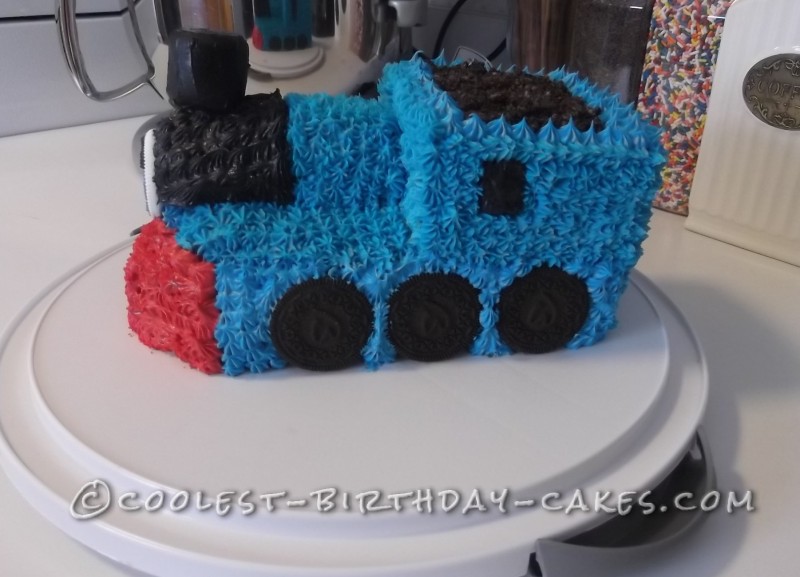 This is a pretty simple Thomas the Train birthday cake I made for my nephew’s second birthday. I showed a picture of the carved cake before I frosted it. I started with a 9×13 cake that I cut two 4×9 pieces for the front of the train and two squares about 4×4 to stack on the … Read more 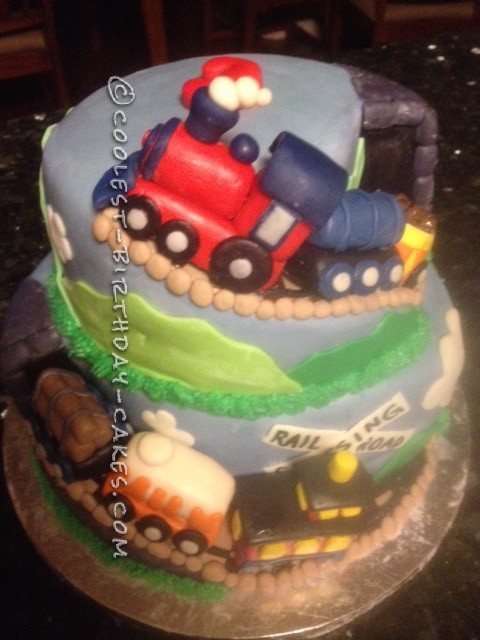 When I was in grade school all through high school, I could barely draw a straight line. The clay sculptures we made in art class always looked the same-like ugly ashtrays.  Then I decided I wanted to try my hand at decorating cakes. Suddenly the artsy side of me came out, and people started asking me … Read more 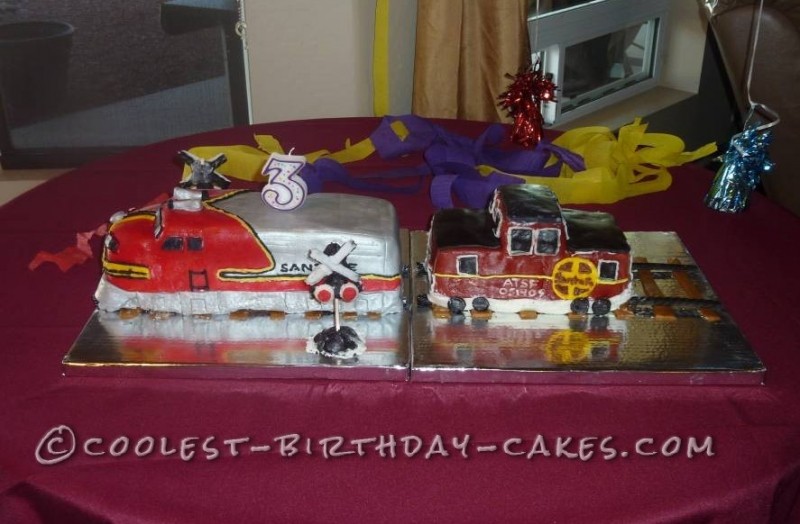 I asked my son who was turning three “What kind of birthday cake do you want?”  His answer was shocking, “I want a Santa Fe cake!!  He had recently seen the Santa Fe from a train video. Since then, I think Thomas the Train has taken second place. For years I had kept a cookie jar … Read more 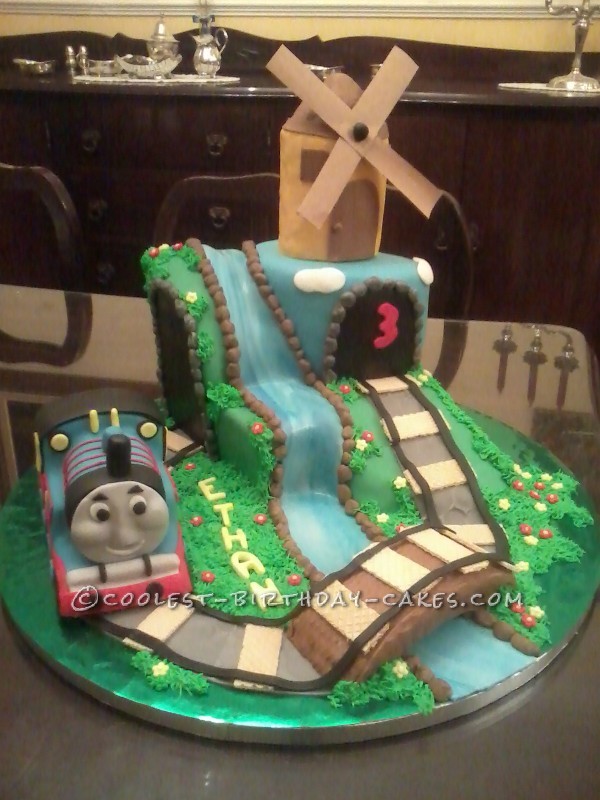 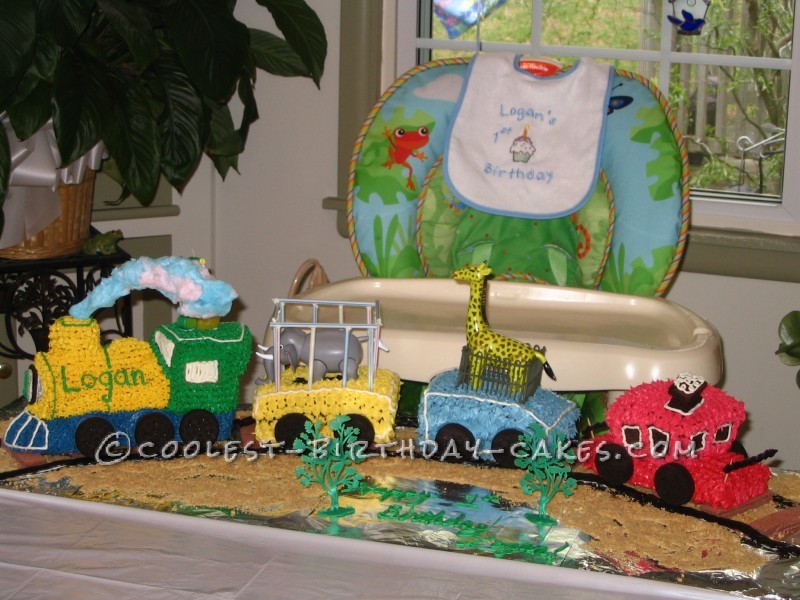 I have made creative cakes for both of my boys, ages 5 and 2, each year for their birthday, but I think this circus train cake is most special to me because it was the very first cake I had ever created and I wanted it to be perfect for my first son’s first birthday!  … Read more 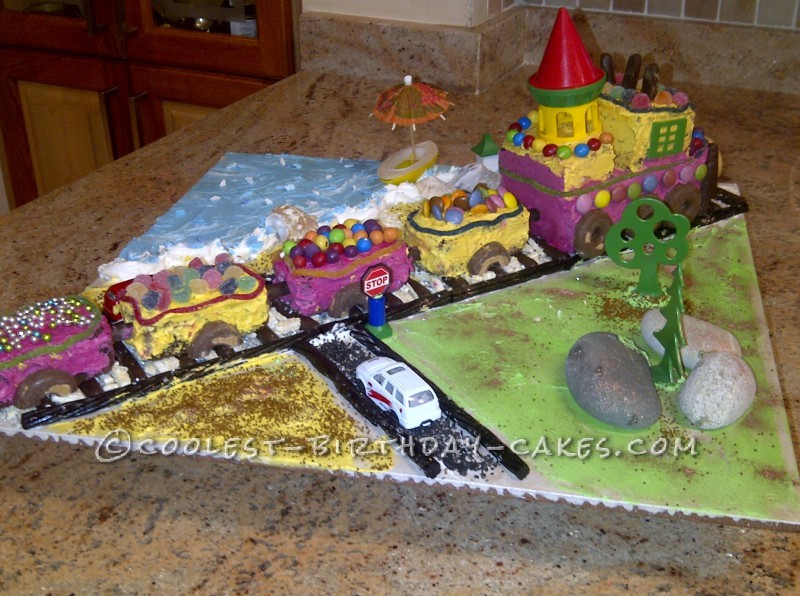 I used a floor tile as a base as the cake boards that I had were too small to create the scene that I had envisaged. I baked mini chocolate logs and decorated each log as a mini carriage. I used log biscuits and liquorice as the tracks and decorated either side of the tile … Read more 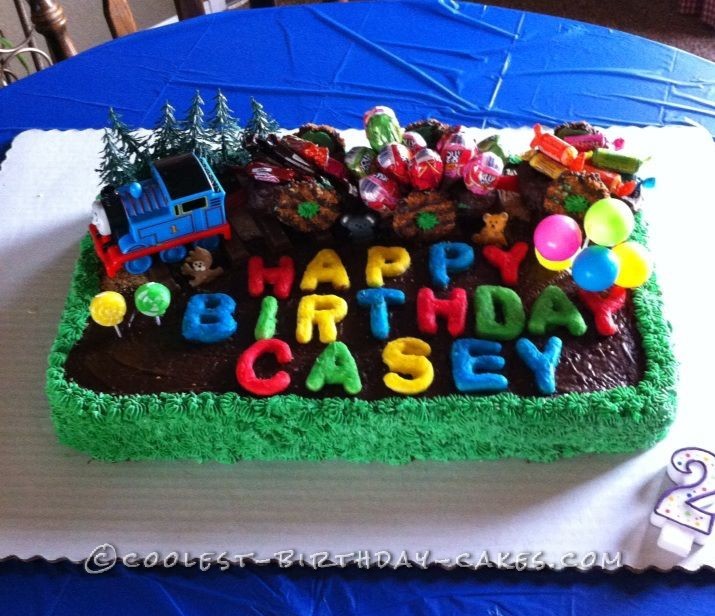 I made this train cake for a co-worker’s son’s 2nd birthday. I wanted it to be a fun colorful cake that a 2 year old would like.  Everything but the train engine, candles and trees were made of candy or icing.  For the wheels I use coconut chocolate cookies.  The letters are iced sugar cookies. I filled … Read more 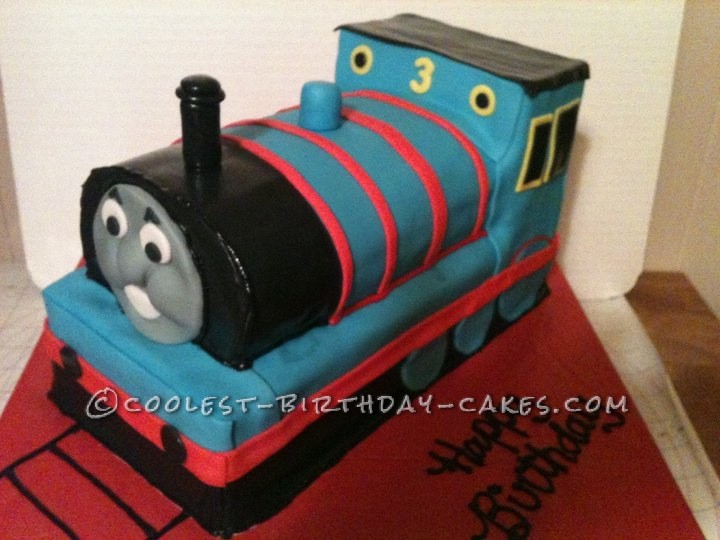 When asked to make a 3D Thomas The Train cake, I was a bit worried as I had never sculpted a cake before. I started with a 2-6″ round cakes and a 2-quarter sheet cakes. I had to cut and sculpt for the body and head of the train. I really enjoyed molding Thomas’ face. … Read more 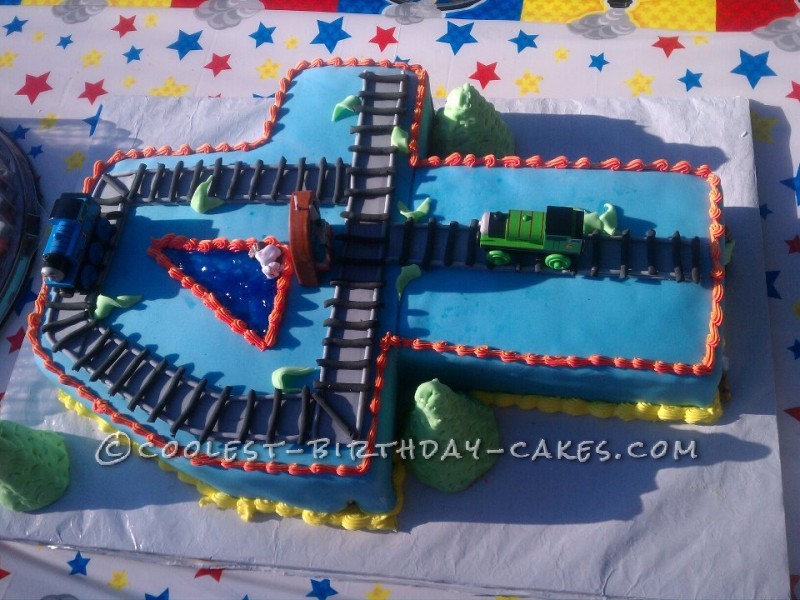 This Thomas the train cake was very difficult to make, but I cannot take all the credit, y friend helped make it. It was a success, my son absolutely loved it. It was gone in a matter of slices. The fondant was a little hard considering this was the first time I was using fondant. … Read more 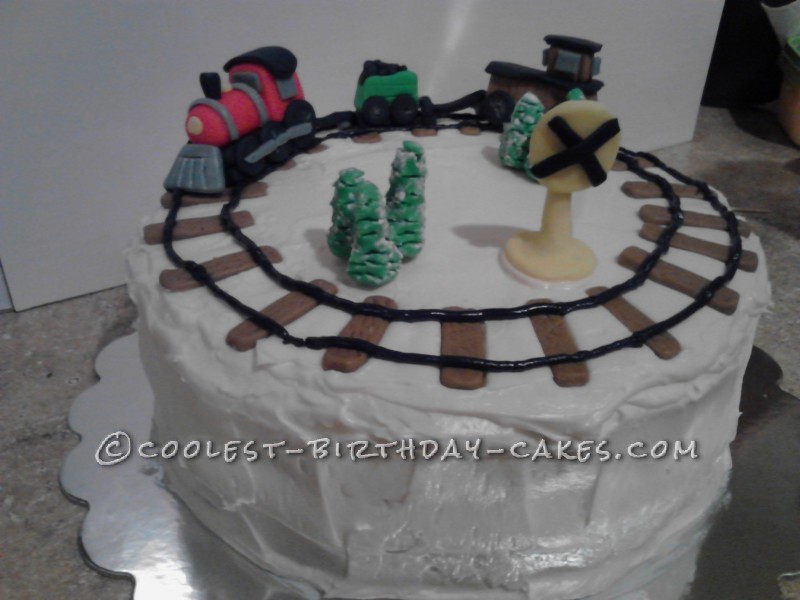 The train cake is carrot cake with butter cream cream cheese frosting. The trains are fondant shaped and molder smaller pieces were made ahead and glued on with Vodka.  We used luster dust to make the metal pieces shine. I used our dining room table to roll out the fondant for the tracks so they would have a natural wood … Read more 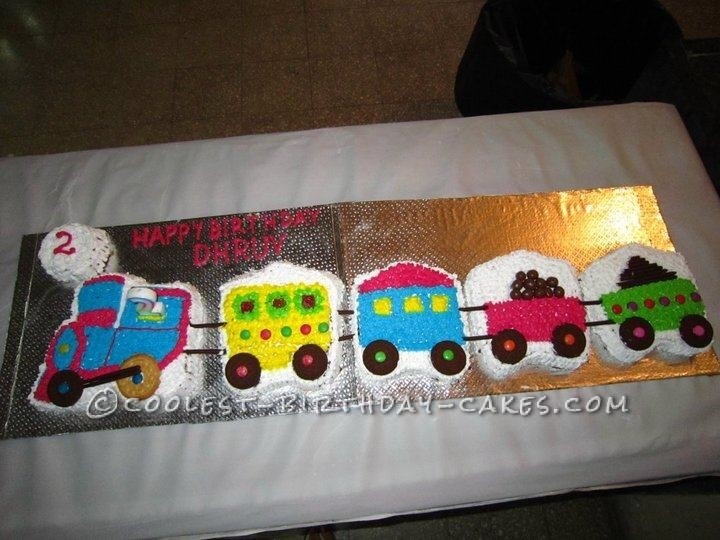 I made this cake for my son’s 2nd birthday. It was made from a Wilton cake pan in the shape of a train engine . The rest of the bogies were cut free hand from a template. The cake was boxed cake mix rich chocolate with eggs available in India. Totally used six single pan … Read more 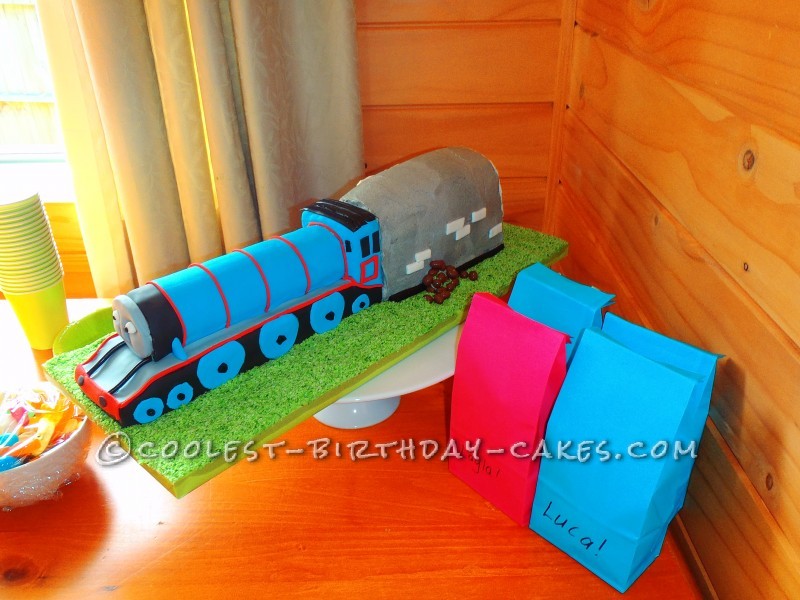 When my 4 year old wanted a Gordon cake for his birthday I freaked! For anyone who doesn’t have a Thomas the Tank Engine fan, Gordon is one of the train characters. I NEVER wanted to do a character cake. I have made a train, plane and fire engine cake in the past but they never were expected to … Read more 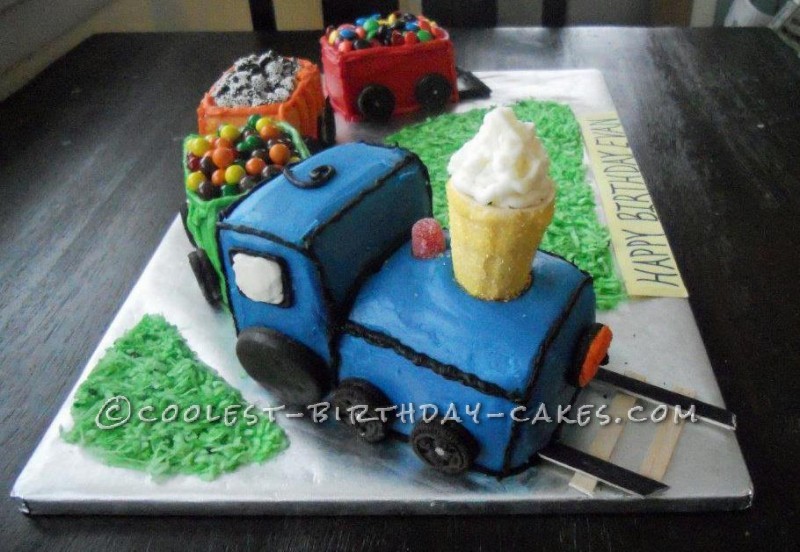 My 6 year old LOVES trains.  It was fitting that he have a train cake for his birthday.  I used buttercream to cover this cake instead of fondant. For the wheels I used mini oreos, the steam spout was a mini icecream cone  rolled in sprinkles and filled with white buttercream frosting. It was a hit with … Read more 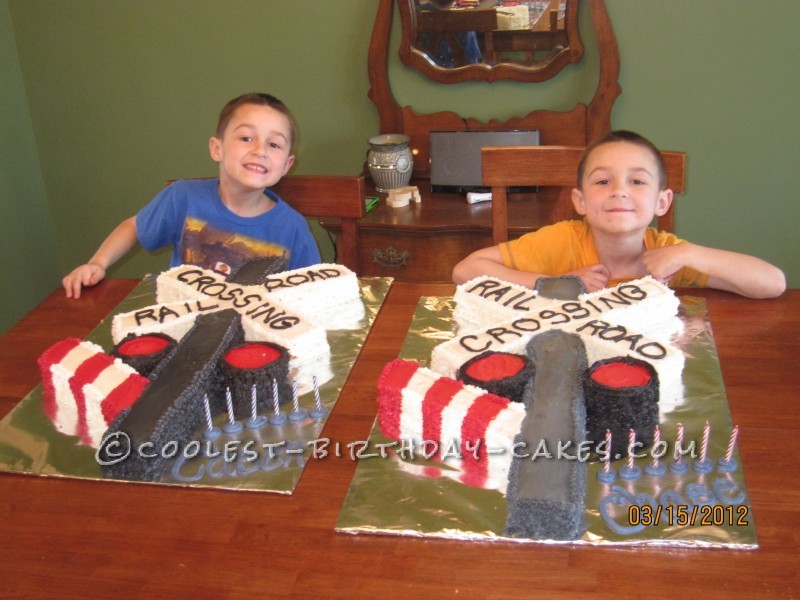 My twin 6 year old boys LOVE trains! For the past few years they have requested train cakes. I was out of ideas and one day while waiting for a train I hopped out of the car and took a picture of the crossing with my phone. And that is where this railroad crossing gate … Read more 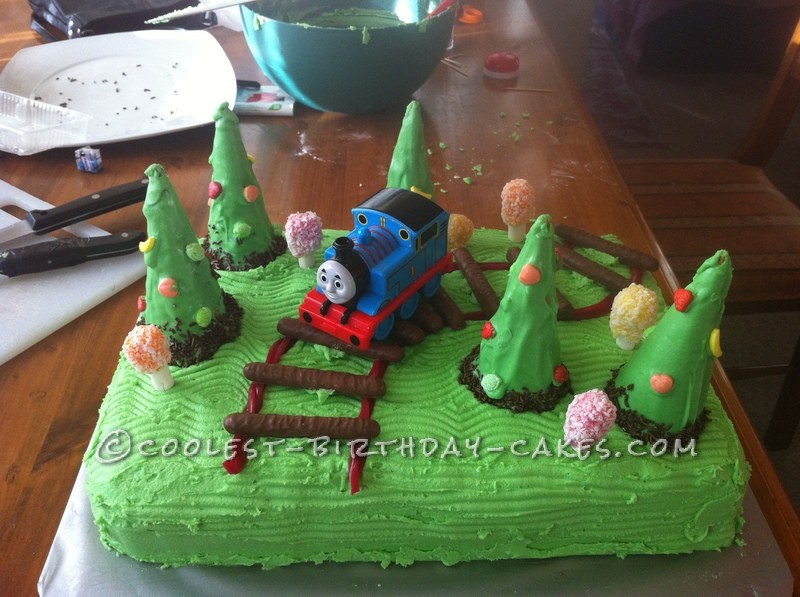 I baked a delicious and easy chocolate cake for this train cake and let it cool.  I turned it out onto a cake board I made from a baking tray and silver paper.  Then I made green vanilla butter cream  and spread it onto the cake with a spatula and created a grassy effect with a serrated knife.  … Read more 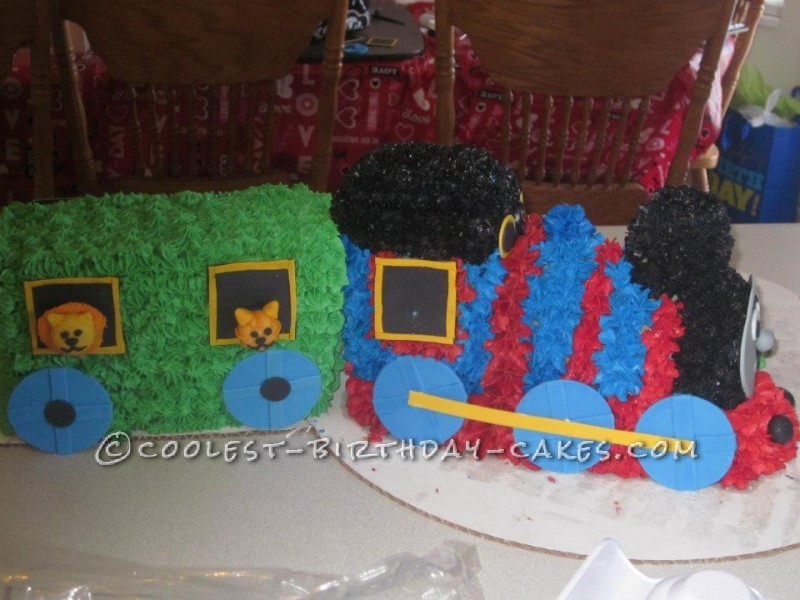 This Thomas the Tank Engine cake took me 21 hours to make this for my son’s first birthday. I’m still surprised how well it turned out. Getting the frosting right was difficult. Everyone loved it especially my son. I wanted it to be perfect. I worked all week including the day before my son’s party. When … Read more 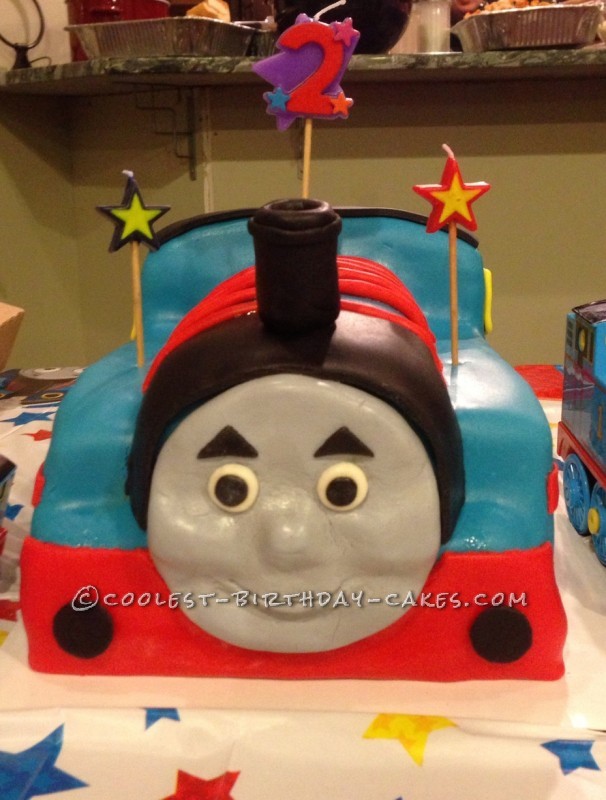 I just made this cake for my son’s 2 year old birthday party since he has become obsessed with all things trains and it was a great success. I think it’s something to be proud of when most of your guests take pictures of your cake on display. Here are the basic steps I took … Read more 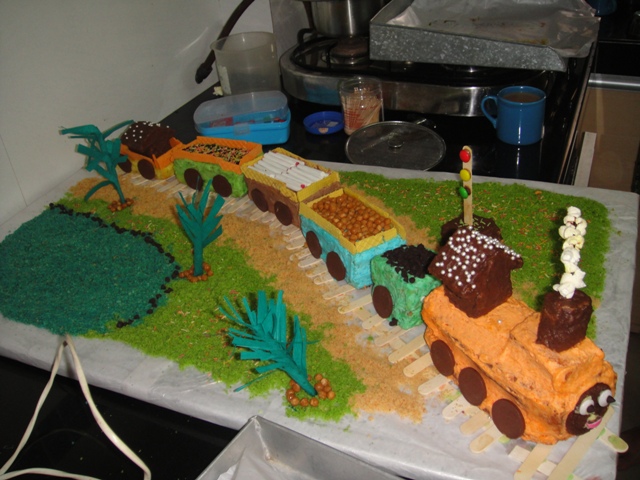 This Train Cake is for Rishika’s 5th birthday party on 2nd Jan 2011 in Mumbai, India. I made 6 cakes – 6 inches X 3 inches loaves (I have used normal sponge cake) – trim the edges of 5 cakes to make suitable sized train wagons and an engine (cylindrical shaped with a 2 cm rectangular … Read more