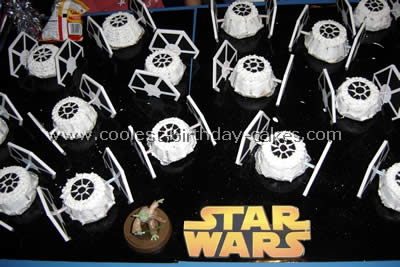 My seven year-old son is a BIG Star Wars fan and he obviously chose that theme for his birthday party. Since he was one year old I have done almost all of his birthday cakes and this year was not the exception. I had no idea of which character would be better for his Star Wars cake, Darth Vader was too black (considering that children would eat a lot of black food coloring), R2 D2 was too complicated although it was my best choice. In the meantime I had a get together with some friends and baked a Bundt cake… that was it! It looked like a TIE Fighter ship!! I only had to make some wings and it would look as if it was cut in the middle. Better though was when I remembered that I had a similar shape in a six cupcakes Bundt pan… if I made those ones there would be a ship for each guest! And that’s what I did…

First I did the wings with a pattern for a TIE Fighter mobile that I got at the Star Wars website in black foam board (the thickness of the board would help them stand straight). I did the edges and radiated details with white Duck tape (I had to cut it lengthwise so it would be the right width). I attached circle stickers to both sides of the wing to finish the details and taped a piece (about one third) of straw to attach them to the cakes.

A day before the party I baked the cakes and started decorating them with buttercream icing, plain on the sides and with a star tip on the top. I decorated Oreo cookies for the window and placed them on top of the cake. For that night I left them in the fridge (just to let the icing dry) and the next day before the party I attached the wings.

The black background is made with black cardstock paper sprinkled with white finger-paint. To avoid placing the cakes on the cardboard I opened some cupcake foil and used it as a wrap for each cake. To finish the details (and most of all to make sure it looked like a Star Wars scene) I printed a logo and pasted it on the background and added a Yoda cake topper that I had previously bought.

This Star Wars cake was a big success!! All the guests were excited about having their own ship! And for my son it was the best birthday cake ever!