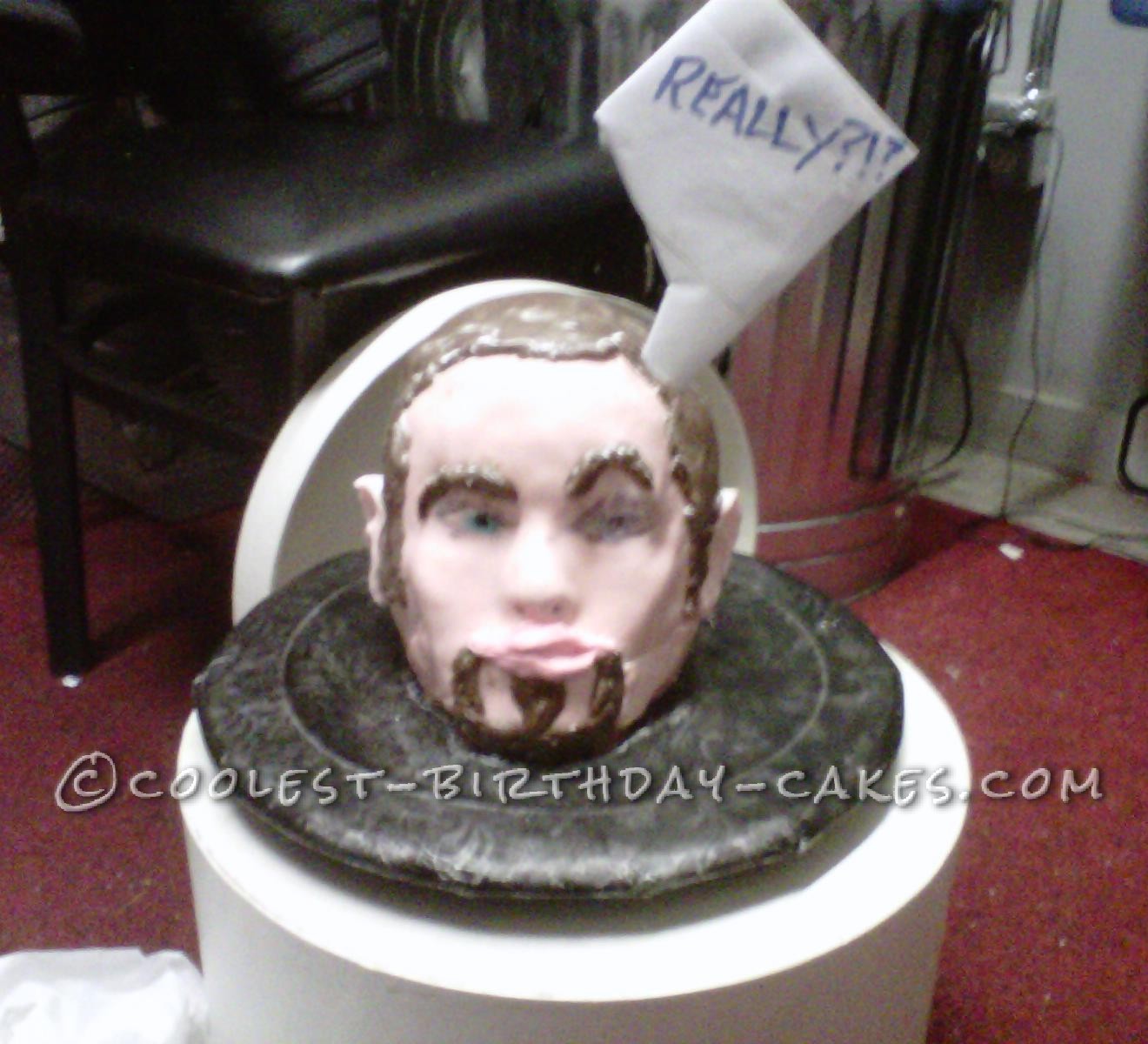 My name is Bradi. I used to manage a bar in Seattle. Our first year of being open for business, I made the decision that instead of giving gifts to my employees, and spending a bunch of the company’s money, I would make them each a cake for their birthdays. I had 20 employees. Let’s just say this lasted for only a year!

Anyways, our main bartender, Todd, was a character to say the least and would tease us all to no ends, so I came up with this creative idea to design a cake that would resemble his head , with an exclamation bubble, including the saying he was always heard using.

Having the same twisted sense of humor that he has, I knew he would enjoy the bright idea of him cutting into his own “head on a plate”, and that with each slice, he would be cutting into red velvet cake, resembling blood (in doing this I found everyone has the same twisted sense of humor as well, as it was the hit of the year as far as cakes go!!). 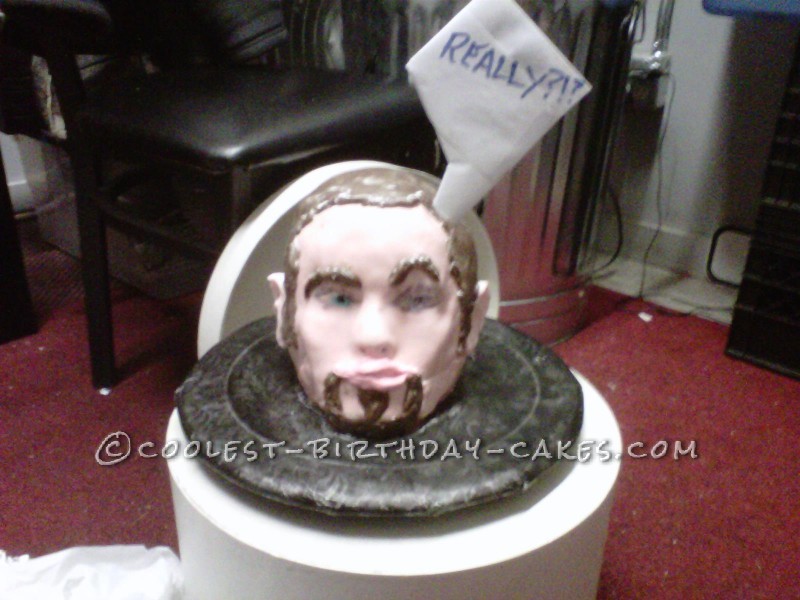 How to Bake a Head

So, being my first experience of working with red velvet cake, I soon found out just how messy and crumbly it is, and shows on EVERYTHING as far as getting it all over, during the crumb coating step…my God, I swore myself away from using it ever again (which didn’t last long…see my next submission entitled “Roller Derby Girl”…)

Keep in mind, this is my VERY second time of ever cake sculpting  (my first being a truck cake). I started with baking the cake, in multiple pans, the round the same size of a human head, along with the best purchase I could’ve ever have made, a ball cake pan kit. I also took a plastic white mask, and tin foil, formed a couple of pieces of the foil into the mask, and removed it, creating a “mask pan”. I put the “mask pan”, face down into a loaf pan, in order to have it stay it’s shape, while baking, and filled it and the rest of the pans 3/4 full of batter.

With all of the pans (ball cake pan halves, mask face pan, and 3 6″-8″ round pans), all baked, it came out to about 4 cake mixes worth, of batter that I used. Remembering to grease and flour all of the pans very well!

After cooling them, and taking them out of the pans, I then wrapped them all up with wax paper and tin foil, and froze them over night. 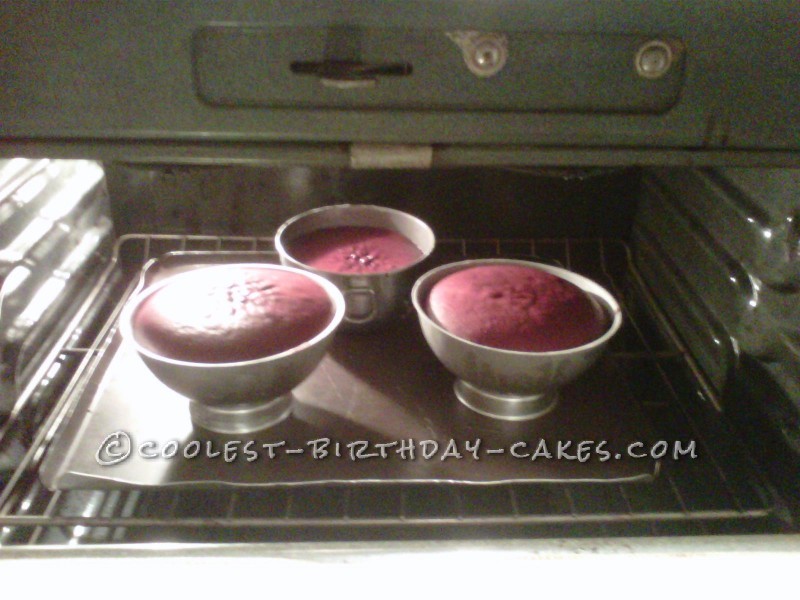 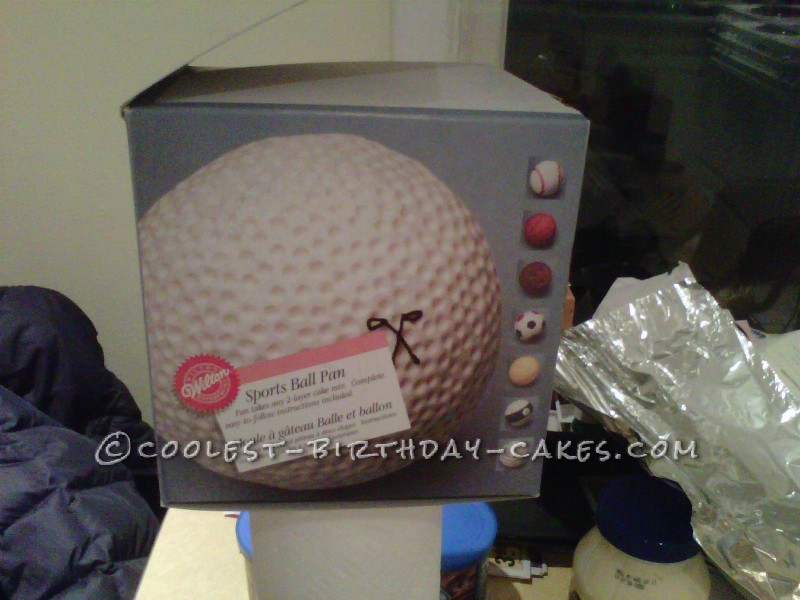 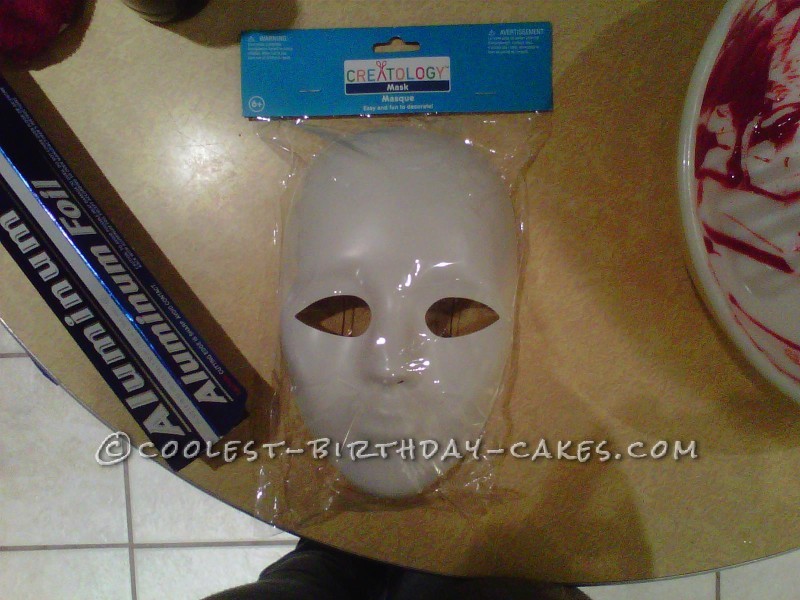 The plastic mask used to form the facial area 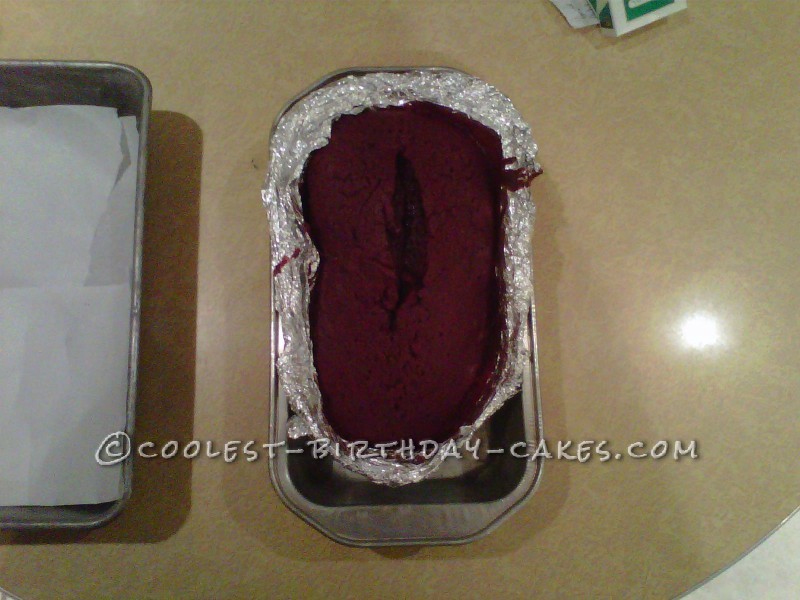 How the face cake came out 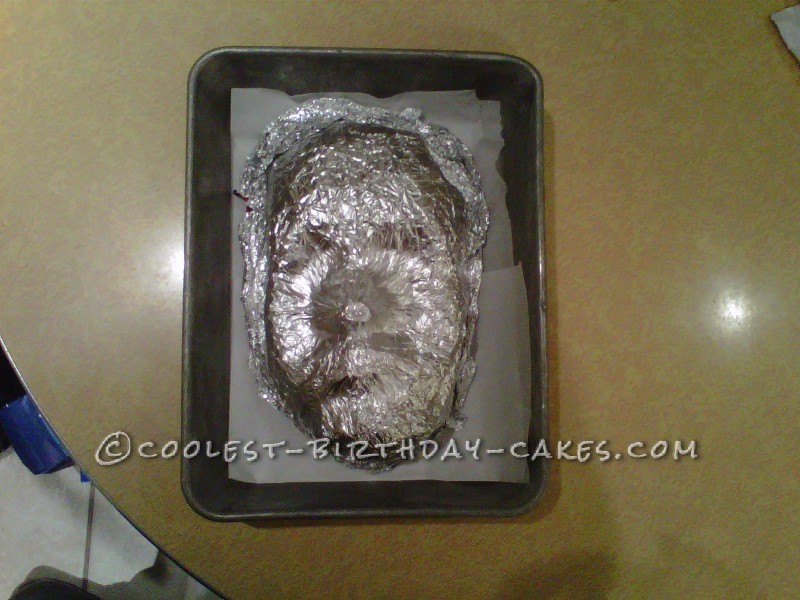 how I formed the face cake pan

I then formed his nose and ears out of skin colored fondant, along with once again, using the plastic mask, to form the face. I laid skin colored fondant, that I mixed up by hand, and laid that over the mask, pushing in the areas of details, nostrils etc. and let dry for 2 days on wax paper. 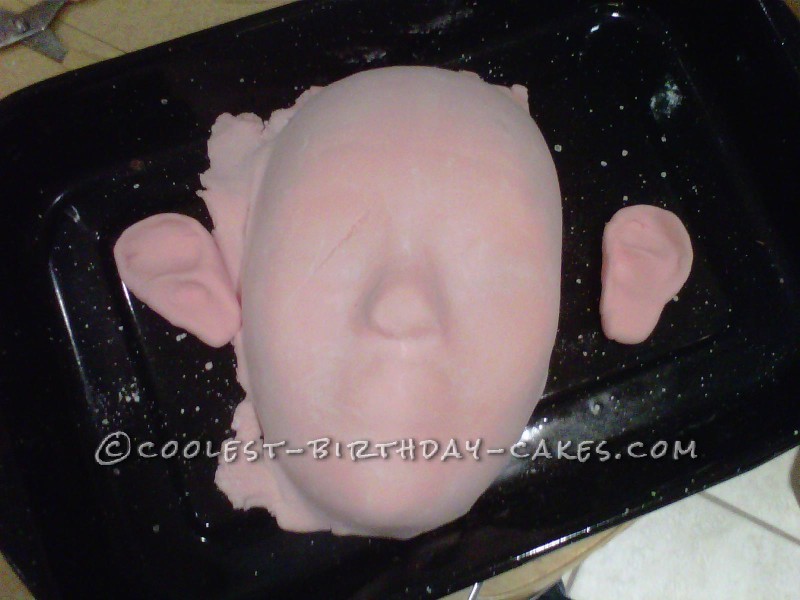 Head in a Freezer

When I was ready to carve, I took the cake board, covered it with cake paper, and cut one of the ball halves, slicing a bit of it off, off the bottom of the outside round, attached it to the plate with cream frosting, creating the base of the chin area of the head, which lent well to keeping it from rolling off the board.

I then placed the rest of the rounds onto that, attaching each to another by means of cream frosting. Finally the top ball half, to create the top of the head. Carving these to be rounded off like a human head. I then attached the face mask cake, by cutting it concave so it would attach evenly to the rest of the head. Placed all of this  “head ” back into the freezer for a few hours to setup! When my husband opened the freezer, to cook dinner that night, it actually startled him, from my lack of remembering to inform him of the head in the freezer! OOPS!

Now the crumb coat. That was kind of hard. In between layers of cake being attached to the other, I found I needed to keep as much of what wasn’t being used yet, in the freezer to keep it all frozen and workable.

head in a freezer.

I then, was ready to attach the face. I first laid brown fondant onto the back of the head. Then the face mask which was drying onto the front. I then took more brown fondant, and created his mustache and eyebrows. Drew on his eyes and shaded around his ears, eyes, lips etc.

Made the exclamation bubble out of cardboard, put everything into a hat box, surrounded by crumpled up tin foil to keep it steady during transportation. 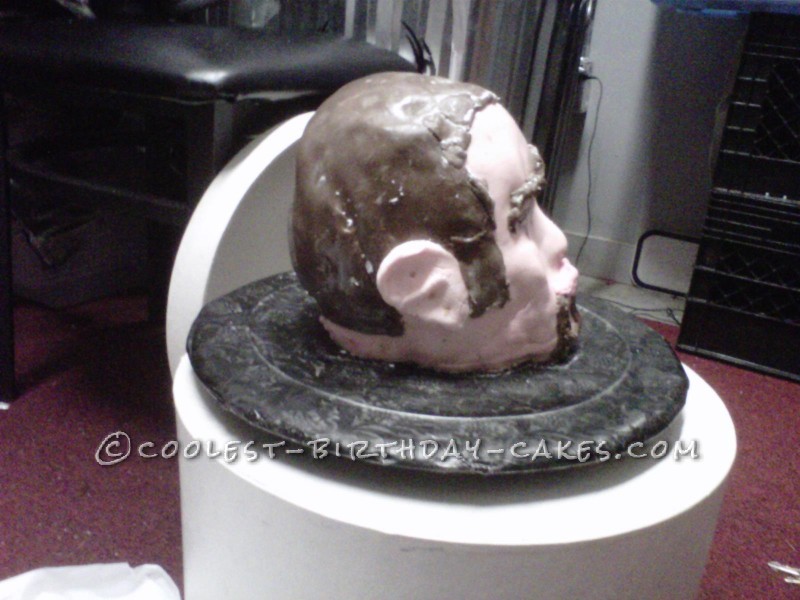 Side of head transported.

When it was time to blow out the candles, I unveiled it to the birthday boy in the office. He cried with laughter (which the dude doesn’t laugh, he usually is very dry sense of humor), and in bringing the cake up to the front of the bar, which was through a mass of people, he actually had to carry it above his head. It resembled a tribal sacrifice, with his head on the plate being carried over the hungry masses! It was a bit sick, but completely hilarious! 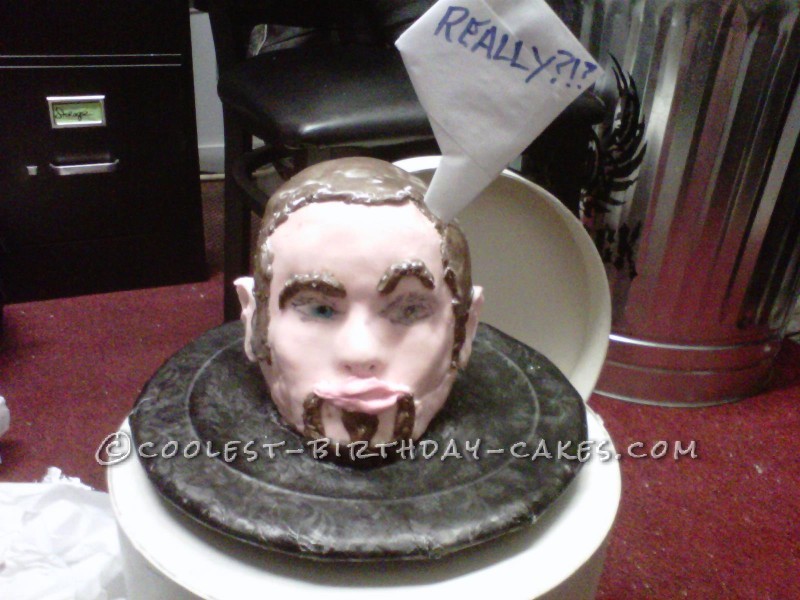