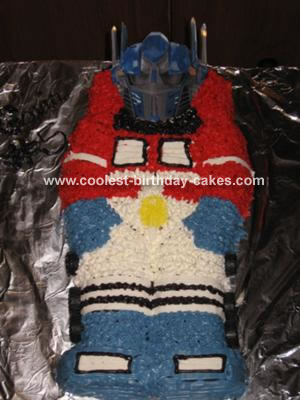 My son’s party was at the zoo, but he LOVED the Transformers… so I let him have his Optimus Prime cake rather than a zoo themed cake.

I used an old Wilton’s robot/space man cake pan produced in the 70’s (found it on e-bay!). Looking off of an image of Optimus Prime, I made the cake into Optimus just by making a few adjustments with the icing.

I printed of a pic of Op’s face, laminated it, and glued it down with icing. I took the wheels off of some cheap trucks and stuck them in the sides because the real Optimus transforms into a huge truck.

I used two boxed cake mixes. I used white cake frosting and colored it with food coloring. I used the pre-colored Wilton’s red icing in the spray can for everything red.

I also made cupcakes with white icing and blue/red sprinkles because the cake pan did not provide a lot of servings. It took me awhile to make him… but I am still pretty new at this cake thing!