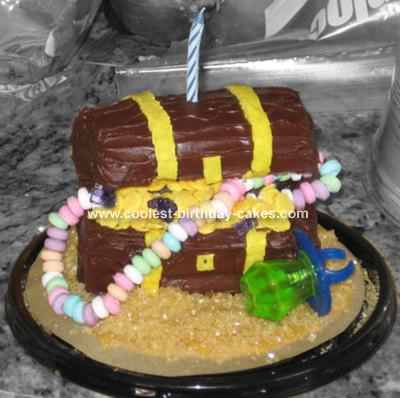 I made this treasure chest cake for a friend. Her son was turning one and her uncle was also having a birthday. The party was pirate-themed, and the main cake was a pirate ship. However, a one-year-old needs a cake of his own because he’s liable to get slobber on it when he blows out the candle!

I wanted the whole thing to be edible, and it was (mostly)! I used Suzy-Q snack cakes to make the base and half a Suzy-Q with Ho-ho snack cakes to form the rounded top. I frosted the whole thing with ready-to-use chocolate frosting. I made the gold coins, the brass straps and the latch out of colored gum paste. I dusted the gold coins with edible gold shimmer dust (a Wilton product) and bought a tube of yellow sparkle gel (another Wilton product) to glue them in place. (I think a dot of honey or corn syrup would likely work just as well.) I also bought a stick of grape rock candy and broke off some crystals, which I think look like amethyst, and put them into the treasure chest. The sand around the base is really C&H washed raw sugar. I think the over-sized scale of the Ring-pop candy and the candy necklace add a whimsical touch.

The hard part was getting the lid of the chest to stay on. I used a wedge of cake to help support it at an angle, but it still wanted to slide off toward the back. I ended up using a couple of toothpicks to anchor it in the right position, so those had to be removed before the baby started eating.