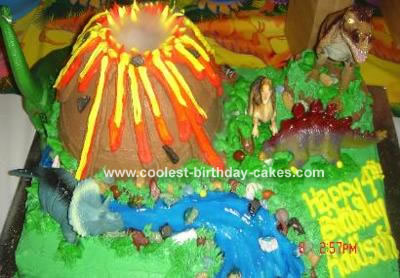 This was a Volcano cake for my son’s 4th birthday. He was so excited about his dino cake. I made the base of the cake out of an 11x15x2 cake pan which I made 2 cakes into 4 layers. I then made the volcano out of a Wilton doll cake pan which I cut a spot in the top for a small stainless steel cup in which I later placed dry ice to make the smoke. I also cut out the stream area of the cake to give it dimension.

I cut a medium hole in the bottom of a parchment bag and made the lava flows out of red and yellow buttercream adding some orange color piping gel on some of the flows to add a little more detail. To get the yellow frosting to stand up on the top part of the volcano edges I put extra powdered sugar into my buttercream icing. I also covered large marshmallows with chocolate buttercream to lift up the T-Rex.

I went around the cake with my grass tip and a large leaf tip then added candy rocks into the water, the waters edge as well as along the top and the bottom border of the cake. I placed a few black candy rocks on the volcano as well.

Finally I placed the dinosaurs on the cake securing them with buttercream adding additional grass and leaves around their feet. Dropped in the dry ice and added a few drops of water on top of it and it started to smoke. My son was amazed!

This Volcano cake took me about 2 hours to decorate. My only suggestion is to have a plan clear in your head of what you are going to put on the cake and the overall look your going for. It makes it much easier if you have a plan and a picture in your head. I baked the cakes the night before, crumb coated them, wrapped them and then started in the morning on the actual decorating. It was a great cake and lots of people were impressed with it’s smoking volcano!