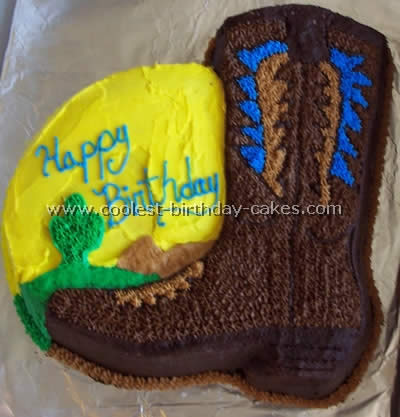 This was a cake for my grandfathers 79th birthday. He is really into the western stuff so searched your site for western birthday cakes and this is what I made.

I just used a character pan and iced it using tips #4 and #16. Buttercream icing works great when doing cakes, doesn’t melt and holds its form good.

I made this cake for Western day at my school to put in the teacher’s lounge. My idea came from other cakes on the Western birthday cakes site. (Of course the fact that it was chocolate made it disappear really fast!) I just baked and iced white a regular 9×13 cake. I used a very large star tip to pipe on the border to look like a lasso. To make the boot I found a coloring page of a boot on the internet and printed it. I resized it to fit the top of the cake and cut it out. I then traced around the boot and cut-out with a toothpick into the icing.

I piped the outlines in black and starred in the appropriate colors. It was a hit! 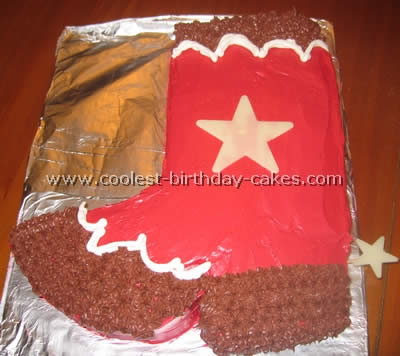 I made the two western birthday cakes for a boy and girl’s birthday theme party. The cowgirl is the general doll cake made in a glass bowl with red licorice to make a lasso and a Barbie cowboy hat.

The boot cake was made in a regular 9×12 pan and cut in the shape of a boot. I used a glow in the dark star (the kind that kids put up on the ceiling) as a decoration in the middle and a small star taped to a toothpick as a spur. 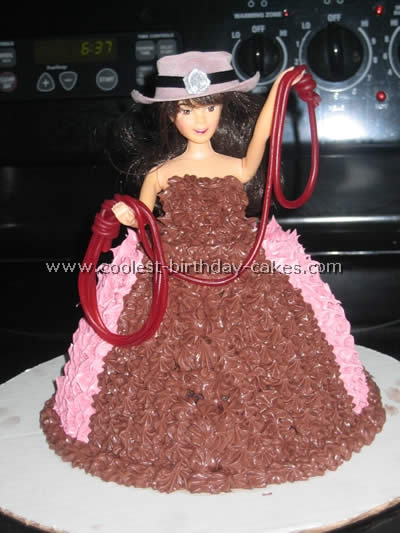 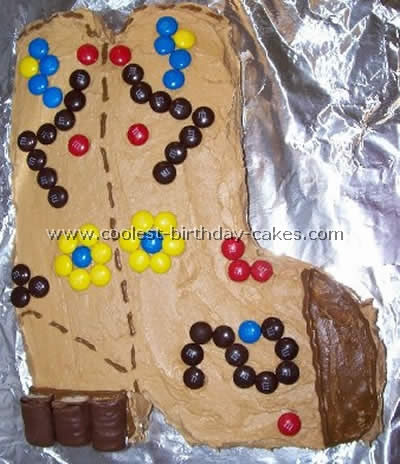 My son’s school had a western theme for this school year so I had to make western birthday cakes. He picked a cowboy boot for his cake to take to school.

I got the basic idea from www.brightideas.com. After seeing the original there I used my own cake recipe and frosting recipe and basically just followed the decorating ideas. I used all vanilla frosting and colored it with gel color. My cake was smaller than the original so I used less M&M’s and modified the decorations. The boot template is also available on the M&M’s website. This was very easy to accomplish and there could be many variations on the basic design. 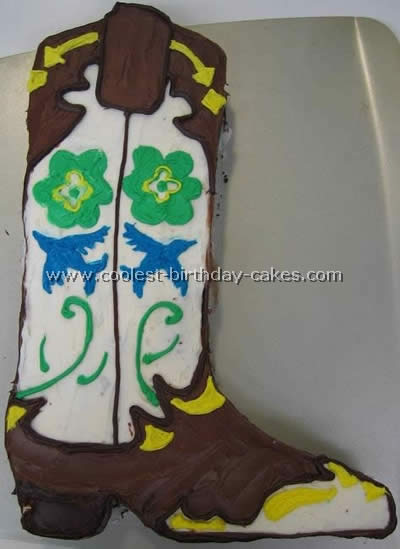 My co-worker who LOVES cowboy boots, wanted a western birthday cakes scene so I made a boot. I actually took a photo of the actual boot she wanted from a website and made the cake from that!

I made a template from plain paper and traced the shape onto the cake which was made in a regular rectangle pan. Then I mixed food coloring into white frosting to get the colors I wanted and started decorating! I like using plain zip lock bags and cutting off the tips to ice cakes instead of tips and paper because I think it’s easier for clean up and in case you don’t finish all of it up you can pop it in the fridge and use it next time.