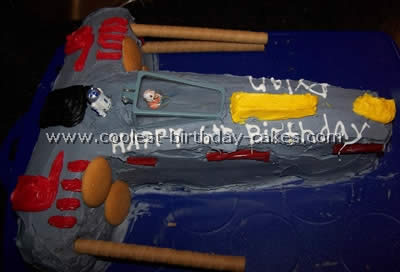 My son was turning six and he said he wanted an X-wing cake. So I searched the internet but could not find one. I made this cake the night before his party just in case it didn’t turn out that I could run to the store and purchase one the day of his party. He had no clue I was going to attempt to make it. When I got done I called him in to show him and he said right away “Wow mommy it’s a Star Wars X-wing”… So I must have done a good job that he could tell what it was.

I made one rectangle cake and one pan of mini loaf. I used the rectangle to cut the center of the cake and the mini loaf cakes I cut the tops off to make flat before taking out of pan. These were used for the wings. Then I used Chocolate cereal straws, Nilla wafers and red licorice. Plus I raided my son’s star war toys for the pilot cockpit cover and R2D2.