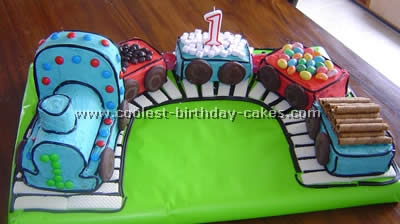 For my son’s first birthday we made a train shape cake. We actually used the large roasting dish as we didn’t have a big cake tin. After the cake was cooked and cooled we cut it into the four squares for the trailers. For the engine we actually cut another square for the base then a rounded bit for the back of the engine.

To make the engine’s round bit we just purchased a rolled round cake from the supermarket. For the track we used waffle biscuits, the wheels are choccy mint biscuits. I then took a wander down the lollie section to look for bright things to place on the trailers, M&M’s, little marshmallows, little eggs and biscuits. The links for the trailers are sour snakes linked up.

We covered the chopping board with green paper to create the grass effect. My son loved it. 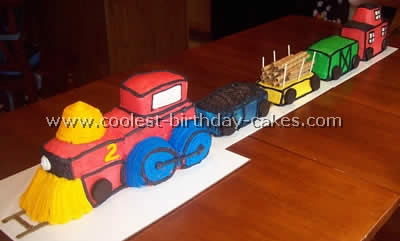 I made this train shape cake for a friend’s little boy’s second birthday party. She had an invitation printed with a train on it with all these different types of train cars on it. I thought it would be nice to have the cake look just like the invitation.

I baked all the cakes using different sized loaf pans and tart pans. I used the larger loaf pans to make the cars and the smaller ones to trim out the locomotive and caboose and then the tart sized ones for the wheels on the locomotive (not shown on the assembly pictures but you can see it in the final pictures).

I assembled them all first using dowels and icing to hold them together and then iced it in buttercream icing. The coal car was cut out and filled with crushed Oreo cookies and sprinkled with shimmer dust to give them a sparkle. The logging car is Pirouttes. These make great logs. The Box car is just cake as well as the caboose but they are all finished with Oreo cookie wheels. This train shape cake was a big hit at the party!

We made one boxed pound cake and one rainbow-chip boxed cake turned into a pound cake with a recipe found on the internet to form this train shape cake. This ended up making two regular loaf pans, four mini loaf pans and one soup can (be careful to give it plenty of head space to rise when baked). Be sure to put a cookie sheet underneath the can cake just in case it overflows.

The other two cars were made from one mini loaf, each with the tops cut off to make them straight and a small amount removed to allow the crushed Oreos (coal) and nerds a place to sit. We used pretzel sticks as logs. 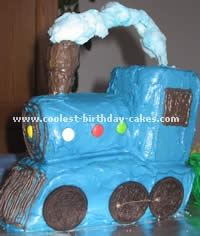 I used ideas from this website to create this beautiful train shape cake for my son’s second birthday. I prepared the cake board by coloring some ready made marzipan icing in green and rolling it straight on to the board then cutting the excess. Next I laid out the train tracks using liquorices. I baked two small loaves of butter cake (and a third as spare)to construct the cake with.

I used a ready made chocolate sponge roll for the engine shape and cut all the other carriage parts from the home made cake. I outlined the train with a black gel tube. I then iced each part and assembled it. Now the fun part, the wheels were done with mini-Oreo cookies and Smarties. I decorated the carriages with lollies and put some cute animal candles. I stuck a number two candle on the front of the engine, and voila, a train shape cake that all the kids loved!, 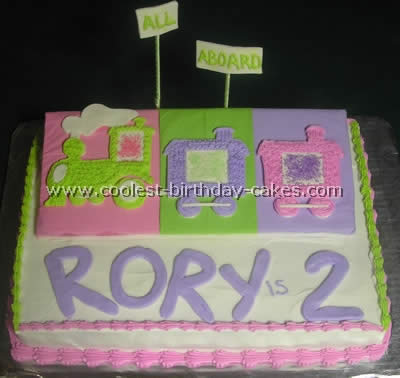 I was asked to do a train shape cake for a two year old girl that loves trains. All the trains were boyish looking so I had to come up with this one using the colors her mother picked out. I just used a 9×13 cake and buttercream icing.

For the train I covered cardboard with the napkins and used satin ice to make the train which I iced with buttercream. I used bamboo skewers for the flag poles and satin ice for the flags. It was real easy and the little girl loved her “choo-choo” cake!, 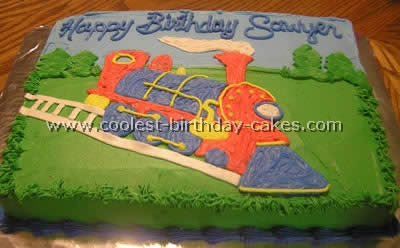 A friend asked me to do a train shape cake for her son’s third birthday. I used the plate as a design and just drew it out on the cake using a toothpick, then filled it in with buttercream icing. She said it looked great with the decorations and was a big hit for her son! 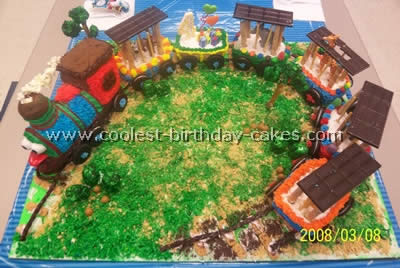 The train shape cake was for my son’s fourth birthday. I took ideas from several train cakes on this site and added ideas of my own to make it a circus train. I used a Wilton Train cake pan for the engine and small loaf pans for the cars. The cars were turned into cages by using Pringles sticks for bars and cookie sticks for the support corners.

Each car was topped with a Hershey’s bar. For the giraffe car I removed two blocks from the Hershey bar for head room. Then the cars were decorated using a star tip and several colors of icing, M&M’s and sugar candies. The engine also contained chocolate and cherry licorice for detailing. The face on the engine was the only non-edible part of it all.

The most time consuming was the landscape of the train shape cake. The tracks were chocolate licorice and Graeme cracker sticks attached with icing. The trees were pretzel rods, for the trunk Pringles sticks, for branches marshmallows covered in green food coloring and coconut were the leaves. The trees were placed in leftover tops of train car loaf pan cakes which allowed them to stand. The grass was coconut mixed with green food coloring. Graeme cracker crumbs and 100 calorie pack Oreo crumbs were used as dirt around the grass and the tracks and 100 calorie pack chocolate chip bites were used as rocks. 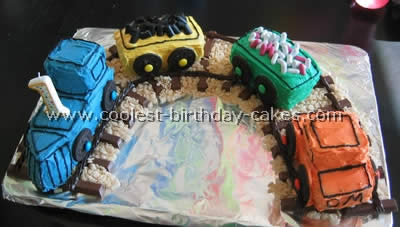 Thanks to this site I made my little boy’s first train shape cake. I used small loaf rubber pans with butter cake and chocolate cake box mixes. I found that the butter cake mix was easier to frost. I baked the six loaves and put them in the freezer the night before the party.

The morning of the party I mixed food coloring with white icing and cut and shaped the loaves. I used four loaves for the train and then I used the extra loaves for the front of the engine and the caboose. For the tracks I used Kit Kat bars and chocolate licorice ropes and I sprinkled rice cripsies in between the Kit Kats. A great tip is to heat up the licorice in the microwave for 10 seconds and then they will stick to the Kit Kat bars and stay put.

I had so much fun with this cake that I can not wait to make another one for his next birthday! Thank you to all of you and your wonderful cakes! 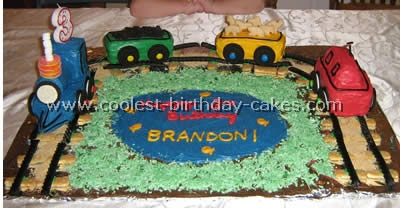 I got the idea for this train shape cake from this site (thanks!). I made this for my son’s third birthday because he’s all about trains right now. It was a huge hit! I did the following the night before the party. I used two fun-fetti cake mixes and baked it in four mini-loaf pans (for the four cars) and one regular loaf pan (to cut up and use for extra pieces). Then I colored the frostings – the red took three small bottles of red food colorings to get it red and not dark pink. The blue and green took two food colorings each and the yellow only took one. If you do this all the night before you’ll be helping yourself out a lot!

The tracks are black licorice and the ties under the tracks are graham cracker sticks and then I used graham cracker crumbs to make the “dirt” around and between the ties. I used broken Oreos for the “coal” in the coal car. I used coconut colored with green food coloring for the grass and a little bit of blue frosting for the pond. To make your own piping bag for the lettering just put some frosting into a Ziploc sandwich bag, snip off a tiny bit of the corner and off you go! It took me about four hours to put this train shape cake together. 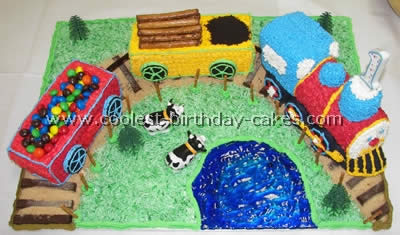 We made this train shape cake for our son’s first birthday. We got the idea for this train cake from this website. We used the Wilton 3D Choo Choo Train cake pan to make the train and two regular loaf pans for the train cars. We used coconut for the grass, Kit Kats for the railroad ties, Graham cracker crumbs for the dirt, Oreo cookies for the wheels on the train and blue gel icing for the pond on the silver cake platter. This created a realistic effect.

We used peanut butter M&M’s for cargo on one train car and pretzel sticks for logs and Oreo crumbs for coal on the second train car. The trains were connected with chocolate licorice. We used Wilton Buttercream Frosting which was easy to work with and held form well. We tried Wilton Whipped Frosting for one of the train cars and it didn’t hold up as well. We also created a fence for the cows to graze in with pretzel sticks. The only thing that wasn’t edible was the cows and the trees.

Everyone was very impressed with the cake. It was amazing!