Cake by Lina B., Huntington, NY 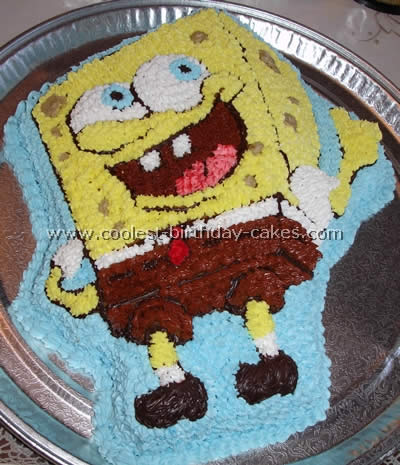 My nephews love Sponge Bob! For my own birthday this year I decided to make a cake that I knew they would love and I bought a Sponge Bob cake form at a craft store. The cake form was the last one and it had no instructions on how to decorate the cake so I just used food coloring, a picture of SpongeBob and my nephew’s detailed instructions for SpongeBob cakes.

I used melted dark chocolate to do the outline. Then I mixed the colors needed and used a star tip going dot-by-dot to fill in the colors taking care to go in the same direction for each section. The cake took about two hours to decorate (even with my nephews sticking their fingers in it). Good luck! 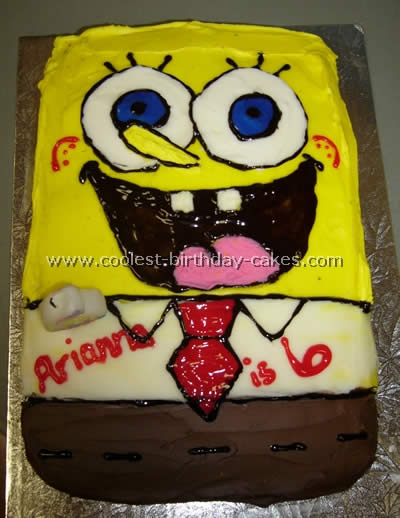 I made this SpongeBob recipe with two boxed chocolate cake mixes and a 9X13 cake pan. Make two separate chocolate cakes then ice the one layer and sit the second layer on top to form SpongeBob cakes. Trim the sides carefully approximately from half way down the cake (1/2 inch or so on a diagonal, check the picture to see what I mean) towards the bottom of the cake going lengthwise (to make a shape to the shorts) then put a crumb coat of icing over all (a thin layer of icing to hold the crumbs in).

Refrigerate (I did overnight) then using all Wilton colors decorate your cake. I used the yellow paste and brown paste. Do not use food coloring! Eyes etc. were made with Wilton gel. I used a buttercream icing but I’m sure any would be great. This cake was an absolute hit with the kids! 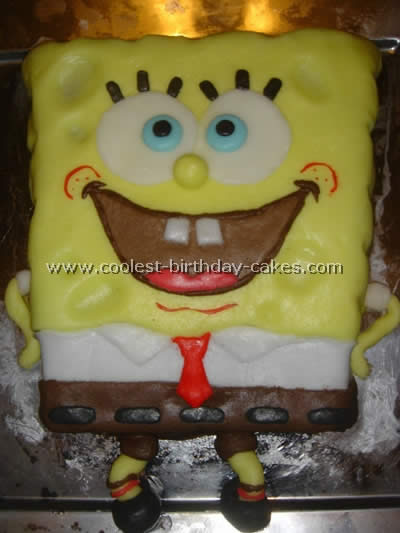 It was a chocolate brownie cake. I made the cake quite thin so that SpongeBob will look better. Everything was made from scratch. I used fondant icing to shape SpongeBob. I used a small knife to actually cut out some badly shaped parts.

I have never made SpongeBob cakes before. It was very detailed work and will surely need someone to massage your neck at the end! 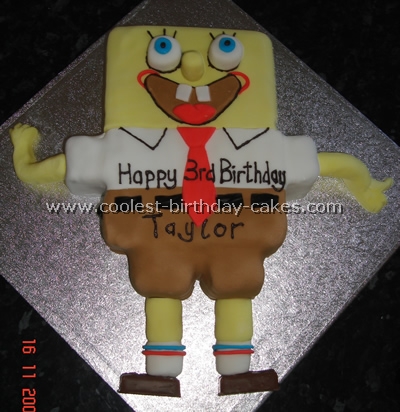 The cake is made from sponge to which I added some yellow coloring. I used an 8″ square tin and cut off some cake from each side to make a rectangle. Some of the off cuts were used to make the arm and leg parts which were sandwiched to the main rectangle with buttercream.

After covering all the cake with buttercream I covered the cake with fondant icing (1kg was enough). I colored a quarter brown and half yellow. I left the remaining quarter white. The eyes, arms and legs are all made from fondant icing as well. The blue of the eyes and bands on the socks were made by coloring a small amount of left over white icing. The shoes are mini Milky Way bars. I piped the outline of the eyes, shirt collar and writing in black royal icing. I colored a small amount of white icing red for the tie etc. The belt is made from halved pieces of liquorice.

I got the ideas for SpongeBob cakes from other pictures on this site. 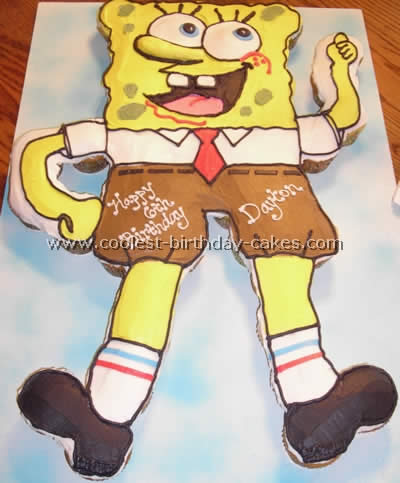 I baked three batches of cupcakes to make this cake! I placed them in the shape of a SpongeBob and frosted over the top using white buttercream frosting. This keeps them all stuck together. Then I drew the picture on top and filled in the different colors to make him look like Sponge Bob! He turned out really cute!

Wasn’t quite sure how he would turn out seeing as I have never made SpongeBob cakes before but it worked! I had to put it on a large foam core board for him to fit on.

Cake by Kathy B., Converse, LA 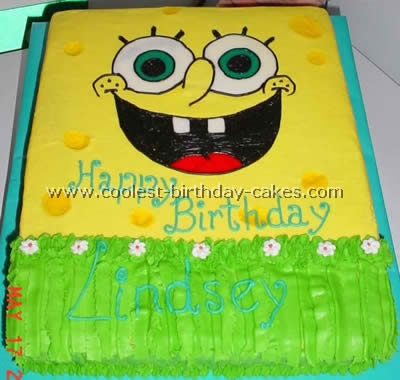 I loved this cake. It was different to the other SpongeBob cakes I have seen. It was for a Hawaiian birthday party. 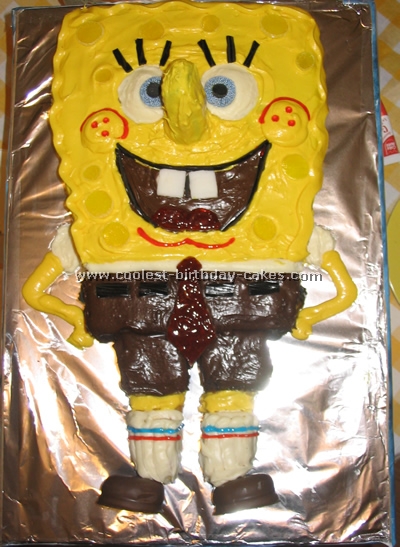 I made this cake for my nephew’s fun fair at their school. I baked the cake in the large roasting pan and cut the shape of SpongeBob. I used the cut off pieces for his legs and nose (I put a wooden skewer through the nose and stuck it into place in the cake).

Tons of fun to make and it also won first prize! Thanks to this website which has many different SpongeBob cakes. I gathered all my ideas from here. 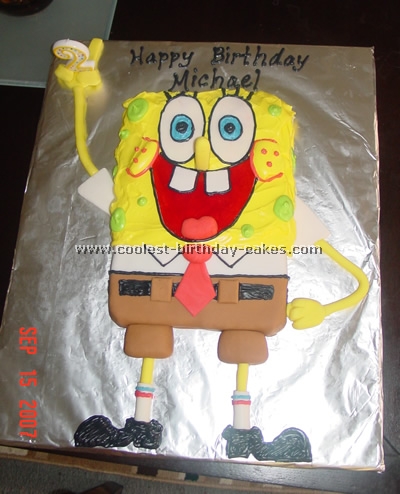 I made this cake with one box of cake mix (any flavor), fondant (colored or white) and lots and lots of white icing and food coloring. This was my first time using fondant and I did not get it colored. I used white and colored it myself. I recommend using colored.

I used fondant for the clothes, arms, legs, shirt, sleeves, eyes, mouth and nose. It took three hours from cooling to completing. I drew SpongeBob on paper from my son’s sippy cup. I was in shock as to how good the cake turned out seeing as I have never made SpongeBob cakes before and was my first time using fondant! 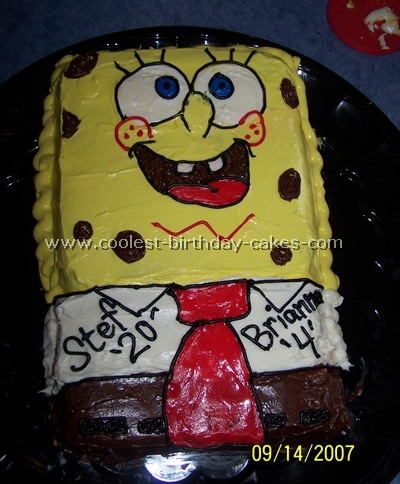 This was my first character cake. Thought it came out okay. I would definitely suggest making your own frosting or using Wilton’s frosting. The one I bought from the food store was way too liquidly but it worked.

I followed some other suggestions for SpongeBob cakes on this site such as making two separate cakes and putting them together. His head is one pan and his shirt/pants are another piece. This was fun, will definitely try again! 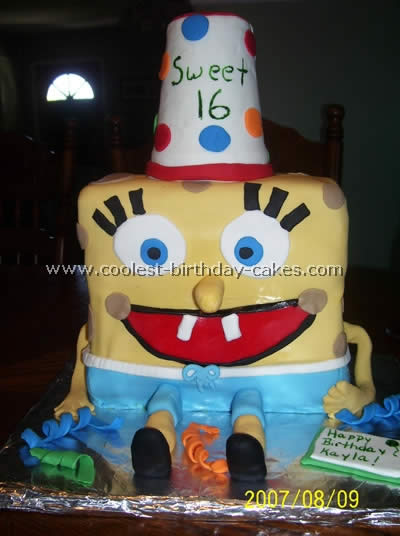 I prepared two 8 inch square cakes. Cut the cakes so that you have four 4X8 rectangle pieces. Stack the first two cakes and dowel them. Next put your third piece on a cake on a cake board of the same size. Frost the top and place the last piece on top. Stack the cake on top of your dowelled cake. Frost the entire cake with a thin layer of icing.

Color fondant to desired shades. Cover entire cake in SpongeBob yellow. Add the desired features. Mine is wearing swim trunks but there are so many SpongeBob cakes around it is not difficult to choose one. 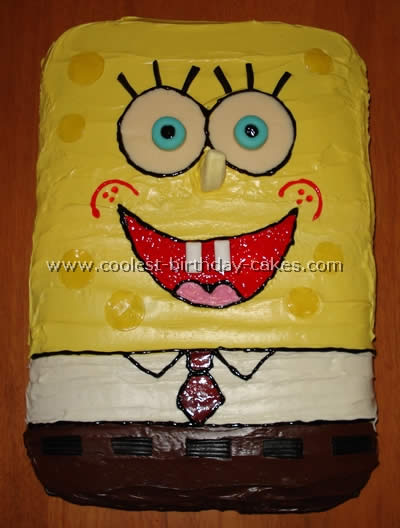 After getting some great ideas from this site, I decided to make my own SpongeBob cake. I used two packets of butter cake mixes and baked it in a large roasting pan. I used Betty Crocker frosting in vanilla, tinting it yellow for his body and chocolate for his pants. I used gel outline tubes in black for around the eyes and eye balls, tongue, shirt, tie, mouth and red gel for the inside of his mouth and his cheeks.

His tie is roll-ups, his belt and eyelashes are licorice, his teeth are juicy fruit chewing gum, his tongue is vanilla frosting tinted pink, his blue eyes are The Simpson’s donut lollies, his spots are rainbow roll-ups using only the yellow and his nose is a banana lolly. 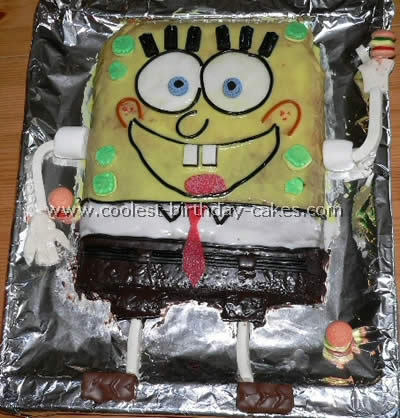 I made this cake for my daughter’s fourth birthday with a lot of help from this website. The base is a sponge cake recipe from Delia Smith. I made two cake dough’s, one vanilla and one chocolate and simply put them together in a big tin to bake. It worked out really well and then I coated with icing mixed with food coloring and used chocolate icing for the trousers.

I found it much easier to use liquorices for the outlines. For the eyes I used that edible paper you can buy for biscuit making and put white icing on them and then a Liquorices Allsorts and bits of black liquorices. The tie was a strawberry chew cut into the right shape. The shirt sleeves marshmallows and the arms and legs Maom chews that we have here in Germany. I used snickers for the shoes.

My daughter loved the cake.