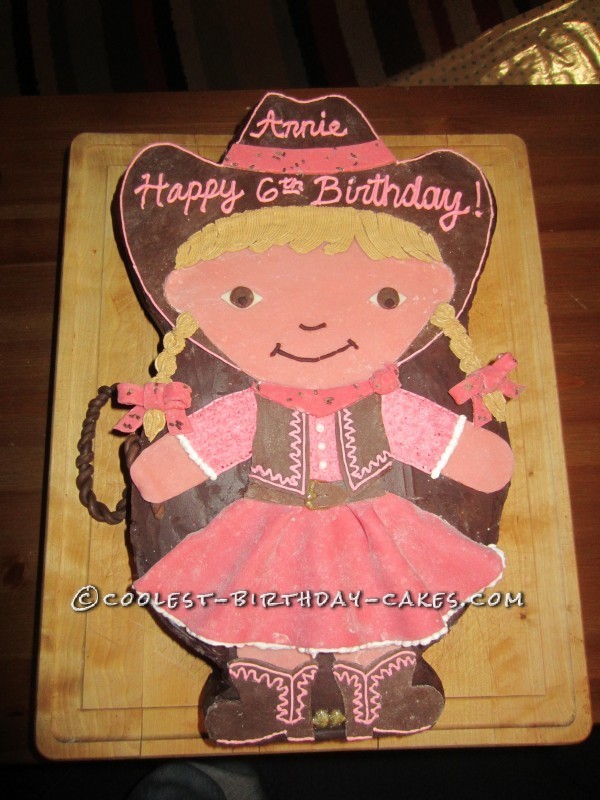 My friend asked me to make this cowgirl birthday cake for her daughter’s 6th birthday. Actually, she asks me to make a cake for her daughter’s birthday every year since I love doing it and she hates it. So, for her 6th birthday, her daughter had a cowgirl party and wanted a chocolate raspberry cake in the shape of… you guessed it, a cowgirl.  Finding very little cake inspiration online, I found a clip art cartoon that I liked and the cake blossomed from there!

I baked the cake in 2 9×13 cake pans. While the cake firmed up in the freezer (to ease cutting), I drew my cartoon cowgirl on a sheet of paper then enlarged it to make a template that was slightly longer than 13″, planning on using cake remnants to fill it out. I filled the cake with raspberry and laid the template on top to cut out the cowgirl shape. Using remnants from cutting around the hat and body, I constructed the bottom of the skirt and boots. Finally I spread some raspberry filling thinly over the top to help keep the cake moist once it was frosted. 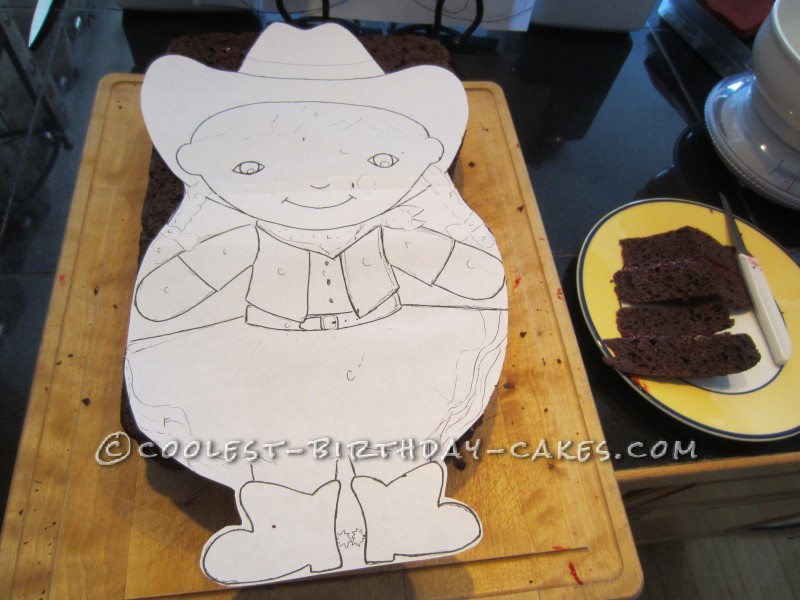 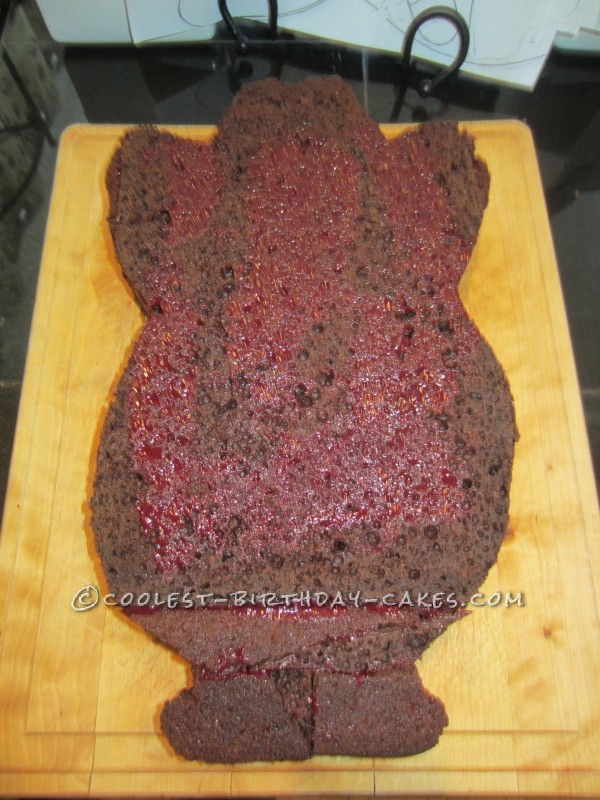 I used chocolate ganache to cover the cowgirl birthday cake and my 4 year-old helped spread it on.  The ganache hardened quickly as the cake was cold from the freezer, so we worked quickly!  The ganache made a nice smooth base for the decorating, and held together the remnants that made up the feet. 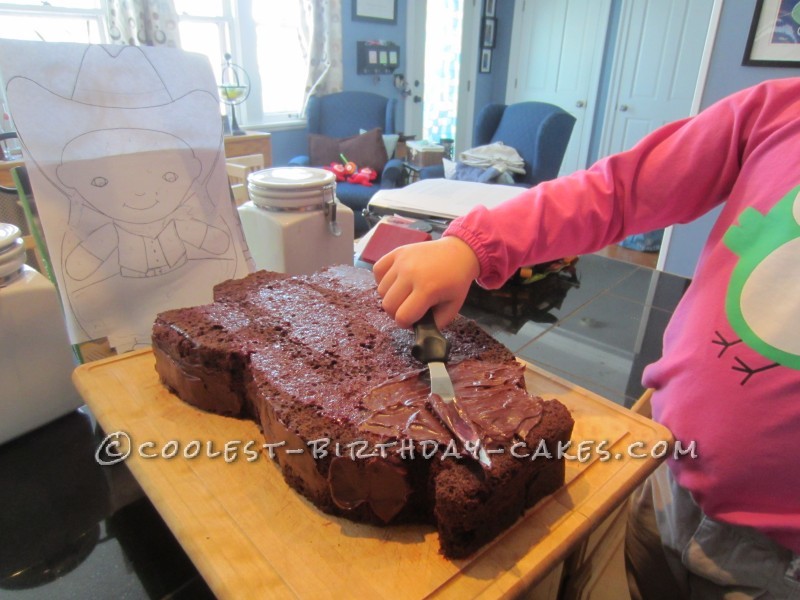 Frosting with my helper

My new favorite decorating tool is candy clay, which is like fondant but much yummier. Using 1 bag of white chocolate candy melts, microwave in 20 sec. increments (stopping to stir) until melted.  Add 1/3 cup light corn syrup, stir, then cover for at least 1 hour. I used pink, cocoa and white for this cake. Then, I cut apart the large template to make small templates for each piece, then cut the rolled out candy clay with small scissors and a pizza cutter. I started with the hat, then laid the face over the top. I then did the boots, legs and arms on the cowgirl birthday cake. For the eyes I used white and brown with a little dot of ganache for the pupil. 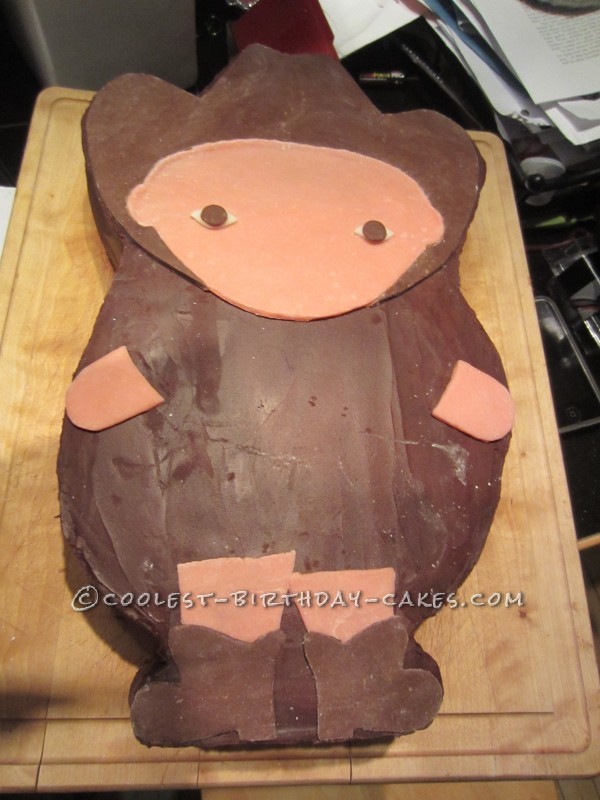 For the skirt, I tinted the pink a bit darker and rolled out a long half circle with the waist cut in. I pushed the sides together to the proper width and formed the ripples. Then, I let it set in the freezer for about 5 minutes to firm up. Next, I used my templates to cut out the vest and belt out of the brown. I cut a shorter belt piece to layer over the longer one and made a few holes across the middle.

Using a leftover tube of gold sparkly frosting from a previous cake, I piped the buckle and then spurs on the boots. I scattered some dark brown sprinkles on the remaining dark pink candy clay and used my rolling pin to press them in. Then, I cut out a ribbon to go on the hat and a bandanna  again using my template cut-outs for the shapes. I cut out a skinny strip and tied it in a knot for the side of the bandanna, then cut out 2 long skinny strips to made hair bows for the braids. 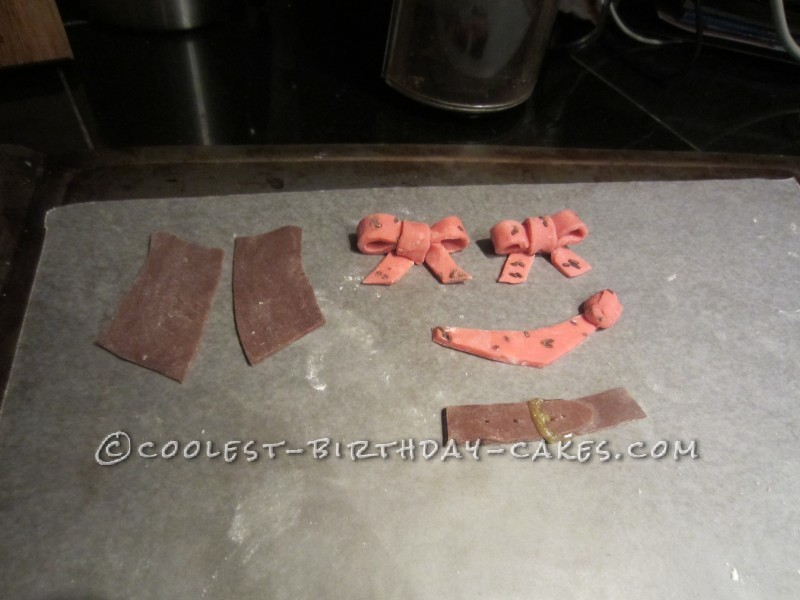 I used pink frosting to outline a shirt, then a star tip to fill it in. Then, I laid the vest and belt in place, then used a small plain tip to put detail on the vest and boots. I used white frosting with a larger opening plain tip for shirt buttons and to outline the end of the sleeves and the bottom of the skirt. I used ganache to pipe the nose and mouth, and then used a flat ridged tip with brownish/yellow frosting to pipe the bangs.

For the braids, I used a more open star tip and tried my best to mimic a braid look, then put the bows on toward the end of each braid. I put the bandanna and hat ribbon in place, then piped the words on the hat. Since I had lots of candy clay left over, I rolled out 2 long strips of brown and twirled them together to make a lasso in her right hand coming down the side of the cowgirl birthday cake and laying on the board. 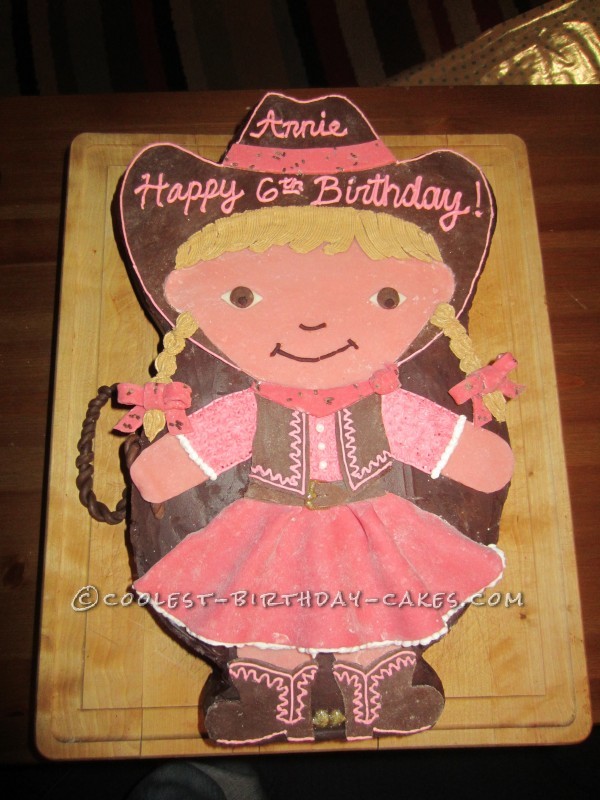 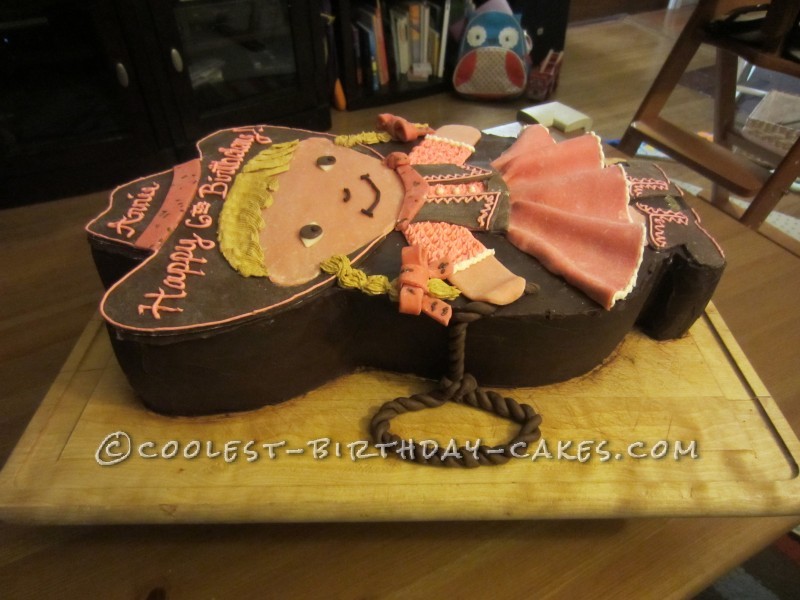 The cowgirl of honor was very excited about her cake. She brought each friend over to see it when they arrived at her party. Her mom made me cut it since she couldn’t bring herself to do it…by then I had looked at it long enough and had no problem cutting it apart. Once the kids were served, the adults at the party kept sneaking tastes and there was hardly any left at the end! 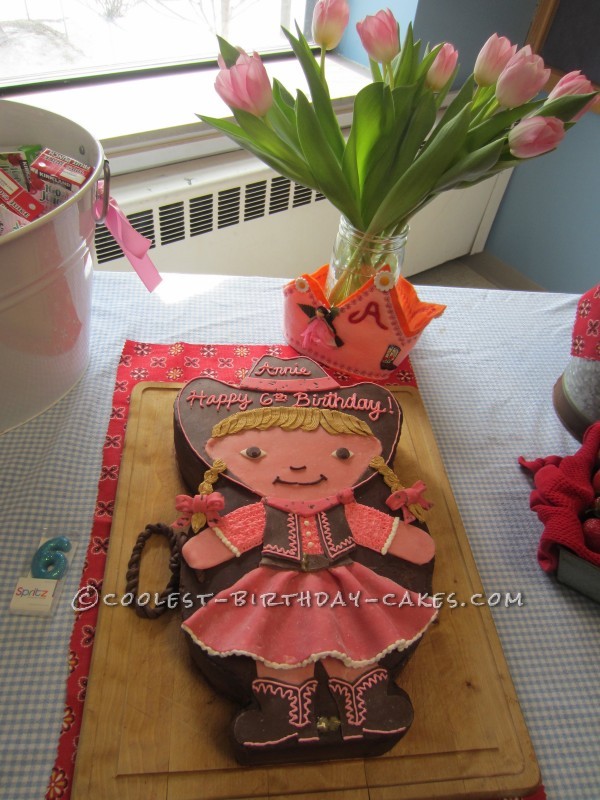