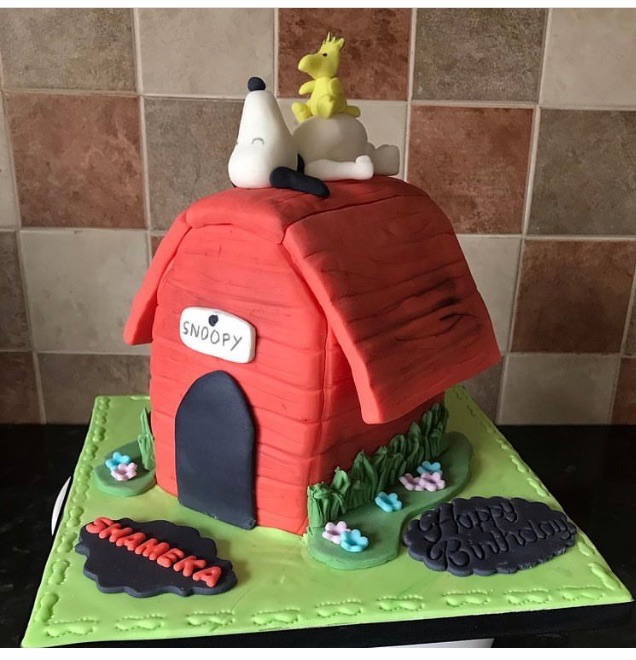 This cake was my first Snoopy cake made for a friend’s daughter who loves Snoopy. I covered a 12” cake board in green fondant and set aside to dry out.

For the cake, I baked 4 oblong cakes filled with buttercream and jam. Before crumb coating, I shaped the top for the roof and only after that I crumb coated. Then, I coloured some fondant red and covered the whole cake. Next, using my scribe tool, I drew on a wood design.

I cut out the shape for the roof. I cut a thin oblong for the centre top and two larger oblongs for the sides of roof. Then, I attached the top one but left the other two to dry out for about one hour before attaching to the cake. Next, I brushed black-edible dust over the kennel to make the wood effect stand out.

On each side of the cake I modeled the grass and added some flowers. Then I cut out a plaque and added a name. I added plaque with happy birthday written on it and attached to the cake board.

Now, to make Snoopy, I used white modeling paste. I shaped the head adding a black nose and ears. Next I made the body, legs and arms and attached them into place. Next, I made Woodstock out of yellow modeling paste.

The Snoopy cake was well received. I love it when I can make something I’ve never made before.

Did you know… Snoopy is a loyal, imaginative and good-natured beagle who is prone to imagining fantasy lives, in the comic strip Peanuts by Charles M. Schulz. Since his debut on October 4, 1950, Snoopy has become one of the most recognizable and iconic characters in the comic strip and is considered even more famous than Charlie Brown.