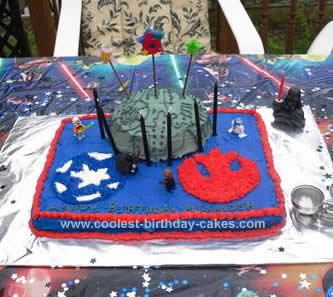 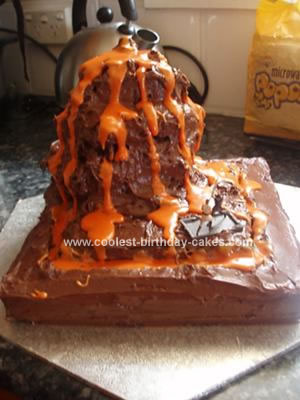 This Star Wars Lava Birthday Cake was a birthday cake for my 5 year old son. Very easy to make. I baked 1 square chocolate cake and one round. I cut the round cake into 3 uneven pieces to build as the mountain. I then cut a trough around the cake for the lava to … Read more 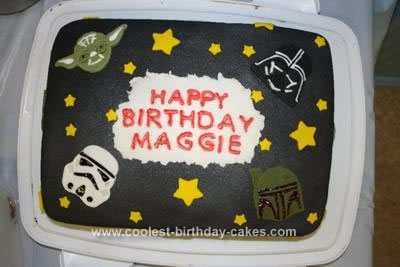 This Star Wars cake was for my daughter’s 4th birthday and it was the 2nd cake that I had made/decorated by myself. I actually got the idea when I saw the Star Wars cookie cutters in Williams Sonoma. What I used; * Box cake (2) * Frosting * Wilton’s Fondant – I bought white and … Read more 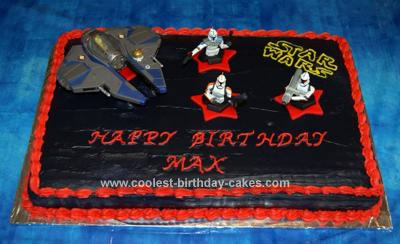 This Homemade Star Wars Birthday Cake is an 18×12 cake. It was easy to make due to using the figures on the top. The Storm toppers cost only $5 at the Toy R Us. The spaceship doubles as a cake topper and a gift. 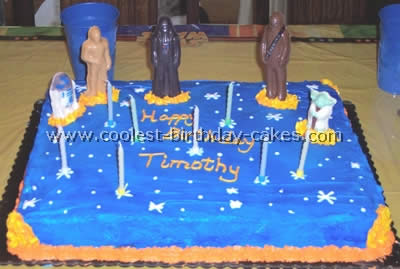 My husband and I collaborated on Star Wars cakes for my nephews seventh birthday party. A couple of days before the party I made the chocolate character molds. I found these on eBay or some similar site. They are used with the meltable chocolate discs found at most craft stores. You can color the white … Read more 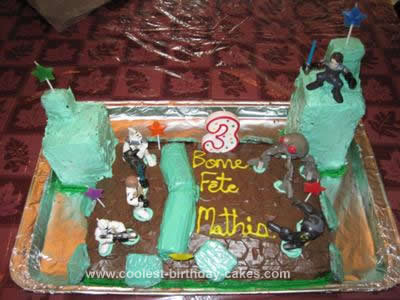 My son (and his step-father) are incredible fans of Star Wars the Clone Wars, so for his 3rd birthday I wanted to make a cake according to his likings. I searched on the net to find mostly too complicated cakes or just a picture printed on edible paper. I found one though that was a … Read more 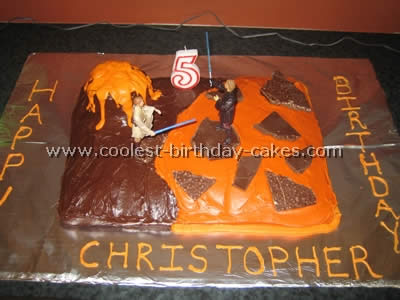 I frosted part of the rectangle cake with chocolate frosting from a can. I used canned white frosting colored with yellow and red gel coloring to make the orange lava. The pieces of “land” are created using broken pieces of Hershey bars. I created the volcano by stacking pieces of cake that I cut with … Read more