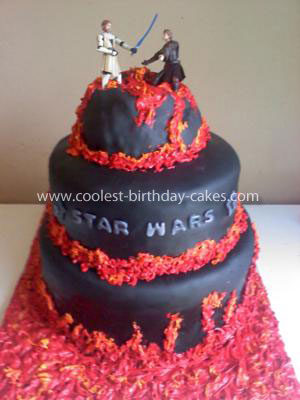 My sons love the Star Wars movies, so for their birthday I decided to make them the scene where the characters Obi Wan Kenobi and Anakin are fighting on top of a volcano. The idea came from looking at Google Birthday Cake images. I had a lot of fun making this Star Wars Cake.

How I made my cake:

The cake was made out of two 12” round cakes and two 10” round cakes. First I mixed two flavors cake boxes: chocolate and vanilla which I combined to make a marble cake. After they had cooled, I shaved off the tops of the cakes to make them even. I found out that if you freeze and wrap your cake in plastic wrap before crumb coating it the icing is easier to spread. For the filling, I used dark chocolate frosting between the layers; I also used “Wilton” fondant to decorate the cake. I colored my fondant with black food coloring gel; for the lava I used red and yellow food coloring. I rolled out my fondant with a thin layer of butter or you can also roll it out with vegetable shortening onto the rolling surface to help in prevent cracks in the fondant.

To decorate my cake applied the rolled out fondant on to the first tier and then I did the same for the second tier. Afterwards, I piped the lava, the flames, and then I added a little white on the black fondant to get the color gray for my letters. The letters were cut out with cookie letters cutters. The last step I did was to decorate the top of the volcano. I used “Rice Krispies” cereal mixed with marshmallows and a little butter and powdered sugar to form the top of the volcano and covered it with black fondant and red icing. Then I added the two characters on top.