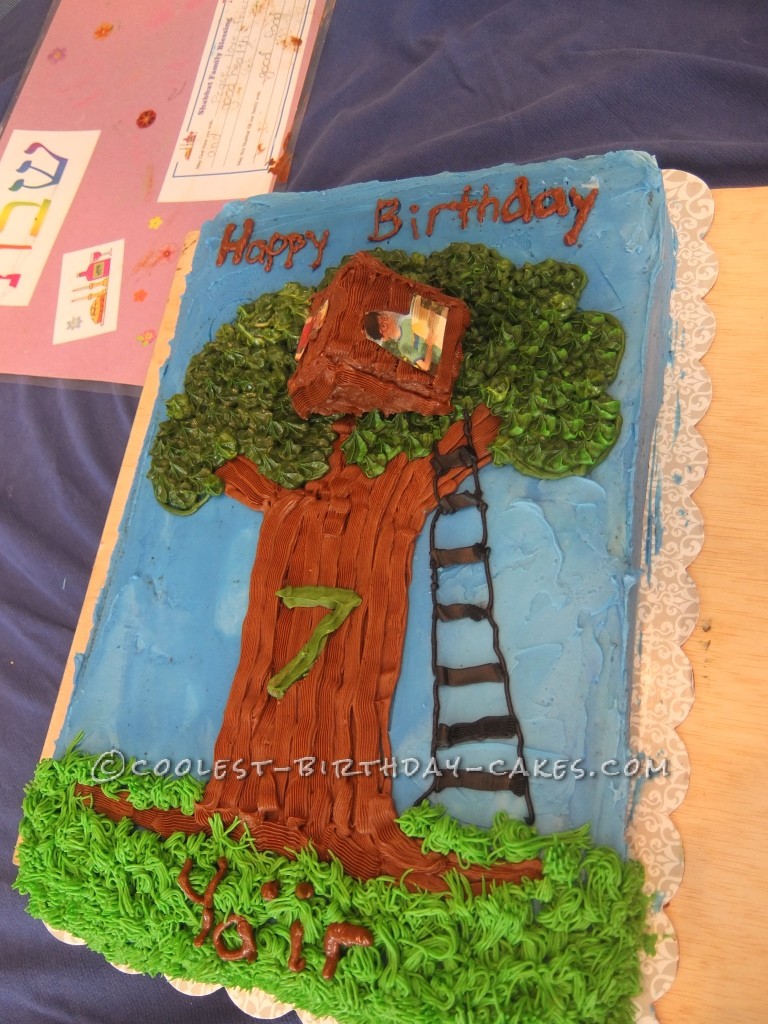 At first my son wanted a Ninjago party for his 7th birthday.  I wanted him to pick something less violent.  So we agreed on a Magic Tree House party because he loves the books.

He just finished reading Night of the New Magicians – my favorite so far.  The school librarian where I work helped me research possible party and cake ideas.  We had a dinosaur stomp.  We put soft toy dinosaurs from the Dollar Tree in balloons which the children broke open like eggs.  It was so hard getting those dinosaurs into the balloons.  We had a mummy race with pyramids that my husband built.  We also had a scavenger hunt for Magic Tree House books and a Fog Creek, Pennsylvania book which I made from a journal.  Finally we painted birdhouses.  Each child got a birdhouse and book as a party favor instead of a bag filled with candy and junk.

For the cake – I baked a large rectangular cake (12 x 18) using 3 box cake mixes.  After the cake was cool a little I leveled the cake.  Then I popped it out of the pan onto the cooking rake.  After it cooled completely, I place the cake on a Wilton board and then that on a sturdy wooden board because of the weight of the cake.  I freeze my cakes over night because I find it easier to frost them.  Make sure you wrap the cake in parchment paper or wax paper before freezing to protect the cake.

The day of the party I made 3 batches of frosting, using Wilton’s Buttercream recipe.

I made about 2 ½ – 3 cups of frosting sky blue with a little royal blue mixed in.  I frosted the entire cake blue and then let it chill in the refrigerator for about 30 min so the frosting would get firm.  With a tooth pick I sketched out the tree and words. For the tree trunk I took about 1 1/2 cups of frosting and added some Hershey’s Coco and brown food coloring.  I used a # 4 tip to outline the tree trunk in brown and then #48 to fill in the tree which gave the tree texture.  For the grass, I used leaf green frosting.  It was about 3 cups of frosting. I used tip #233 (grass and hair tip) for the grass.  I took the left over frosting and added Juniper green dye so that the leaves of the tree would be a different color than the grass.  I outlines the leaves in green using a #3 tip (it is the same tip as #4, but slightly smaller).  The leaves I used tip #106.  The rope ladder I cheated a little and used Wilton’s pre-made black that comes in a tube (like toothpaste).  I used tip # 3 for the vertical rope park and tip #47 for the horizontal rungs of the ladder.

To make the treehouse, I took one graham cracker square and carefully cut it in half at the diagonal to make two triangles.  Then I took 2 more graham cracker squares and frosted all of them brown with tip #48.  I put them on a plate in the refrigerator for 30 minutes so they could get hard.  While still on the plate, I then used more brown frosting to “glue” the pieces together to form the treehouse. I then used a little extra frosting to make sure that any finger prints or dents that happened during assembly got covered up.  I chilled it again for a few minutes and then carefully moved the treehouse to the cake.   I would recommend frosting a few extra graham crackers in case it does not work on the first try.  I printed a few pictures of Jack and Annie from the internet, cut them out and added them with a dab of frosting. 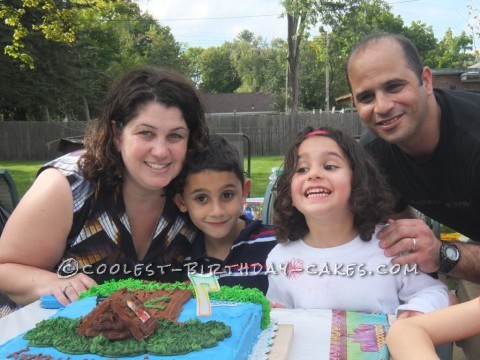 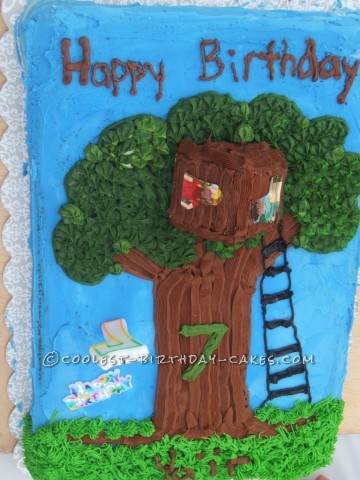 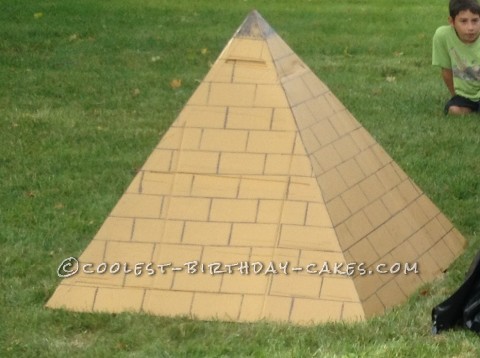 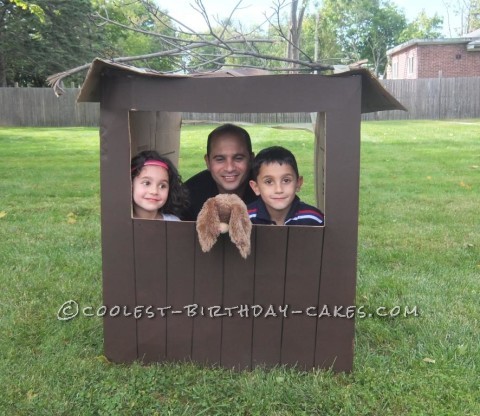