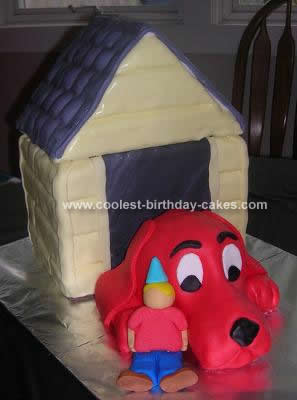 Then I cut 3″ squares (two or three) and stacked them on the 3″ strips for his head. I rounded his head and added some rice krispies in the front to shape where his head meets his nose. I used a tool to make creases in his paws and around his mouth. I covered his legs with fondant and then covered his head with fondant.

I used the same tool to make the same grooves in the fondant on his paws and head. I cut out fondant ovals for his eyes and added a black fondant nose. I sketched an ear shape and used it as a stencil to cut his ears out of red fondant.

I made my own fondant, marshmallow fondant, which was really easy to make. It did take a while, and a lot of no taste red gel, to get the fondant the right color of red. I put the roof in the refrigerator before I carved it. I sketched everything out on paper before I started and cut pieces out of the paper to use as stencils for Clifford. It took several hours to make, but my son was very happy with it! 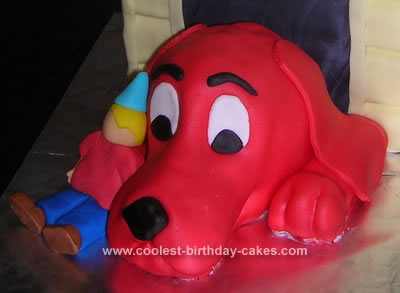