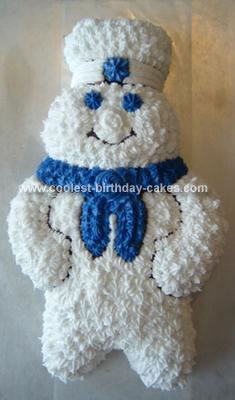 First I have to say that this was my VERY first time making a cake! My mom is a professional cake decorator. She’s made many wedding cakes. Over the years I’ve watched her decorate cakes and for her 52nd birthday I decided to give it a try to surprise her. :) So here are my step-by-step instructions on how to make the cake I made …..

I started off by buying a 1974 Wilton Pillsbury Doughboy cake pan mold on-line, which measures 14″X8″. I coated the inside of the doughboy cake can with “Crisco Spray, with Pillsbury Flour”. It was amazing! The cake never stuck.

I bought 1 box of Pillsbury Moist Supreme Devil’s Food cake mix and baked it according to the directions on the box. I let the cake cool completely.

Cut shortening into pieces in mixing bowl. Add powdered sugar and beat (you may want to place a towel around the bowl so powered sugar doesn’t go everywhere). Add butter and almond flavoring. While mixing, slowly add water. Mix well on high until creamy. NOTE: Keep the frosting covered with Saran Wrap while frosting the cake so that it won’t dry out.

After making the frosting I dipped out two small bowls of frosting. To these bowls I added the Wiltons food coloring. I bought all my cake decorating supplies at Wal-Mart. For the brown outline I bought Wiltons Brown Icing Color. For the doughboy blue color I bought Wiltons Royal Blue Icing Color. For the decorating part I bought a box of Wiltons 12 inch Disposable Decorating Bags. My cake icing tips were: for outlining in brown, a #5 Round tip / for starring in white and blue, a #21 Open Star tip. I also bought some couplers (to hold the tip unto the bags).

TIP: If you plan on decorating the cake the day before, I wouldn’t add the blue frosting until hours before the party because it will bleed blue coloring onto the white frosting. 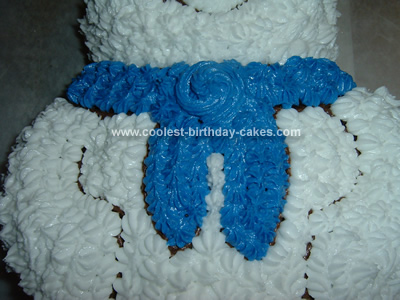 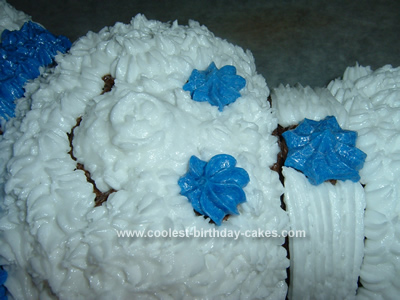