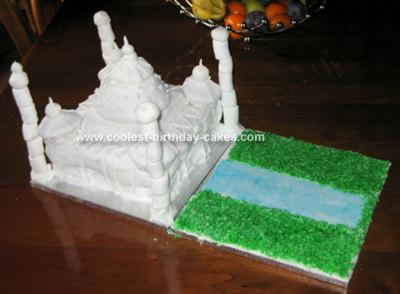 My boyfriend’s father had recently returned home from holidaying in India and was celebrating his 50th birthday. I thought it would be apt to try and attempt a Taj Mahal cake.

I baked 3 square cake tins (sponge cake), 5 fairy cakes as we as a dome sponge using a ceramic dish. I then let these cool.

I proceeded to put jam in between the three square cakes to keep them together and then covered it in white royal icing. I then placed a fair cake at each corner and covered with icing. I also rolled some icing into a ball for the decorative bit on top of the corners.

For the centre dome, I used the bowl and placed it upside down. I then added another fairy cake on top to add height and a few balls of icing. Again this was covered in icing as one cake on top so it just looked like one big dome.

The pillars around the edge were made with large skewers and white marshmallows (and again, icing balls on top).

After this had all set, I got a white piping/ icing pen and added some detail – any pattern really.

For the little river thing at the front, I dyed some coconut bits green for the grass and the river is a rolled out bit of white icing i had left, dabbed with blue food dye (using a tissue).

I was pretty pleased with the result as I’m only 19 and haven’t had much experience with decorating (which is why it is a lot cruder than i would have liked). Certainly beat a normal cake though!