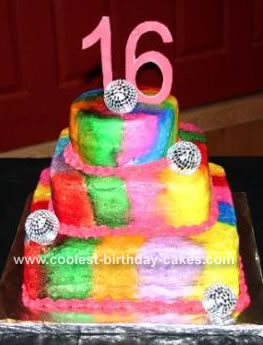 My daughter began planning her Sweet 16 party months in advance. She decided that a disco/70’s theme would be fun, especially since she and her friends love to dance. We talked about whether or not to do a more traditional “Sweet Sixteen” cake, but she wanted something fun that her friends would really like. We finally determined that a tie-dye cake would be just the thing! We had about 100 teens coming so I knew it needed to be large.

Several days in advance, I made a mixture of fondant and gum paste, and used stencils I had made to cut out the number 16. I used bright pink coloring to tint the mix, and allowed the numbers to dry for about four days. Once we arrived at the party site, I assembled the cake, piped a bright pink shell border around the base of each tier, and placed the numbers on top (I used royal icing to attach sucker sticks to the back of the numbers, which served as “picks” to stick down into the cake). I went online and found some small (4″) disco balls. I randomly placed them on the cake for some added sparkle.

My daughter and her best friend (they had their party together) loved it, and the kids at the party thought it was the “coolest”!