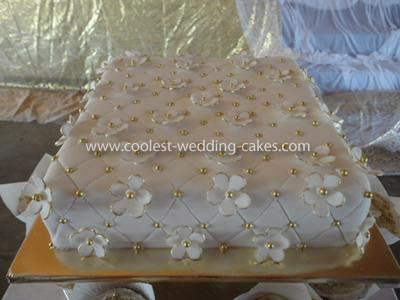 This was the first wedding cake I’ve ever made! it was made for a dear cousin whose request was “simple and no colour”. Her wedding colours were white and gold . The cupcakes were red velvet, and although I would’ve liked a traditional cream cheese frosting, this wouldn’t have been practical because of refrigeration, so instead I made a white butter cream whipped icing.

Each cupcake had to be frosted and decorated immediately as the frosting hardened quickly. I decorated the cupcakes with different sized gold balls and a simple flower which I cut out myself and dried on the back of a plastic egg tray, and edged them in gold dust (mixed with veg oil to make a paint ). I placed a gold bead in the center of each flower and fixed it with royal icing.

The cake was a vanilla sponge, covered in white fondant (with a dirty icing underneath), while the fondant was still wet, I used a tracing wheel (dressmakers?) to create the quilt effect. I have never attempted this before, so it’s not perfect but I measured very carefully and did the best I could. I dotted gold balls and flowers where the diamonds meet and fixed them with royal icing.

Gold covered cake board and pretty cupcake holders (which only held the cupcakes, I didn’t bake in them!) Also I added the gold ribbon to each cupcake holder. It added a bit of bling to a simple cake. 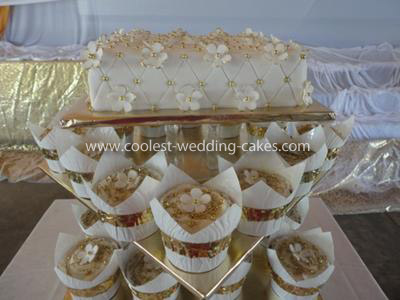 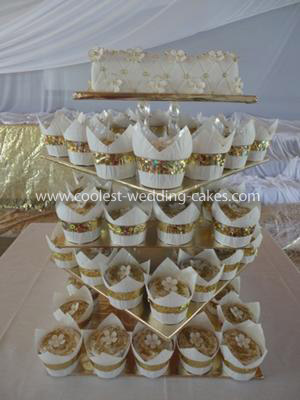 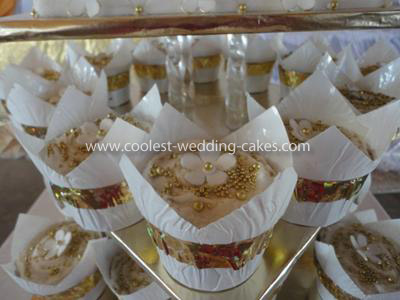