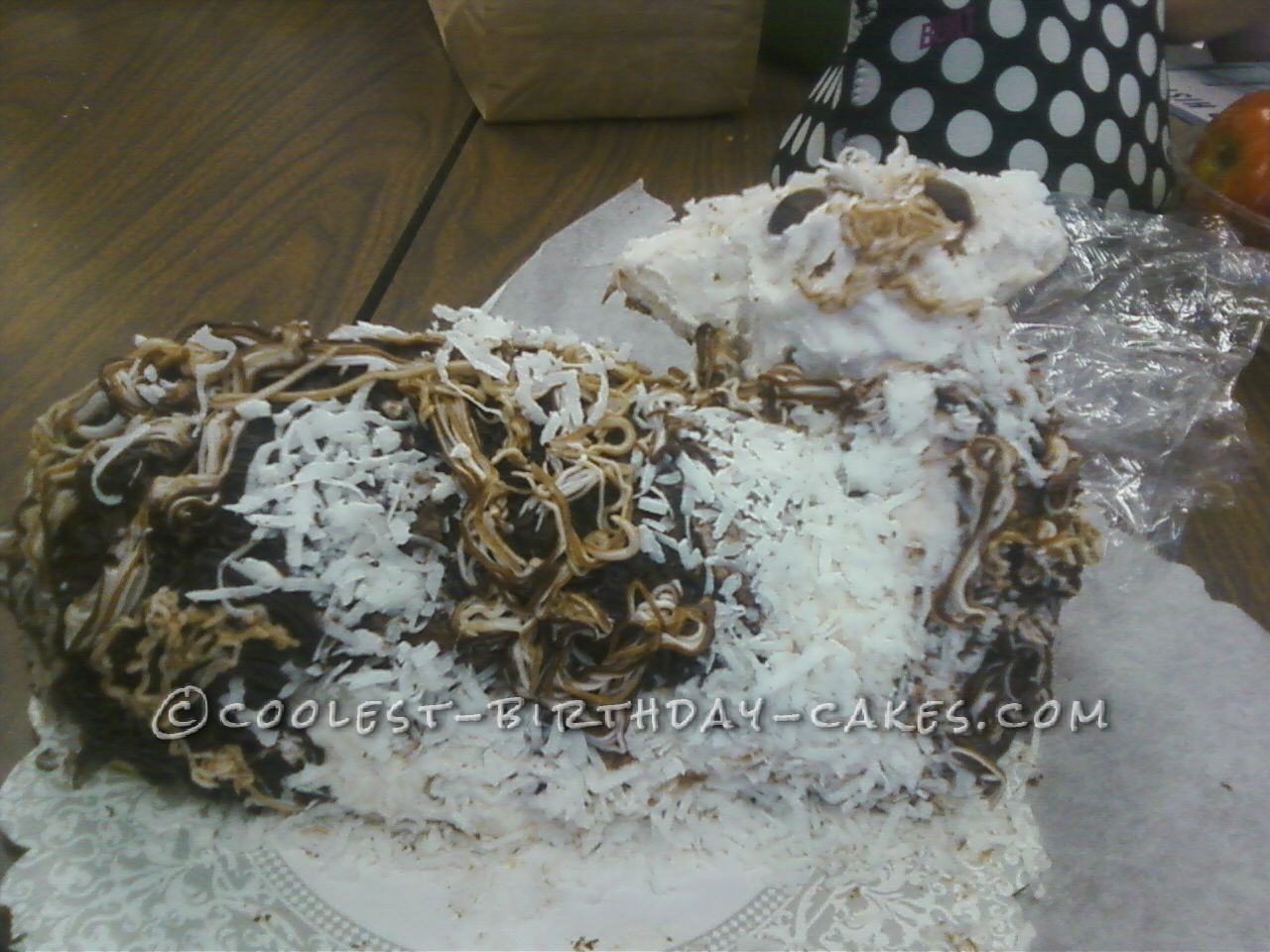 This tale begins with my best friend’s birthday last year. She was turning sixteen and I just knew I had to do something special to mark the occasion! Earlier in the year I had perused my interest in cake decorating by enrolling in several Wilton cake decorating classes at the local Michaels store, and by the time of her birthday my cake decorating skills were off the charts! (or so I thought). That Christmas, my aunt had sent me a 3D lamb cake pan to try out, and it just so happened that my friend’s favorite animal was a llama.

These two facts seem completely unrelated, but I found that llamas look relatively similar to lambs, which led me to the magnificent idea of creating a llama cake from the lamb cake pan for my friend’s birthday. It was almost sad how excited I was about making this cake; I had daydreams about how everyone at lunch would be so amazed once I revealed it, oohing and ahhing at a cake that should have been displayed in a museum instead of eaten. So, as you can imagine, when the time came to actually make it, I was beside myself with excitement.

I made the cake batter to perfection, or as much as you can with a box mix (I was under a time crunch!) Now, as I prepared the cake pans and placed the batter inside, it occurred to me that my aunt had sent no directions along with the pans, and I realized that I had absolutely no idea what I was actually doing. Instead of being worried, I shrugged it off with a laugh; how badly can one really mess up baking a cake? So I threw her in the oven at 350 degrees and set the timber for 25 minutes.

I could barely contain my excitement as I waited for that cake to bake, and finally when the oven timer went off, I grabbed the pans and threw them on the counter, hoping the cake would cool off as fast as possible so I could start the decorating process. After about fifteen minutes went by, I could wait no longer and I went to remove the top pan. What I looked down at made my heart sink and brought a crocodile tear to my eye. For some reason it had not occurred to me that the cake would need to bake longer than normal since it was not in two circular pans. What sat in front of me was a half-baked mess, goopy in some places, soupy in others, and spongy towards the outside. I had ruined it! What was I going to do!

I told myself to calm down and to think logically. Then it came to me! Obviously I just had to stick the cake back into the oven and let it bake the rest of the way! By this time at least thirty minutes had passed, and once I told my mom what happened, she was surprised the cake came back out of the oven as nice as it did; but it did come out! I stuck that sucker back in for another thirty to forty minutes, and when I flipped it out of the pans after it had cooled, it came out beautifully! Well, it was slightly lopsided and had trouble staying upright, but beauty is in the eye of the beholder, and this beholder was happy that the cake had made it out alive!

I then started the task of decorating the cake. I covered the cake with a crumb coating of vanilla frosting, gently smoothing it across the surface. Unfortunately, due to the leaning of the cake, it was quite difficult to frost thoroughly, and ever so slowly, the cake started tipping farther and farther. To counteract this issue, I just kept layering frosting on the front, so the weight evened out and the cake was able to stand once more. Crisis averted! Or so I thought. In order to give the llama a realistic look, I tinted vanilla frosting several shades of brown and put it in a piping bag with a tip to make the frosting look like hair.

I ever so slowly worked my way down from the head to the body of the llama until suddenly I realized that my frosting must have been too thick and dry because chunks of “hair” were falling off everywhere. And it kept falling. And falling. I was in a tizzy! I tried to pipe more and more hair onto the beast to keep up with the shedding! All the while, the cake kept getting heavier and heavier due to the large randomly frosted sections. Slowly chunks of the cake started breaking off! I had to grab extra icing to hold everything together! Yet, after some careful gluing back together, I finally had everything under control. The llama looked a little messy and not at all like the masterpiece I had envisioned, but at least it had hair and was in one piece. But then it happened.

As I was admiring my new found cake saving skills, the head slowly started leaning, and before I could even react, the head plopped off and rolled down the counter. I stood there frozen in shock and sadness. The llama had officially died! Yet I did not let this little inconvenience shake me. I grabbed the head and some BBQ skewers, and stuck it right back on! I had to cut the skewer in order for the cake to resemble a llama and not a unicorn, but I congratulated myself on the quick thinking. By this time my sister had come downstairs to the kitchen and was watching my progress with the cake unfold. Suddenly her eyes grew wide and she motioned for more skewers, pointing to the back of the cake. I turned it around, and somehow, without my noticing, the backside of the llama was coming apart in huge pieces, the inside of the cake spilling out everywhere.

At this point I was thoroughly angry at the cake; it had not gone at all like I had planned and I was very tempted to take it and throw it at the window. As I stood steaming, glaring at the mess in front of me, my sister was eventually able to calm me down and convinced me to try and salvage the poor beast. That way I would at least have something to show for all my hard work, no matter how embarrassing it looked. So for twenty minutes we stuffed that cake full of toothpicks and skewers, piecing it back together little by little. Eventually after a lot of hard work, the cake was able to stand once more on it’s own. I was still angry at the darned thing though, and I was convinced it was the ugliest cake I had ever laid eyes on. How could one of my creations turned out like THAT?

But I had to follow it through to the finish, so as a last attempt to salvage it, I added some shredded coconut to add a more hair like texture and two chocolate chip eyes. Then I stepped back a just stared at my work. The little chocolate chip eyes stared back at me, and suddenly, I was overcome with the fact that even though the cake was not at all how I expected it to turn out, it was actually cute, in the way that really ugly things can be really cute at the same time. Slightly more pleased with myself and by the fact that the cake wasn’t a total failure, I stuck it in the fridge with some plastic wrap over it, ready to bring to school with me the next day.

Earlier that day I had recited to my friends the tale of the impossible cake, reciting every detail in all it’s glory, so when I unveiled it at the lunch table, I was surprised when many of them still let out oohs and ahhs towards it, especially the friend who it was for; she was absolutely in love with it! Also, despite the fact that the cake had been baked twice and was stuffed with so many toothpicks it was like picking out bones while eating fish, it was actually one of the moistest and tasty cakes I’ve eaten! All in all, even though it definitely did not deserve to be in a museum like I had imagined, it tasted great and created a great memory; to this day I still joke about it with my best friend, always referring to it as THE llama cake.

For the “icing on the cake,” the only picture I have of it is a picture taken with my cell phone in my school’s cafeteria. All in all, this cake may have been a disaster to make, but it will go down in history with my friends as being one of the best cakes ever!