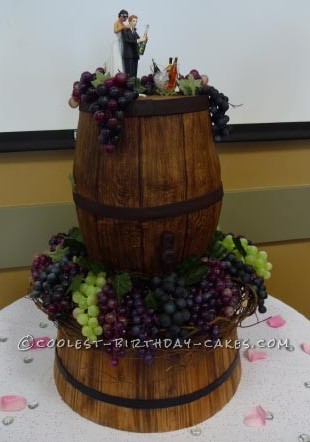 My son and his fiance asked me to make their vineyard wedding cake with only two stipulations. It had to be carrot cake and a non-traditional design.

Since their wedding was going to be at a vineyard resort, I couldn’t resist using the wine theme to create a wine barrel – good enough to eat! That’s when the fun began – designing and building.

Since the wedding was at least a 10 hour trip away by car, and we would be staying in a resort once there, I needed to do as much as possible in advance, but planned to do the assembly and decorating on site. So, I…

…planning every detail so I wasn’t caught short in the middle of a vineyard, far from the nearest supplier.

A neighbour loaned me a very small freezer (about 2 cu ft) and my dear partner put an inverter in his truck so the cakes would stay frozen on the long trip (including an overnight stop).

Upon arrival at the resort and settling in our suite (with a fair sized kitchen), I began assembling the layers. I placed one of the angel food cake shapes flared edge up on a cake board on a turntable, inserted four pre-cut dowels and then placed the three large rounds (with boards/dowels), ending with the second angel food cake shape, flared edge down. This formed a rough barrel shape of about 16 inches tall and 10.5 inches at the widest part. Because the layers were still frozen, I was able to quite easily refine the shape, fill in the gaps with icing and crumb coat the whole thing.

I used a cream cheese icing with white chocolate rather than icing sugar for the filling and crumb coat to give a nice taste and texture and I coloured it a tan shade to approximate the base color of a barrel. I then returned the assembled cake to the fridge to set up the crumb coat and proceeded to mix the crusting cream cheese buttercream icing.

I used a brown color mix (equal parts green and red) and slowly added a bit of yellow to make it match the base colour of the outdoor plant pot I brought along that looks like a barrel (snitched it from the bride & groom’s backyard and washed thoroughly). I made lots of icing so there was no fear of running out before I was done and put on a thick coating, smoothing out any imperfections to a perfect barrel shape. Then, back in the fridge it went to firm up.

In the meantime, I rolled out chocolate fondant using my 9″ Wilton rolling pin for the barrel straps. I colored ivory fondant green for various sizes of grape leaves and my partner made a chocolate fondant spigot for the barrel, molding it around a chopstick to easily slide into the cake and using toothpicks to attach the spout and turn screw.

We then brought out the cake again (thank goodness for Hero Partner’s muscles and steadiness!) and I smoothed the entire cake using a paper towel that left a homogeneous faint texture. Then I used the coolest tool ever – a  6″ x 8″ texture mat “deep tree bark” – that I got from CakeMischief.com. I carefully pressed it on the crusted icing so that it matched up well and then pressed a long skewer vertically against the cake at about 3″ intervals to define the “staves”. I was going to airbrush a darker brown but it would have been my first airbrush attempt (yikes!) so I experimented on a spare cake board covered in icing and determined that the crusted icing would allow me to use a soft bristled brush and a brown coloring, thinned with vodka. It worked perfectly!

I painted the vertical lines first to define the depth and then lightly brushed, along the grain, the rest. I could blot up any parts that went on too heavy with a paper towel and just kept painting until it looked like a wine barrel. Applying unevenly was key so that the color variations of the “wood” looked authentic.

I carefully measured placement and used icing as glue to attach the straps top, bottom and middle. Toothpicks were used to hold the straps in place until the glue dried.

We loaded the cake and additional decorations on a hotel luggage cart which had bigger wheels than a kitchen trolley so it moved more smoothly. In abject terror we gently trekked in, through and over corridors, elevators, sidewalks, ramps, curbs, parking lots and door treads to the final resting place in the reception room. Everyone we passed looked at us moving so cautiously as if we were nuts but we didn’t figure out until later it was because no one realized it was a cake – they thought it was a wine barrel!

Once the cake was situated on top of the upturned planter, we placed it (on its turntable) in the center of a grape vine wreath that we adorned with several varieties of grapes. We poked the spigot (on the chopstick) into the appropriate location, surrounded the bride, groom and wine bucket toppers with fondant grape leaves and grapes… finally stepping away.

It was a kick having resort staff file in one after the other as word got out that they had to see this wedding cake. There were a few guests who refused to believe it was cake until the bride and groom cut into it for serving. Seeing the Bride and Groom’s reaction was the best result ever. 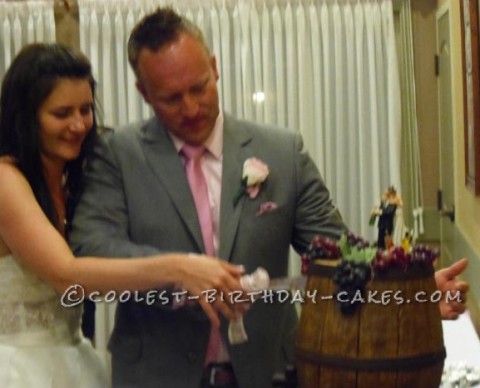 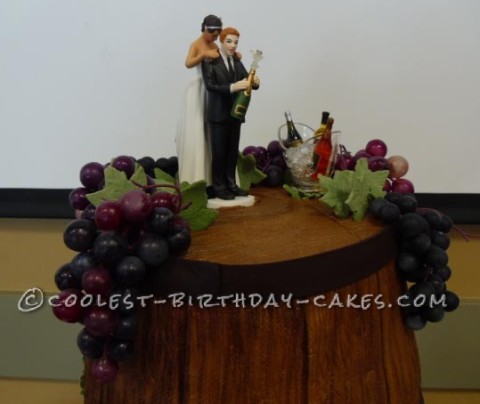 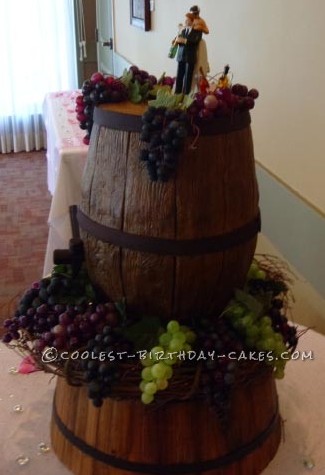 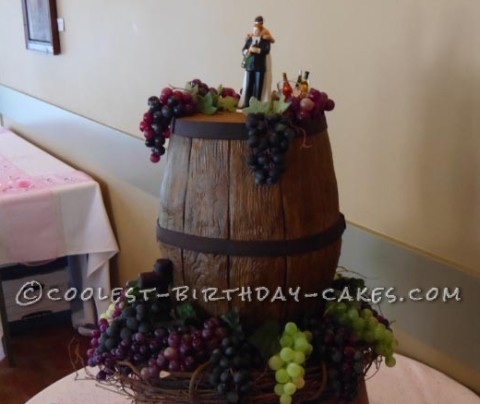