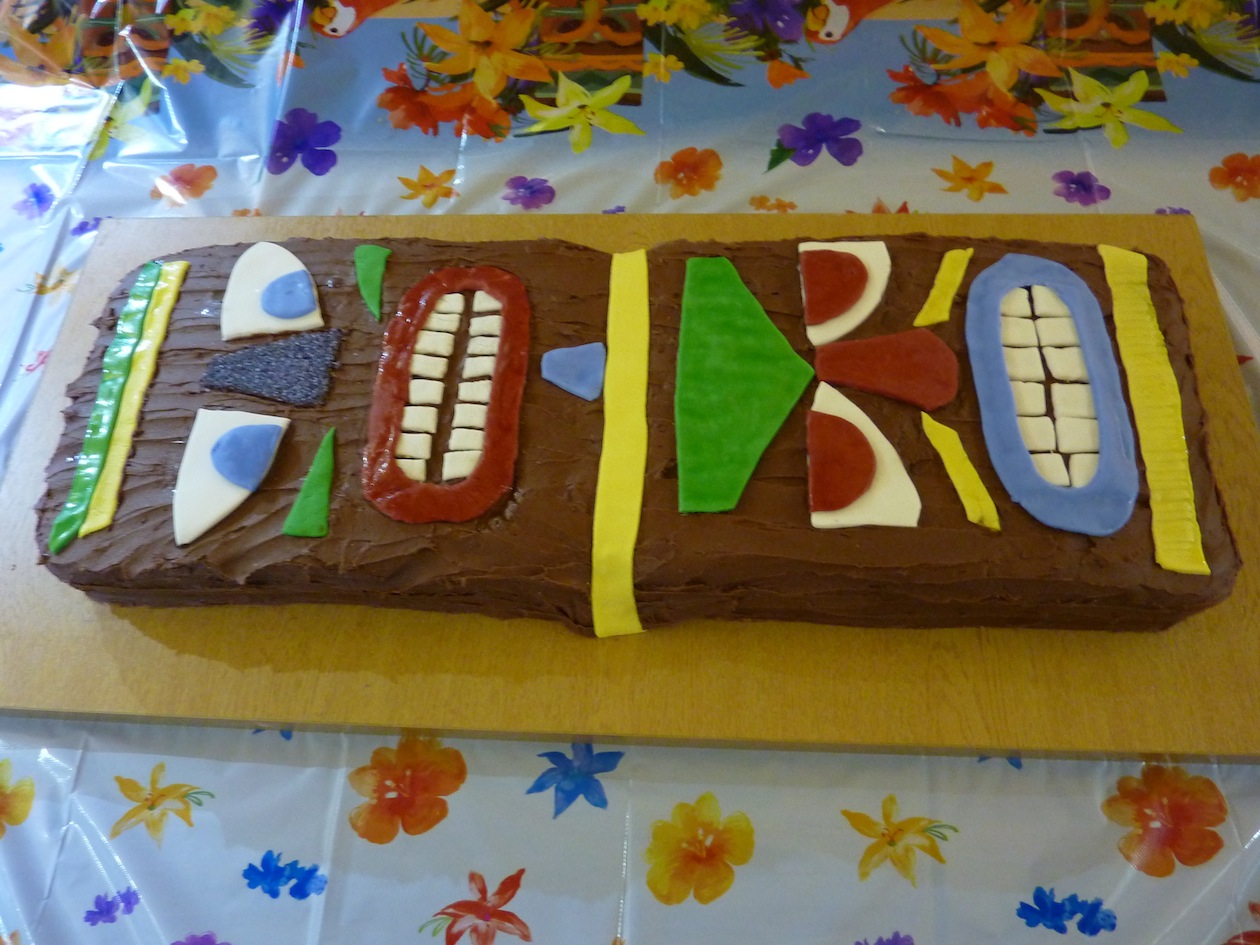 My daughter’s 21st birthday party was on Saturday 9th March. The idea for a cake was hatched mid-week of that week! So dived into Google and YouTube as had never decorated a cake with fondant icing before!!!! Eek. I am used to dress-making and knitting complicated patterns, so how much more difficult could it be?

I was just going to do one large Tiki face and so cooked 4 times the usual Victoria sandwich mix and put into a 14 x 10” deep pan – put it in for 35 mins on only about 160 degrees but gee it wouldn’t cook thro, so lowered the temp a little and kept checking back every 10 mins – finally took 70 mins to be cooked in the middle! It was a little darker on the outside than I would have liked and a little worried as wasn’t going to have the time to make a ‘test’ cake – what if it tasted horrid! Forgot to mention – with the sheer weight of the mixture, one side of the mixer driving a blade conked out so I carried on with just one!

My daughter then announced that she wanted 2 faces on the Tiki totum!!! So mixed up another batch (on only one beater blade running…) but this time I reduced the temp to 150 and it was done in 60 mins, testing it after 50 – came out not such a dark gold on the outside.

I then mixed 1 kg of hot milk chocolate icing, leaving out 2 tablespoons of cocoa as wanted it more a wood color than dark choc color but once rough-iced (to look like bark) it was a shade too dark and not quite enough icing to cover so as not to see the sponge below.

So made another 1 kg batch with another tablespoon of icing and it was perfect color – and get this! The other side of the mixer broke, so just as I finished mixing all that darker brown icing, I had no mixer at all – what luck!

Mistake 2 (first was not realizing how long a big cake would take to cook) was that I didn’t trim the cake so there was a dip between the 2 cakes where they abutted. Of course, the icing was being pulled by gravity into the dip L….. As it set, I would try and push the encroaching brown icing ‘glacier’ back up!

We hadn’t managed to get any fondant icing the day before (Friday 8th) and I had only finished cooking the 2 cakes that evening (8th), I was starting to panic now as the party was 7 pm the next day! My daughter, Meg, went out with my 10 yo son Robbie and got the fondant icing and some colors and I was doing the milk choc icing – all on the morning of the party. We all did a bit of fondant coloring  Meg yellow, Robbie blue and me green – oooo what a mess. We used disposable gloves and freezer snap-bags to try to manipulate the colors into the white fondant so as not to end up at the party with wild-colored hands! and was supposed to be decorating the badminton-sized hall walls with Hawaiian-themed room rolls we had bought off eBay – that was from 2 pm! I also had farm stuff to get done, so was on the farm from 3 pm for an hour and a half, the panic was really rising that my daughter would not have a cake at her 21st!!!

I left the children at the hall down the road from our home at 2 pm to go back to continue rolling out and cutting out Tiki face shapes. I sieved icing sugar to help it not stick. Red was the last I colored and that would NOT work in without sticking to everything! It was a nice rich color but so wet. The corner of my kitchen where I was working had a fine mist of sieved icing sugar over it! I had drawn the Tiki faces on A4 sheets of paper so had a rough guide to work to.

I would dip the end of a teaspoon in hot water and melt/smooth the area that the face marking was going, as the rough-bark was of course, rough! This would also make the fondant stick. I had made the lower face look as if he had a weight sitting on his head J. My daughter’s favorite color is purple and the only purple we had was cake glitter, so she filled the upper Tiki face’s nose with it.

One problem I had encountered is that, I could not really see the overall face from my seated position (wheelchair), so some of the symmetry was guess work and peering as far as I could. When nearly finished, I took an aerial-shot with my camera and then realized one of the eyebrows was offset but too late to change it!

The cake here had just one piece to go, a yellow band across the middle to help hide the middle-parting (smiley face).

The cake was finally finished about 5 and my daughter’s boyfriend shot up from the hall to collect – but I was still in my icing-covered jeans and t-shirt! My poor daughter and her friends had been left to decorate the hall without me giving the directions for what was bought to go there – that was all in my head, plus they had been left to prep the food!

I finally got to the hall at 6.30, only half an hour before the guests were due to arrive! But the cake looked super on a table covered with a Tiki-theme table cloth.

And even better – it looked super with lit candles all around the perimeter of the big piece of wooden shelf I had used as a base and even, even better – tasted lovely and everyone thought it was an amazing piece of work.

All I can say is PHEW! And

I am going to start sooner on my son’s cake for his pirate birthday party only 2 weeks after my daughter’s! I am also going to invest in some more tools for cutting out fondant decorations and watch more You Tube….. 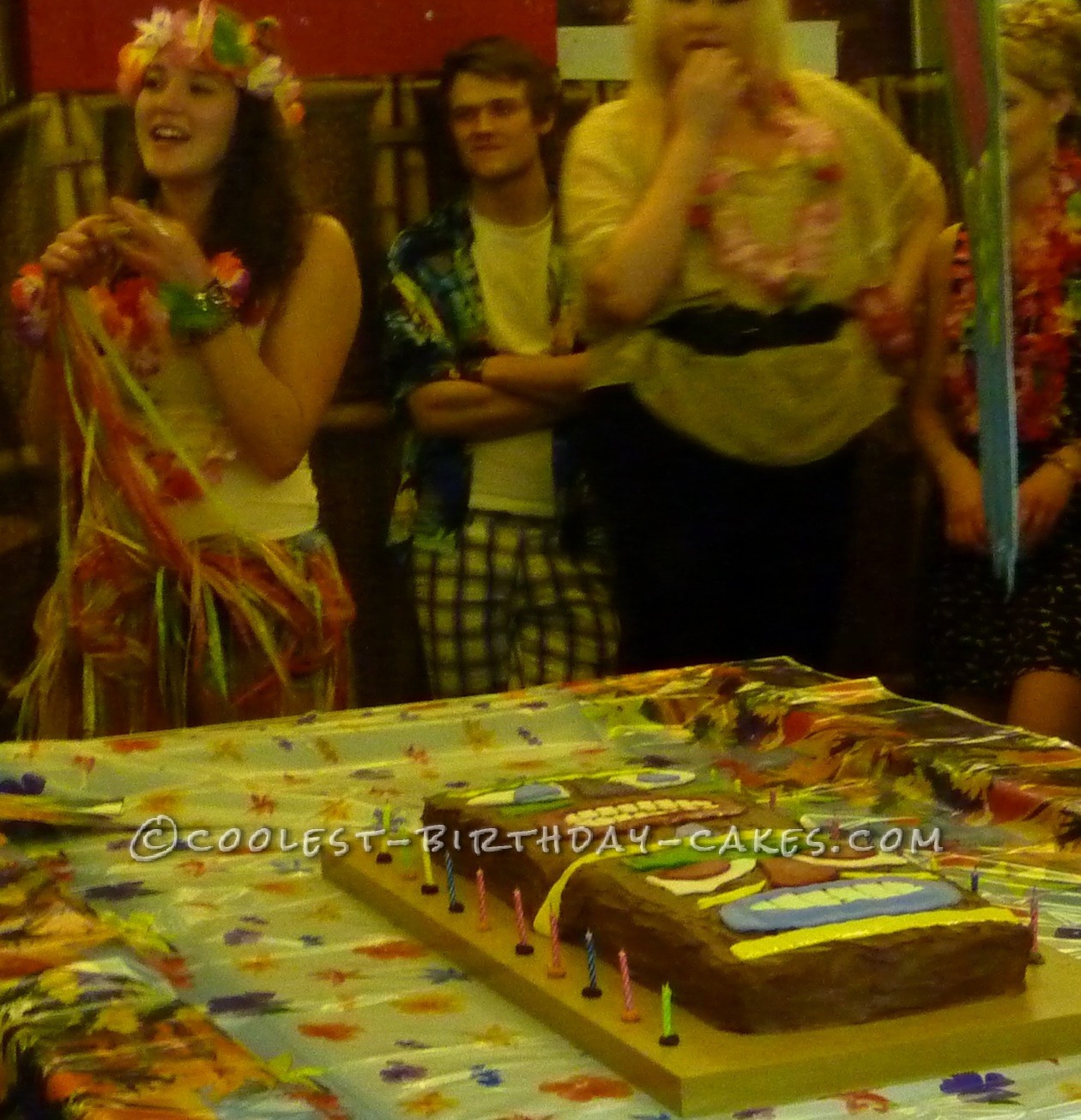 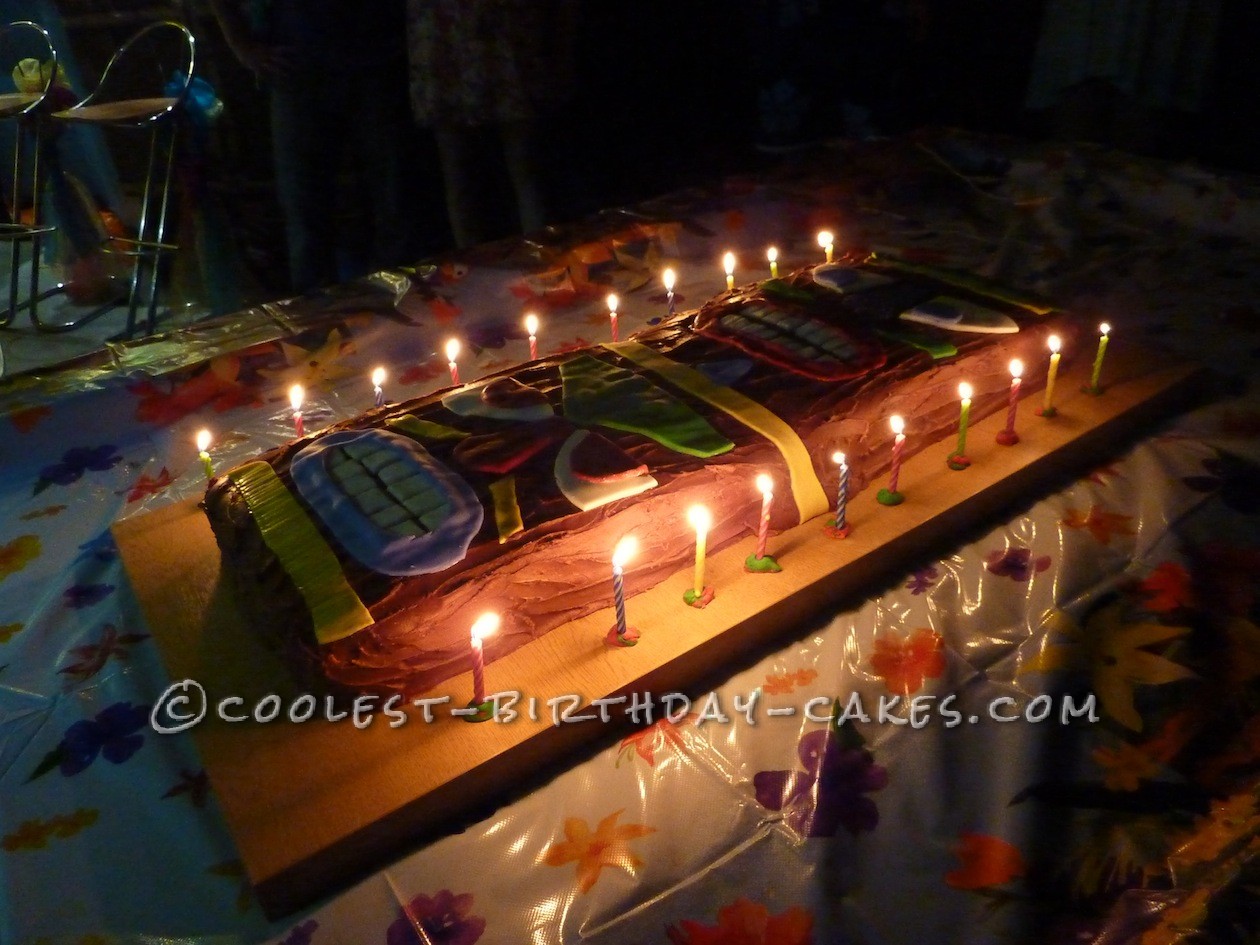 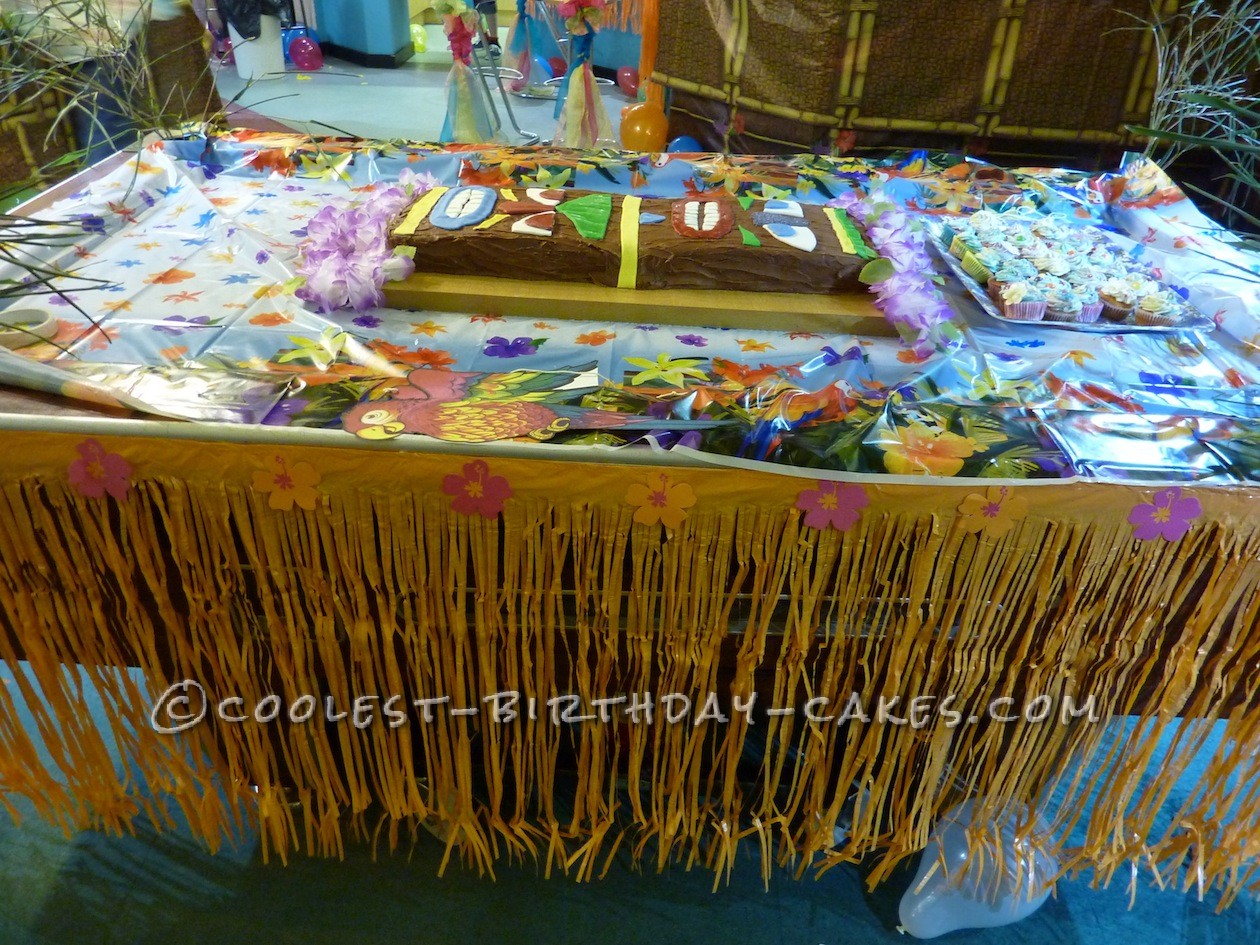 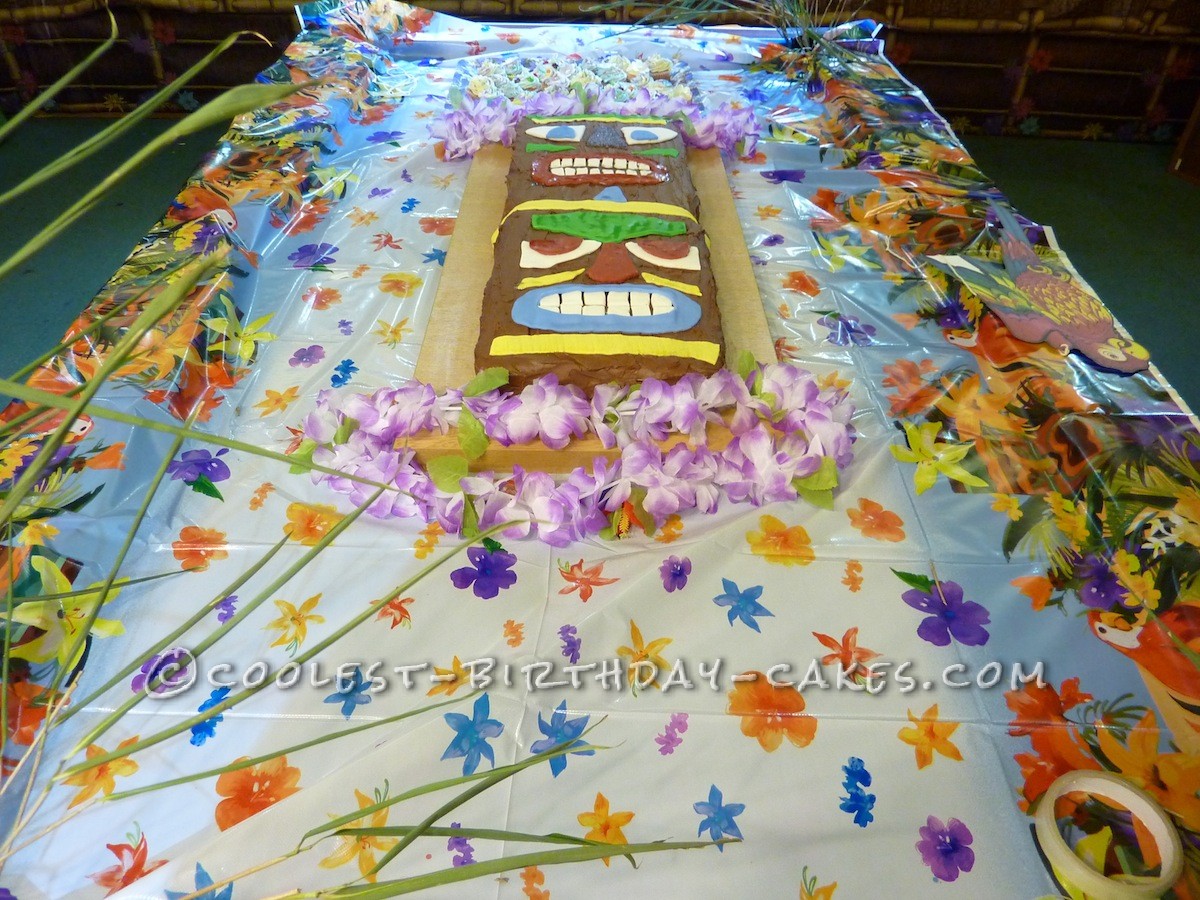 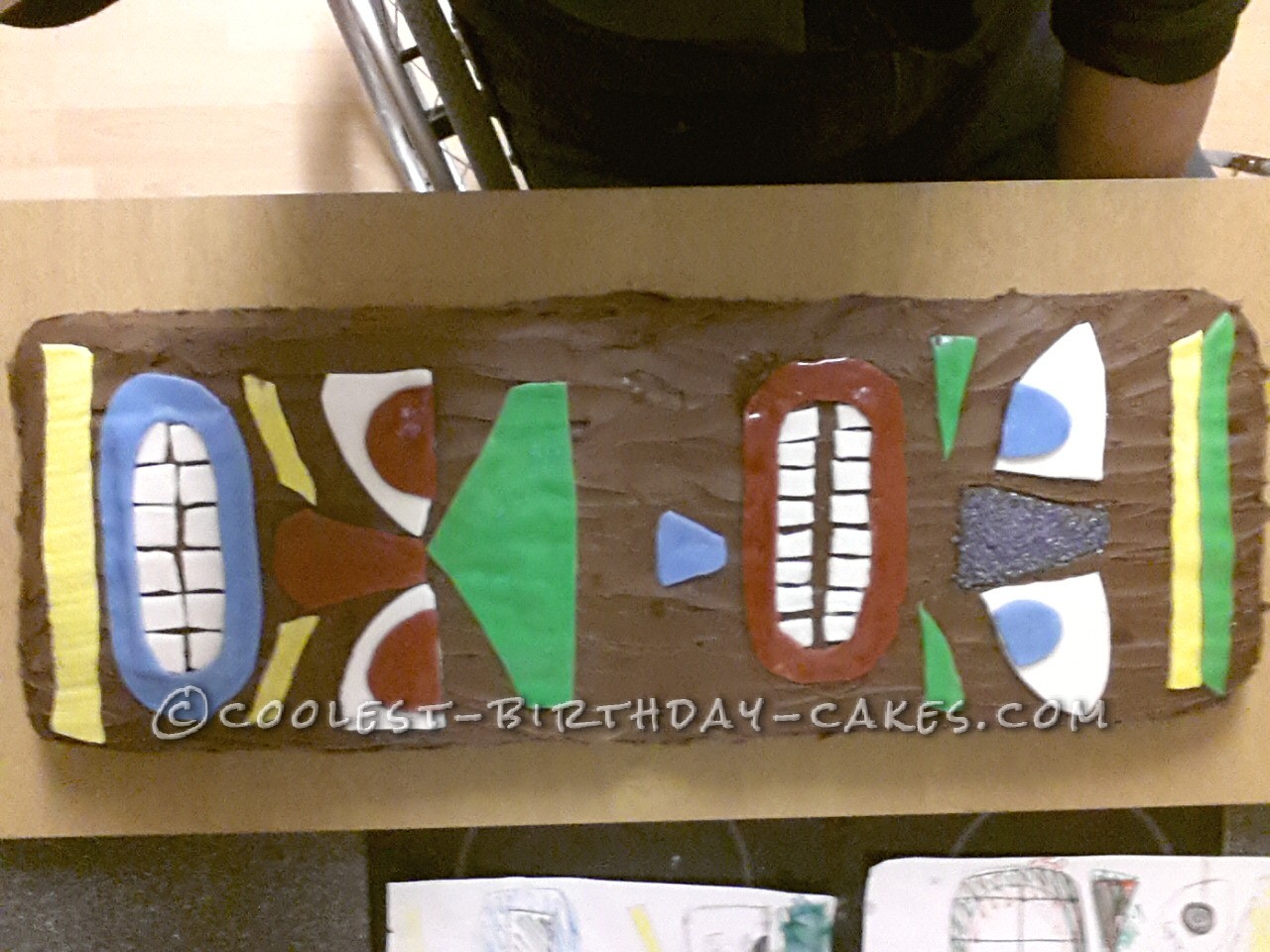 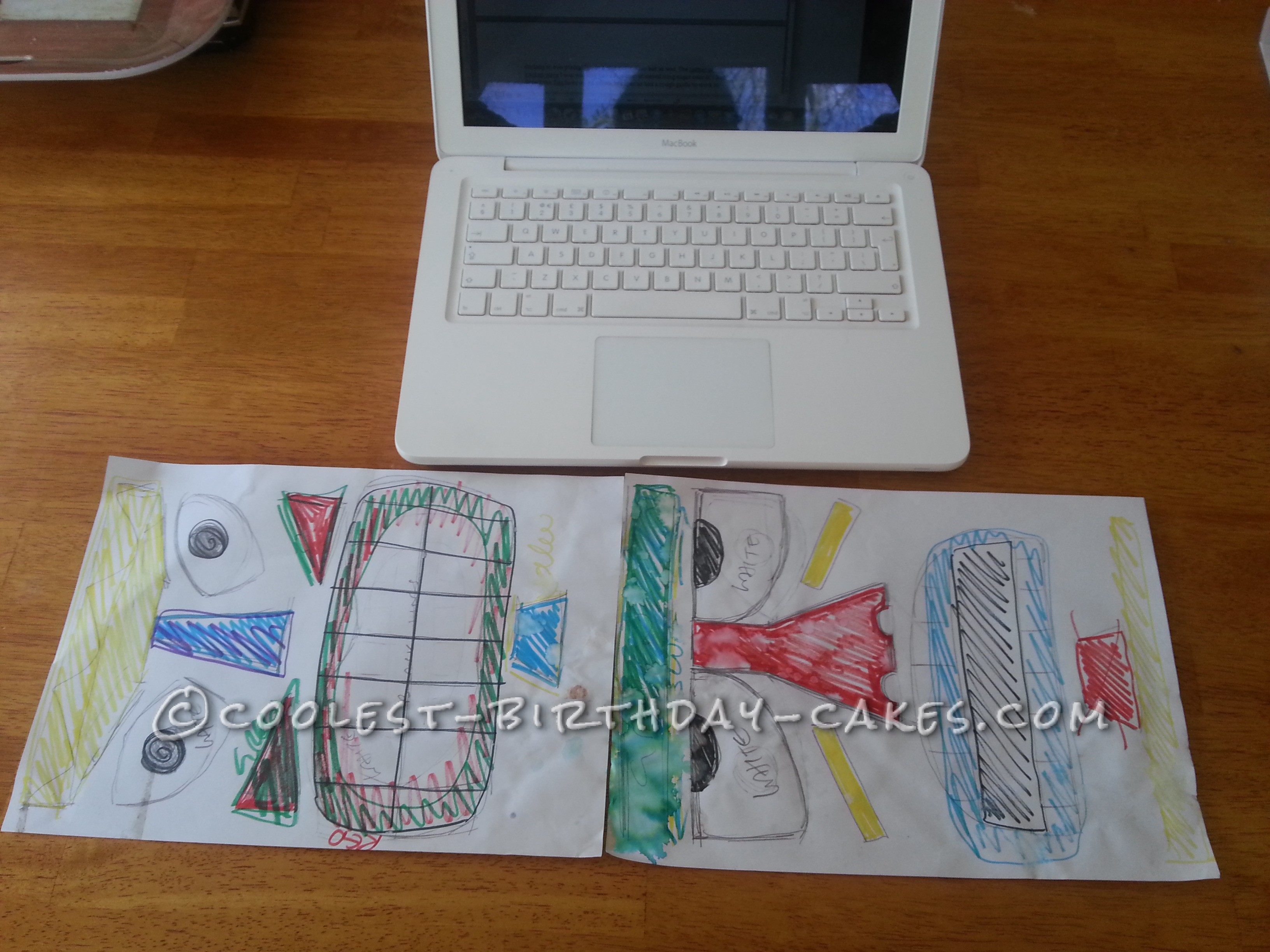 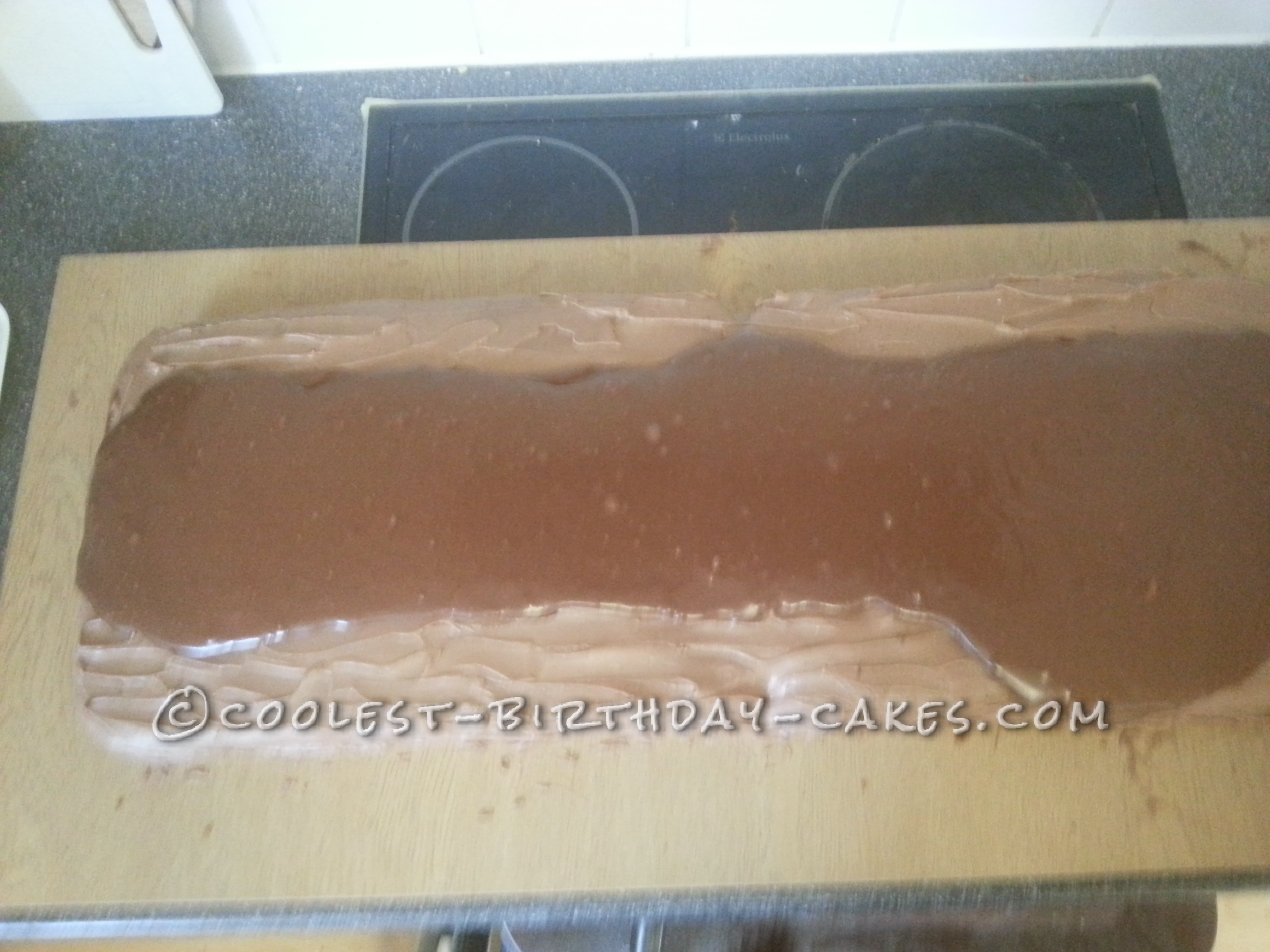