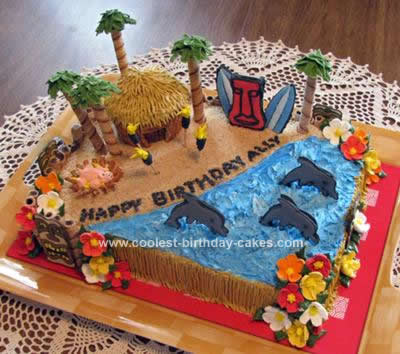 When my niece told me her daughter was having a luau theme for her birthday party and wished she could have a “cool” cake, I offered to make her one. Using your site for ideas, I came up with my own version of a Homemade Luau Birthday Cake with a tropical island, complete with bamboo hut and a roasting pig in a pit.

About a week before the birthday I made some Hibiscus flowers out of royal icing in pink, red, orange, white and yellow. I also made tops of palms trees by molding a piece of aluminum foil over a tiny cup and piping green leaves on the foil to dry. As long as I had the royal icing made, I make a few little Tiki torches on wooden skewers by piping black string work circling the top, and then added some yellow flames using a writing tube tip. I made a tiny pig using a #10 tip.

The next night I mixed up some color flow icing and made the Tiki statue, some Tiki masks, some dolphins and some surfboards. I used clipart for the pictures, printed them out, taped them to cardboard, covered them with waxed paper, then traced and filled in the pictures using the color flow. I did mirror images of the dolphins as I wanted them to stand up on the cake. I also assembled the items I wanted upright on the cake, i.e. the dolphins, the Tiki statue and the surfboards by placing one face down, putting some of the color flow along the edges, placing one or two toothpicks on the icing and then carefully placing another finished piece over it. Then these were left to dry.

I baked a 9 x 13 inch cake. The birthday girl requested a cinnamon cake, so I found a good recipe on allrecipes.com. I then frosted the whole cake with a light coat of white icing. Then I put a second layer of frosting tinted beige over about 2/3rds of the top. I crushed some vanilla wafers in the food processor to use as “sand.” I covered the beige icing generously with the wafer sand. I then made some blue icing not mixing it very thoroughly so some of the white was still visible. I heaped the blue icing onto the remaining 1/3/rd of the top of the cake, peaking it up to look like waves. The trees were assembled by attaching the now dry royal icing leaves to the top of a Pirouette cookie. Since the middles of these cookies are filled, I also pushed a toothpick into the bottom of each “tree” to give it added stability.

The hut was very simple to do. I ran up to Dunkin Donuts and got a blueberry muffin with a nice round top. I iced the sides and pushed pretzel sticks into the icing to make the bamboo. I simply didn’t put any pretzels where I wanted my door to be. I then covered the top of the muffin with straw colored frosting piped on with a #4 tip. Voila, a cute little bamboo hut. I then placed the trees, Tiki statue, surfboards and little pig on the sand. I used broken pieces of pretzel as wood for the fire pit around the pig. I wrote Happy Birthday Ally in dots to simulate stones on the beach. I then stuck the dolphins in the surf.

I made string work “grass” around the sides near the water, and put cut Pirouette cookies around the beach portion to make a bamboo wall. I then attached the Tiki masks to the wall and placed the Hibiscus flowers everywhere to add some color, piped in a few leaves around the flowers and the cake was done.

It was a little bit of work, but the smiles and hugs I received in return made it more than worth the effort. 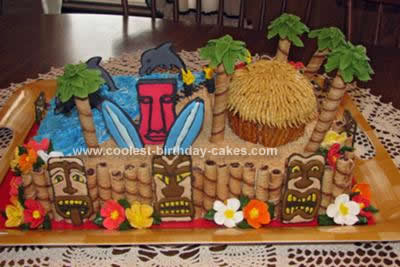 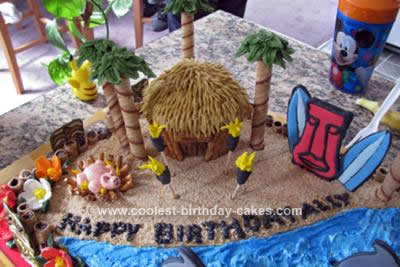 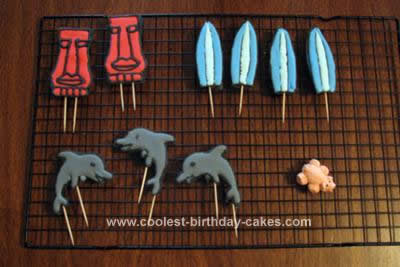